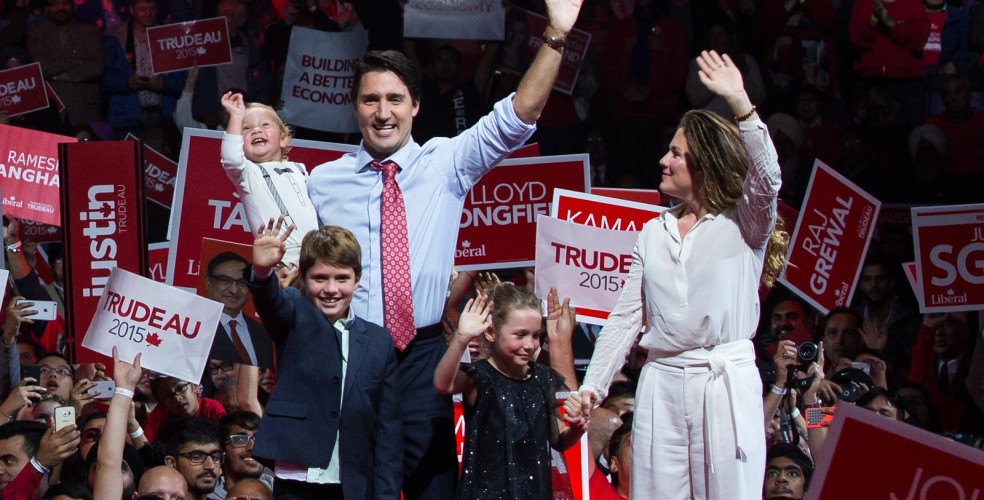 “Canadians from all across this great country sent a clear message tonight,” said Justin Trudeau in his victory speech. “It’s time for a change in this country, my friends. A real change.”

“My friends, sunny ways. This is what positive politics can do. This is what a positive, hopeful vision and a platform can make happen.”

“My friends, we beat fear with hope. We beat cynicism with hard work. We beat negative politics with a positive vision that brings Canadians together.”

Trudeau was seen as an underdog when the election campaign first began, with the Liberal Party coming in third place in most polls. The party has been caught in a tailspin since the fall of Paul Martin’s scandal-plagued Liberal minority government, and tonight he has been credited for turning around his party’s fortunes.

He was re-elected as a Member for Parliament in his Montreal riding of Papineau with nearly 60 per cent of the vote. At this time, his party is expected to win at least 184 seats in the House of Commons while the Conservative will form opposition with 102 seats and the NDP with 41 seats.

During the victory speech that began just after midnight EDT, the 43-year-old also took time to acknowledge the efforts of his opponents, who gave him concession phone calls prior to the speech.

“Stephen Harper has served this country for a decade, and as with anyone who has devoted their life to this country we thank him for his service,” said Trudeau. “Conservatives are not our enemies, they are our neighbours.”

“I also want to pay tribute to Thomas Mulcair who ran a vigorous campaign. He fought right up to the end and to the supporters of his part, I understand your disappointment tonight. Our party had some problems not too long ago, so don’t be discouraged.”

Trudeau also highlighted his massive win in Quebec, where the party has won 40 seats. This is the first time a federal party has a won a majority of the seats in Quebec since Pierre Elliott Trudeau, his father, took office in 1980.

Over the coming days, the transition process between Stephen Harper and Justin Trudeau will begin. The 42nd Canadian Parliament is currently scheduled to open on November 16.

As for the future of the Conservative Party, Stephen Harper has resigned from the position as the leader and the process has begun to select an Interim Party Leader.

Real change has come to Canada, and it’s because of you.

Your knocks and calls. Your donations. Your support on social media. And most importantly, your votes.

From every last candidate, to every last volunteer, donor and supporter, remember: I didn’t make history. You did.

For three years, we had a very old-fashioned strategy. We met and talked with as many Canadians as we could. And we listened.

We beat fear with hope. We beat cynicism with hard work.

We beat negative, divisive politics with a positive vision that brings Canadians together.

Most of all, we defeated the idea that Canadians should be satisfied with less. That good enough is good enough, and that better just isn’t possible.

Well my friends. This is Canada. And in Canada… Better is always possible.

Now, we start on our next challenge: achieving real change for the middle class. And Canadians are counting on us to deliver.

Thank you again for all your hope and hard work.