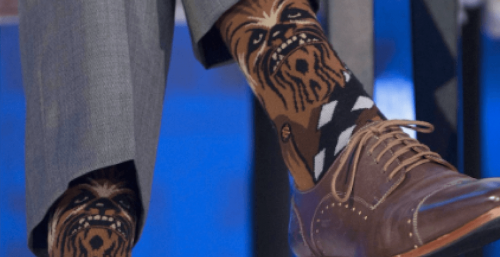 A global business meeting this week was also Canadian Prime Minister Justin Trudeau’s latest chance to “Use The Force,” in the form of sock choice.

And while it’s a given that many important topics were discussed during the event, it was Trudeau’s wardrobe choice that had people talking on Twitter.

Justin Trudeau is wearing a Chewy Socks !! His socks game always A+ .. May the force be with you pic.twitter.com/uWdwDDeaxY

In fact, fellow Canadian and former Star Trek star William Shatner even weighed in on the Prime Minister’s apparel.

@JustinTrudeau I thought we were friends? 😳 Chewbacca socks? 😢 pic.twitter.com/CK6U9hGWkv

Others took the opportunity to compare the style of Canada’s Prime Minister with the style (or lack thereof) of US President Donald Trump.

#JustinTrudeau wore Chewbacca sox at #BloombergGBF.
Trump can’t even wear the right size suit,
or comb his hair,
or tie a tie,
or be human. pic.twitter.com/5ZmrAsVt8a

This isn’t the first time Trudeau’s affinity for Star Wars apparel has come to the forefront of people’s minds.

Back on May 4, Trudeau held a bilateral meeting with Irish Prime Minister Enda Kenny in Montreal, but with that date unofficially dubbed Star Wars Day, Canada’s Prime Minister was going to miss an optical opportunity, even posting a picture to Instagram.

Say what you will, but when it comes to his wardrobe, Trudeau’s fashion is out of this world.