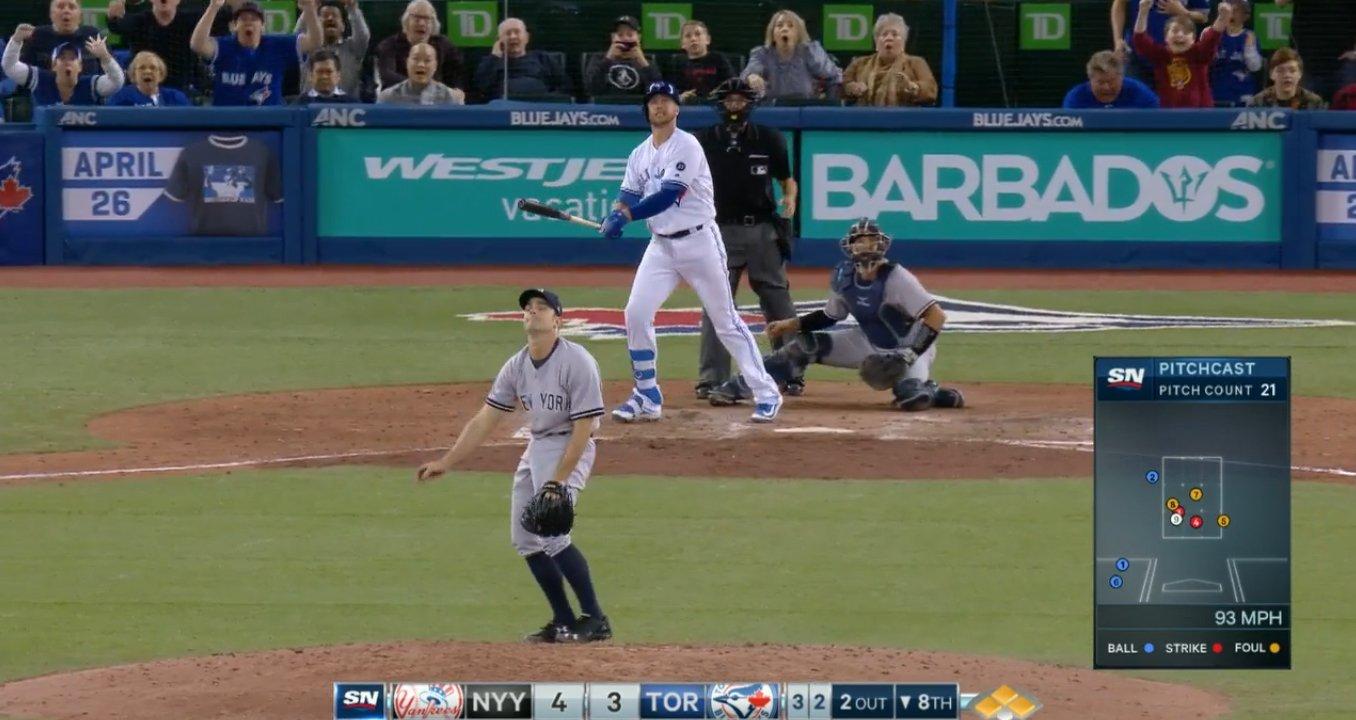 One day after 20,000 fans took home a Justin Smoak bobblehead, the Blue Jays’ first baseman had fans’ heads bobbling in excitement. He also had the neck of Yankees’ reliever David Robertson snap back in regret.

Smoak hit a pair of clutch home runs against the Yankees during the finale of the Blue Jays’ Opening Weekend series against the American League East favourites. Toronto split the series with New York at 2-2, but what got everybody talking was Smoak’s monster home run in the eighth inning.

The looks on the faces of the fans in the first two rows were absolutely priceless. So were the reactions of the guy who threw the pitch (Robertson) and the guy who hit the ball into the stands (Smoak).

This was one of the first fans on their feet right after Smoak connected with the pitch. They were closer to the action than anybody, so when they heard the crack of the bat, these two knew exactly where the ball was going.

Nothing like the double fist pump to illustrate just how exciting a hit is. Mouth agapeness is also a good indication of how exciting that home run was.

Must be a Yankees fan.

“SMOAK GOT 2 HOMERS FOR MY FANTASY TEAM!”

Possibly related to fan number 5 below, she’s the slightly-more-excited version of her possible relative?

You’ll often see the “lady behind home plate” at most Blue Jays games, so she’s seen it all over the years. For her to be awestruck, you know Smoak must’ve hit the ball hard.

“I JUST REMEMBERED I DON’T HAVE TO GO TO SCHOOL TOMORROW!”

There’s nothing better than reactions by little kids at baseball games. This little guy and the young man behind him encapsulate the pure joy of being a baseball fan.

“Why did I throw that pitch?”

Prior to facing Justin Smoak, Yankees manager Aaron Boone chose to intentionally walk Josh Donaldson to load the bases for Justin Smoak. Here’s David Robertson reminding himself to go to his happy place after Smoak went to his.

This is probably the very same reaction Justin Smoak elicits after landing a monster fish or bagging a deer. The fact that he was mid-chew during this swing isn’t all that surprising, either. Smoak’s excitement level only goes up to three anyway, so a two on this scale is actually pretty high.