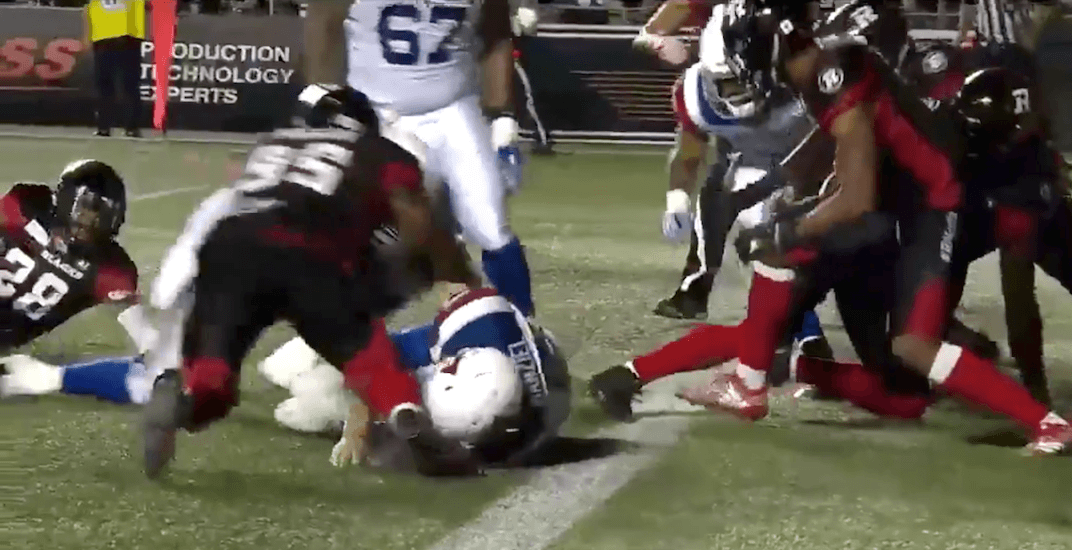 That’s not saying much, as he looked woefully unprepared in Week 8 against Hamilton, completing nearly as many passes to his old team as he did to his new team.

The Montreal Alouettes didn’t beat the Ottawa RedBlacks in Week 9 with Manziel at the helm, though they at least kept it close, losing 24-17. Manziel threw for 168 yards, going 16-for-26, and rushed for 36 yards. He didn’t throw a touchdown pass, but he didn’t throw an interception either.

He came within inches of scoring his first-ever CFL touchdown, looking like a young Doug Flutie when he nearly ran into the end zone after an 18-yard run on quarterback draw.

If getting picked off four times last week wasn’t his ‘welcome to the CFL’ moment, then what happened at the end of this play certainly was:

WHOA! Johnny Manziel takes a hit and the ball comes loose at the goal line — it's recovered by Kristian Matte for a @MTLAlouettes touchdown!#CFLGameDay pic.twitter.com/KEAfJEvg8H

Manziel got rocked at the goal line, causing the ball to come loose. Luckily for the Alouettes, offensive lineman Kristian Matte recovered the ball and scored the go-ahead touchdown.

The former Heisman Trophy winner wobbled to the sidelines, but stayed in the game.

How did he feel?

“No matter what, you’re not going to take me out like that. I’m going to come back and keep fighting.”

Manziel’s third test in the Canadian game will come next Saturday, on the road against the Edmonton Eskimos.