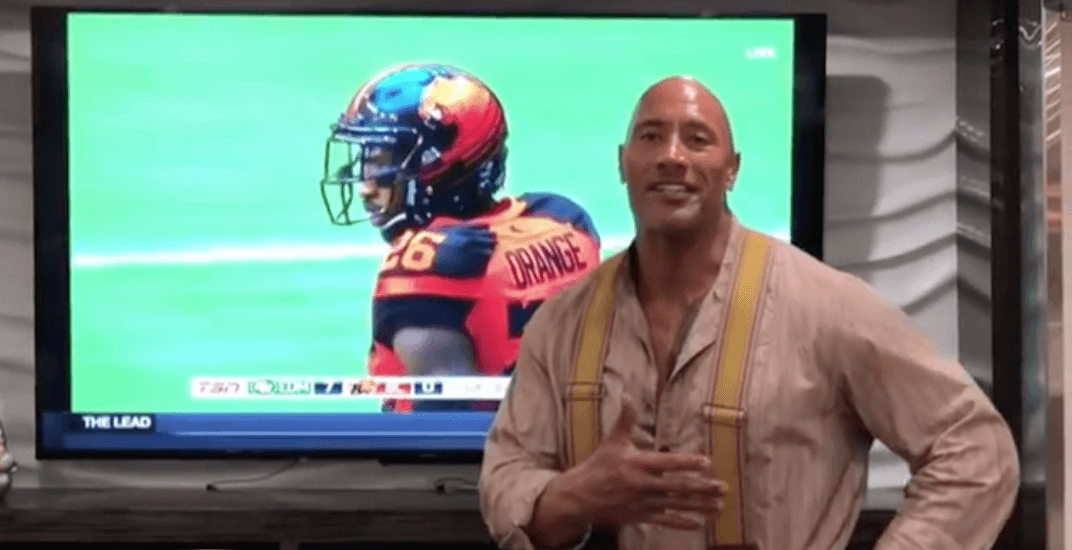 Dwayne “The Rock” Johnson’s dream was to play in the NFL.

A defensive lineman big on heart but short on talent, his path eventually led him to the Canadian Football League.

On the Calgary Stampeders’ practice roster earning $300 a week, the Rock was cut by current BC Lions head coach Wally Buono in 1995. He was sent home with $7 in his pocket, his dreams crushed, causing him to fall into depression.

Dwayne Johnson was on Stamps practice roster in 1995. He later gained fame as a wrestler and actor @TheRock #TBT pic.twitter.com/v704KgwrLq

As it turned out, getting cut was a blessing in disguise for the man known simply as “Dwayne Johnson” in those days. The Rock became the biggest star in professional wrestling and is now one of the highest paid movie stars in Hollywood.

Before getting called to set of his new movie, Jungle Cruise, The Rock tuned into Thursday’s CFL game between the BC Lions and Edmonton Eskimos. He said he did a “triple take” when he saw his old coach and mentor Buono, who is still coaching in the league at 68 years old.

It certainly brought back memories.

The Rock posted a video for his 112 million Instagram followers, expressing his appreciation for the CFL, Buono, and “dreams not coming true.”

“That guy, Wally Buono, was my coach when I played in the CFL for Calgary,” The Rock said, gesturing to his television. “He was a mentor of mine, he ultimately cut me from the team. It was such a defining time and I appreciate that man so much.”

The Rock, who has expressed his appreciation for Buono before, also wrote a lengthy accompanying message on Instagram, intended to inspire others:

Cheers to dreams not coming true.

Not an easy concept to process, but the idea that sometimes our biggest and most important dreams that DON’T COME TRUE are often times the BEST THING that never happened. I’m shooting JUNGLE CRUISE now and right before I get called to set, I look up and see a CFL (Canadian Football League) game on my TV.

I do a double take and realize that’s the same field I played on when I played in the CFL.

I do a triple take and see the very man who coached and mentored me, but ultimately had to cut me from the team, Wally Buono who is now head coach and GM of the BC LIONS in Vancouver.

Playing ball, I was always the “hardest worker in the room” and did everything I could to make the CFL and then hopefully, make it to the NFL where I dreamed of having an All Pro/Super Bowl Champion football career.

Instead, I was cut from the team, told I wasn’t good enough – and sent home with $7 bucks to my name.

After years of blood, sweat, guts and tears, my dream was over.

Fell into depression, didn’t know what to do or where to turn. Eventually, I picked myself back up again, said fuck this and refocused and committed myself to a different path.

I’ve been there, so I encourage you to keep working hard and remember that sometimes our dreams that don’t come true, can ultimately become the best thing that never happened.