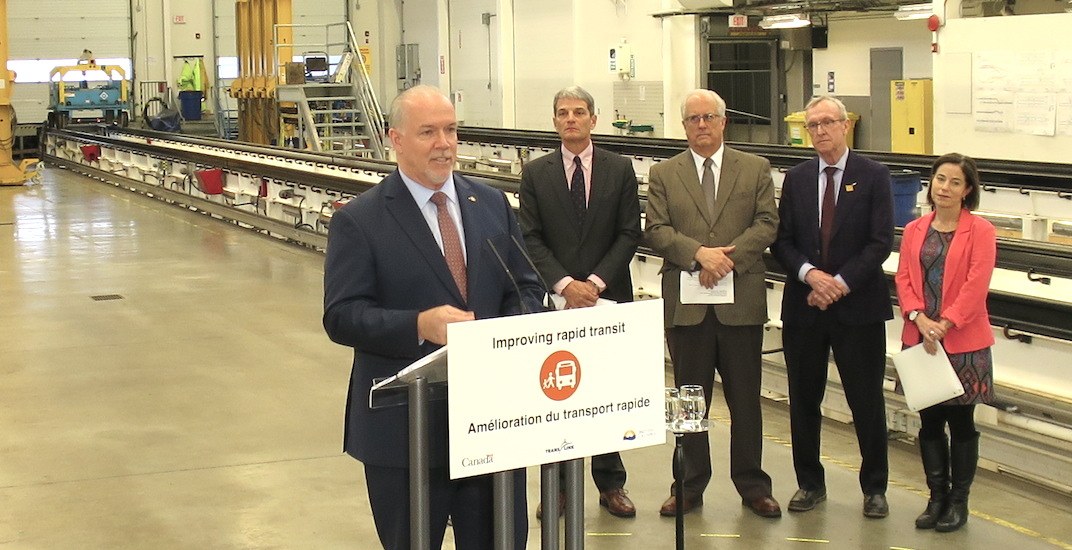 Premier John Horgan at the announcement of the fast tracking of SkyTrain car orders on February 23, 2018. (Kenneth Chan / Daily Hive)

When asked directly today during a SkyTrain car order media event on whether the  provincial government remains committed to funding the construction of the underground SkyTrain extension of the Millennium Line to Arbutus and Surrey’s new light rail transit system, his answer was “absolutely,” adding that it would entail fulfilling the complete Mayors’ Council plan that includes more bus service.

“We have to always keep it at the centre of discussion on why we’re doing this,” said Horgan. “For about four years now, there has been a lack of progress on a comprehensive plan. I believe the Mayors’ have worked tirelessly to come up with a plan that works for everybody.”

The multi-billion dollar Phase Two plan relies on the provincial government funding 40%, the federal government with another 40%, and TransLink with 20% through new revenue sources that need to be approved by Victoria.

“We’re prepared to get going,” he said. “We’re in negotiations now on some of the subtleties of where TransLink and the Mayors’ Council will get their 20% from, and that is ongoing.”

The negotiations are expected to lead to an agreement sometime next month.

Horgan also said the provincial government has already shown its commitment to the plan by taking over the responsibility for the Pattullo Bridge replacement from TransLink, which can no longer rely on tolls to fund the project due to the BC NDP government’s new policy that removes tolls as an option. The bridge project was previously part of the Mayors’ Council’s Phase Two plan.

“We’re committed as a province to meeting our 40% obligation to Phase Two of the Mayors’ Council plan, and we started by taking over the Pattullo Bridge to make sure TransLink is not crippled by an overwhelming debt to replace a bridge that is well past its best before date. Budget 2018 has allocated $600 million for that project and there is more money allocated for Phase Two of the Mayors’ Council plan.”

The provincial budget includes a $1.18-billion line item for “Transit Infrastructure” for the three-year period between 2018 and 2021. The Mayors’ Council has called this a “down payment” for Phase Two, with the assumption that the remaining $1 billion from the province will come during future budget cycles between 2021 and 2025 while the projects are still under construction.

Horgan was also questioned over why the $3.5-billion, 10-lane bridge to replace the George Massey Tunnel was removed as a line item from the budget. He reasoned that he is following the Mayors’ Council list of priorities.

Although the provincial government has identified the Pattullo Bridge as a much greater priority, it acknowledges the existing Massey Tunnel is also a problematic crossing that needs to be addressed.

“We are having a congestion challenge at the tunnel and the Ministry of Transportation is looking at that and other mechanisms to make sure that we can relieve that for the people of the region,” said Horgan.

“But we want to be guided by the hard work of the Mayors’ Council who have worked tirelessly on what will work for the region. That’s not to say the Massey replacement is not a high priority, but the Pattullo Bridge is falling into the Fraser River. That takes precedent at this time.”

Horgan said Claire Trevana, the BC Minister of Transportation and Infrastructure, will release a policy paper on the provincial government’s position on the replacement “shortly.”