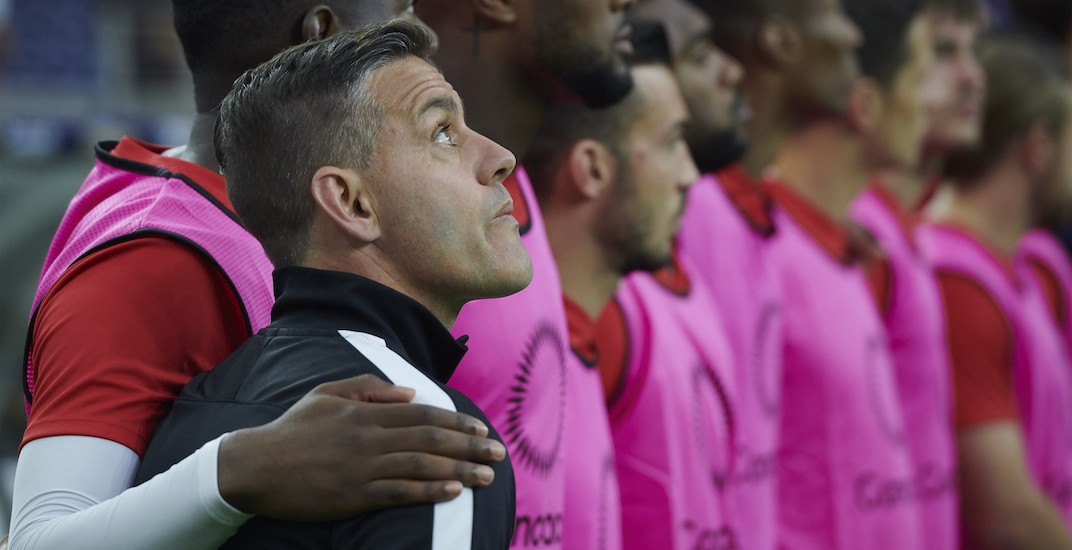 After a long stretch of positive play and optimism under new head coach John Herdman, it all came crashing down for the Canadian National Soccer Team at the Gold Cup this summer.

Canada squandered a 2-0 lead to Haiti in the quarter-finals, losing the match 3-2, essentially undoing all the goodwill for Herdman’s young team.

In the aftermath, Herdman drew criticism for his tactics and substitutions – the first time the heat has been on the former Canadian Women’s National Team coach since he was hired to run the men’s program in January 2018.

The 44-year-old raised eyebrows Saturday when he spoke live on TSN during halftime of Toronto FC’s match against FC Cincinnati. In an effort to explain the challenges Canada faced at the Gold Cup, Herdman inadvertently drove a bus over his defence.

“If you put it on paper, it’s a Tier 3 back four, and a Tier 1 front four in Concacaf. That’s the reality,” said Herdman. “I’ve got a back four that doesn’t get regular minutes, that are young, and haven’t really made their mark on the international, or even national domestic stages yet.”

“That takes time,” Herdman continued. “We have to buy that time, but you don’t get time at international level. You’ve genuinely got to try and find some ways of protecting some of those weaknesses and making sure that we can give those younger players the opportunity they need.”

A Canada Soccer spokesperson clarified what Herdman meant in a phone conversation with Daily Hive, saying his comments about “tiers” were in reference to the different level of football leagues his players play in around the world, and not the tier level of his back four defenders.

Herdman’s view of tiers, according to the spokesperson, consists of the following:

It should be noted that much of 85th-ranked Haiti’s roster does not feature players in what Herdman would describe as leagues in the top three tiers, while Canada’s talent pool consists primarily of MLS players.

Overall, Herdman’s comments were eyebrow-raising for many.

Does it make sense for the head coach, who is known as a masterful motivator, to go on national television and rate his back-four as Tier 3? It can be hard to build confidence, trust, and camaraderie with those sorts of remarks.

Herdman selects the players, and tactics suited to try and beat the opposition. If there are defensive woes, it should be on Herdman and his coaching staff to fix those internally and not voice those concerns on live TV.

There were a few red flags over this quote from Herdman on the #TFCLive broadcast last night.

Not enough room to expand on those thoughts in a tweet, so I attached a screenshot of them.#CanMNT pic.twitter.com/36TdfFcOTj

If Canada’s back four is considered a weakness, surely it would make sense to schedule more international friendlies to try and find a solution to defensive challenges. But as Canada gets set for crucial home and away Concacaf Nations League matches against Cuba and the United States this fall, there are no plans for future friendly matches. The defensive issues that exist could linger into the next competition.

Canada’s defence will have to hang tough if they’re going to qualify for the 2022 World Cup in Qatar.