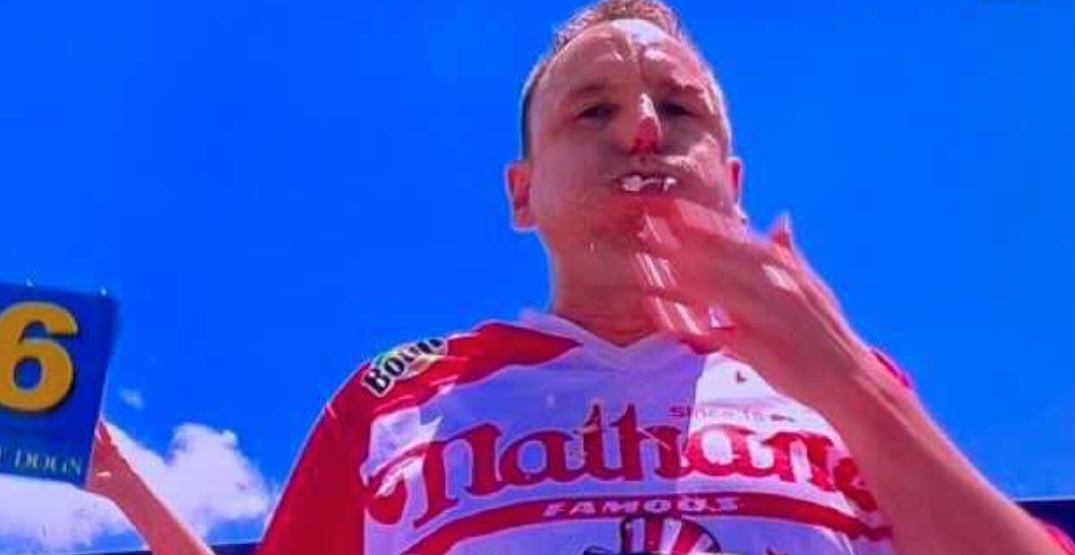 Heck, he might even be the greatest American, period.

At his annual July 4 appearance at the Nathan’s Hot Dog eating contest on Coney Island, 37-year-old Chestnut topped his own world record by chowing down on 76 hot dogs (and buns) in just ten minutes. Last year, Chestnut set the record once again with 75.

Chestnut’s entrance to the event was something straight out of the professional wrestling playbook. Have a watch below as he gets hyped up in front of a cheering crowd:

This entrance from Joey Chestnut is wildly incredible 😂 pic.twitter.com/WWG2Dl94kd

Joey Chestnut first competed in the annual contest way back in 2005. Since then, he’s become the world’s best-known competitive eater, with his annual Independence Day performances the stuff of legend.

Unfortunately for households across the US watching the ESPN broadcast (and in Canada watching on TSN), Chestnut’s performance was marred with technical difficulties multiple times in the second half of the contest.

The feed cut out again in the final minute as Chestnut was breaking the record.

Chestnut has now won the event 13 times, including wins every year since 2016. He also won eight straight events from 2007-14, before Matt “Megatoad” Stonie ended his reign with an upset victory in 2015, eating 62 hot dogs and buns to Chestnut’s 60.

Takeru Kobayashi won the event six times from 2006, and formed a decent rivalry with Chestnut in the mid-2000s. He hasn’t competed in the July 4 hot dog event since 2009 however, as he is unwilling to sign an exclusive contract with event organizers Major League Eating.

Before you wonder if the whole deal is just a waste of food, it’s not without a good cause. Nathan’s donates 100,000 hot dogs to local food banks each year as part of the event.