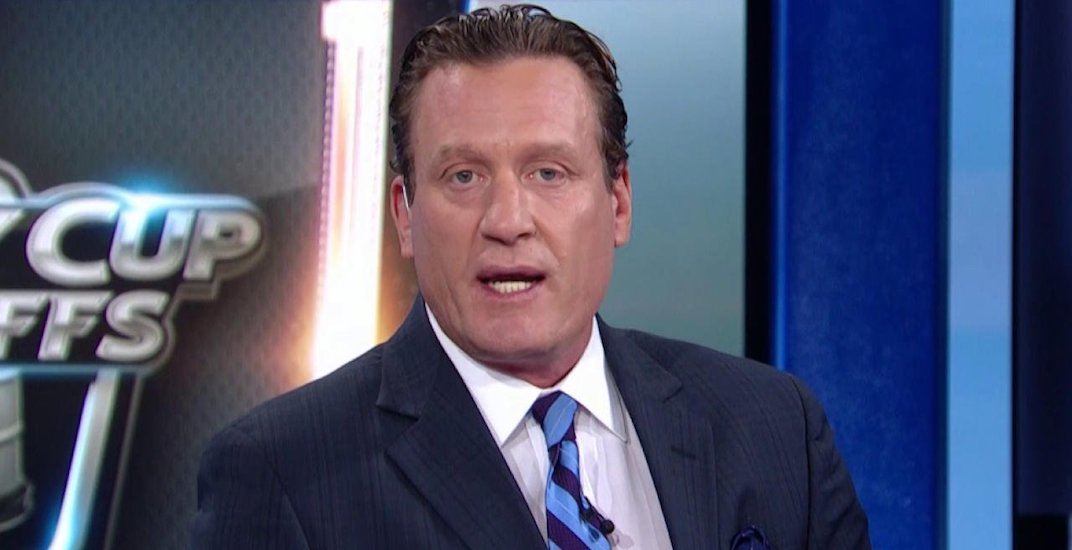 Never one to mince his words, Daily Hive caught up with retired NHL star and NBC Sports analyst Jeremy Roenick in Chicago last week. The outspoken NHLer sees a bright future ahead for a Vancouver Canucks franchise that’s looking to return to prominence.

Few believed the Canucks would be a competitive team this season and yet here they are, competing for a playoff spot. Roenick credits one of his former teammates for part of the team’s resurgence.

On his old teammate, Travis Green

“He was one of my old roommates,” Roenick said of Canucks head coach Travis Green, who was his teammate with the Phoenix Coyotes from 1999 to 2001. “One of my best friends, I love him. It is a real tough job. Especially in a city that demands a lot from their team, and they haven’t got much success.

“I think he’s doing an amazing job. He did a great job in the minors, and I think he’s earned his job there (Vancouver). He has a very keen ability to get a lot out of his players, get them to work hard every night, and play a system. I truly think he’s one of the better coaches in the league. In a couple of years, give him a couple more players… obviously they have Boeser, and Pettersson. He’s really going to have this team rolling on all cylinders.”

The Canucks don’t have all the pieces yet to contend for a Stanley Cup, but they could certainly pick up a prospect or a draft pick for Alex Edler. The pending unrestricted free agent has until February 25 to waive his no-trade clause.

Should Edler waive his no-trade clause?

“I think he should,” Roenick said. “I think when you’re in the league for a long time, and you might have a chance to win a Stanley Cup, [you should do it]. He’s one of those players, a lot of teams would look at as great addition to a team trying to make a Cup run. You could get some real good quality back for him.”

Now in his 13th season with Vancouver, Edler is quite comfortable with the only NHL franchise he has known. That’s not a reason to stay according to Roenick, who played 1363 NHL games with the Blackhawks, Coyotes, Flyers, Kings, Coyotes, and Sharks.

“Comfort is always an athlete’s worst nightmare,” Roenick began. “It’s your worst enemy. Being comfortable means you’re probably not going to play to your best standards. I would never look to be comfortable, I’d look to want to win.”

Pettersson impresses him too

The Canucks are only going to go as far as Elias Pettersson can take them – that much is obvious. No longer just a Vancouver secret, Roenick knows all about the 20-year-old phenom.

“He unbelievable,” Roenick said. “He reminds me a lot of the way Alex Mogilny use to play. Really fluid, really good skater, amazing shot, a really good hockey sense. He can control a game in such an early part of his career.”

Pettersson was a fifth overall pick by the Canucks in 2017. With Brock Boeser and Bo Horvat also acquired through the draft, Roenick sees a parallel with some recent Stanley Cup winners.

“You look at what happened with Chicago. Chicago got Kane and Towes in back-to-back years, and they go on to win Stanley Cups. Pittsburgh did it with Crosby and Malkin. That’s really important when you talk about building a team or a dynasty. Getting a couple of guys that are superstars that you can build around. Those two guys are definitely up there in the same stature.”

It’s too early to say if the same will happen with this group Vancouver one day.

“You can’t hide,” Roenick said, of playing in Vancouver. “You can’t hide from the media or fans if you’re playing bad. It makes it hard to live there. The fans obviously want to win, and they’ll make you accountable. It’s one of the most beautiful cities in the world and one of my favourite cities.”

“I hope they start winning, because I want my buddy Travis Green to be really really successful.”