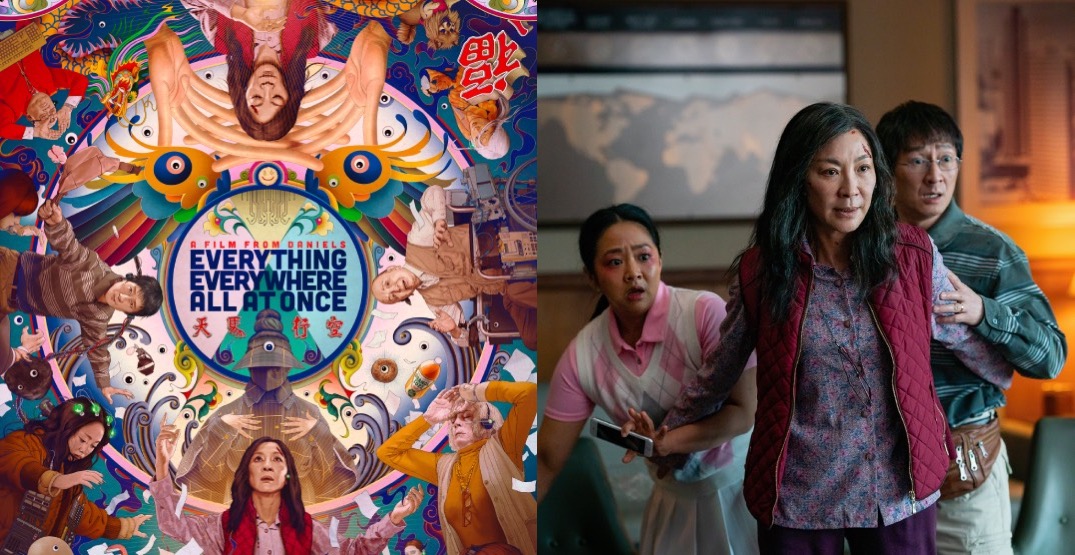 His legend was immediately realized when he first appeared as Short Round, the sidekick to Harrison Ford’s archaeologist explorer in Indiana Jones and the Temple of Doom.

His follow-up role? Data in the still loved and admired Steven Spielberg written and produced movie from 1985, The Goonies.

After these two massive parts, Quan floated around different projects, like Encino Man, Red Pirate, and the popular TV show Tales from the Crypt. For nearly 20 years, Quan had seemingly taken a break from acting — until now.

In his new movie, A24’s Everything Everywhere All At Once, Quan plays a supporting role to the inimitable Michelle Yeoh (Crouching Tiger Hidden Dragon, Crazy Rich Asians). It’s a time jumping, universe hopping thrill ride with as much fun imagination and rule-breaking as heartfelt moments and existential exploration.

Since premiering at South by Southwest in Austin, the buzz has been huge for this movie directed by the duo of Daniels (Dan Kwan and Daniel Scheinhert).

The movie opened this week with a 97% critical and 94% audience rating on Rotten Tomatoes, an 82/100 on Metacritic. It amazingly just became the single highest-rated movie OF ALL TIME on the hugely popular Letterboxd site.

Ke Huy Quan talked to Daily Hive about his early film career, what made him rethink his place in Hollywood culture, what brought him back, and what this new film has meant to him.

“When I was in my early 20s, I made the very difficult decision to step away from acting because there was just not a lot of opportunities for me at that time,” Ke Huy Quan told Daily Hive in a video interview.

“I remember all I did was wait for the phone to ring, and it rarely rang. So I stepped away.”

Representation in film matters so much because even for an established actor like Quan, not seeing yourself up on the big screen tells the world there is nothing for you. That changed for Quan in 2018 when he first saw the smash hit Crazy Rich Asians.

His love for the story wasn’t the only reason Quan cried while watching the movie.

“I cried because I had serious FOMO to be up there on the screen with my fellow Asian actors. It was a movie I had never seen before. It was a movie that I wanted to see for many, many years, but no one…no one wrote that script.”

“No one gave us that opportunity, and it was really then that the idea of acting started taking place,” he explained.

After 20 years without having an agent, Ke Huy Quan got representation. Just two weeks later, the two directors, who adorable go by the single name Daniels (Swiss Army Man), auditioned Quan for the role.

“I was really nervous. I haven’t auditioned for decades.”

A few long months went by, and Quan got the answer he wanted in what seemed like a comeback for even its Hollywood own story.

“Luckily, they liked it, and here I am talking to you, which is incredible. I’m still processing how all of this came to be.”

Quan’s audition process had been scary, as it had been so long, but his experience kicked in when the Daniels began directing him.

“I did my scene, and they said, “Ke, okay, can you do it again? But can you try this” I did it a second time, and as the camera was rolling, they were giving me notes and giving me directions and taking it to different places,” said Quan.

Muscle memory, talent, and a passion for acting kicked in for Quan, just like they had when he walked on his first set at the young age of 12.

“In an instant, it felt so familiar. I flashed back to the days when Steven Spielberg was directing me.”

“Just hearing the soothing voice behind the camera giving me notes, and I relaxed a bit, and I was able to do what I did,” said Quan.

“It was really cool to be directed by the Daniels. They are brilliant, brilliant directors and such great writers too.”

The Daniels are certainly making waves as new talents, turning down Marvel TV shows to focus on their own original scripts. It’s rare to see, and they seem to be wonderfully suited to making idiosyncratic stories with depth and joy.

Everything Everywhere All At Once is a story about a laundromat-owning Chinese couple living in America. So it sounds like a run-of-the-mill drama, right?

Without giving any of the themes or beats of the story away, it’s a movie that uses the multiverse to explore who we could be, what could be, and what we hoped we could have been within a family that feels as distant as the universes that separate us.

It sounds heavy, which at times it is (and wonderfully so), but seeing each universe and how one transports to another feels as emotionally honest as it does absolutely bonkers.

Quan, a martial artist himself, has a John Wick, Bruce Lee, Jackie Chan-esque fight scene all done with HIS FANNY PACK.

It’s a story with so much emotional and physical jumping around, like characters crossing into universes where they are literally played by unmoving rocks, to totally different worlds that require them to shove something in their butt just to alter the timeline enough to change the outcome of their lives. It’s an exciting frenzy that could have easily seemed overly ambitious on the page.

Not to Ke Huy Quan.

“It was one of the most beautiful scripts I’d ever read,” he said.

“It was funny; it was emotional; it was action-packed; it was entertaining. It was all of those that you would ever want in a movie.”

“So when I read the script, I got it. I understood it. And I was very curious to see how they would realize those words on the page and put it up on the screen, and honestly, we all trusted the Daniels. We placed all of the trust in their hands.” 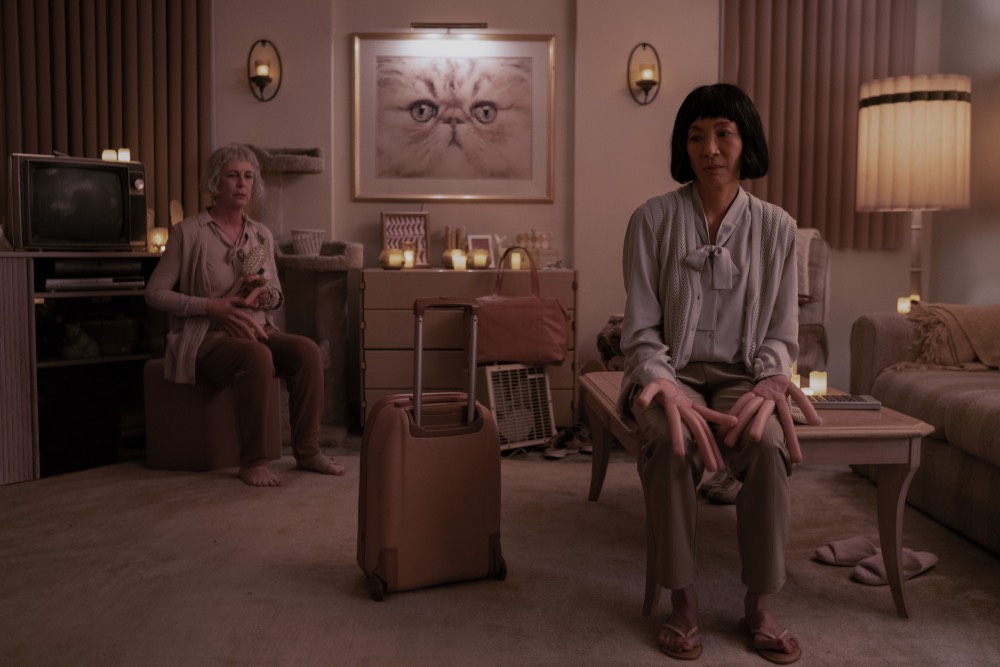 One of the most serendipitous aspects about Ke Huy Quan landing a leading role in a new movie that has become such a hit is that it’s supporting Michelle Yeoh, who was his inspiration for returning in the first place.

“To be able to do my first movie in more than 20 years with Michelle, who is the reason I got back into acting in the first place, was incredible.”

“I remember meeting her on the first day we did a table read. I said “Michelle…the reason I’m here is because of you, because of your movie Crazy Rich Asians” so to do this with her was another added layer of beauty,” he continued.

For Quan, seeing that movie and realizing that “an Asian male can also be the romantic lead” was even more proof of what he hoped to see.

“Prior to that, a lot of the roles were just very stereotypical and very marginalised,” he added.

“I was thrilled, and I was so grateful to see the Asian representation that we had that we’ve been seeing in the past few years — Fresh Off The Boat, Crazy Rich Asians, Shang Chi, now we get to be superheroes too,” added Quan. 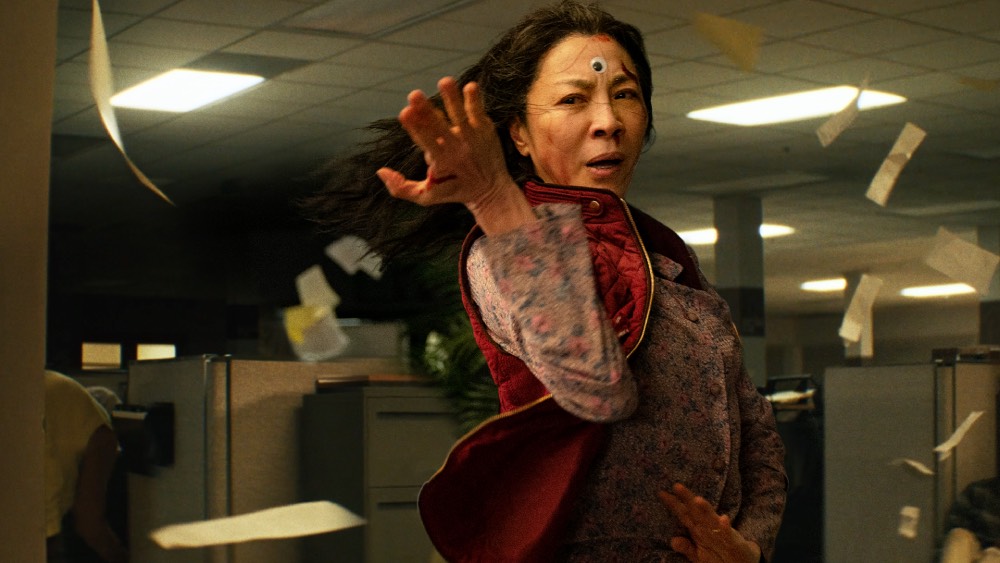 It has felt like a huge step forward lately for Asian representation in film, and it feels like something of a comeback for Michelle Yeoh as well.

From playing the reserved warrior Yu Shu Lien in Crouching Tiger Hidden Dragon, to the total badass Wai Lin in Tomorrow Never Dies, and having fun in Kung Fu Panda as the voice of Soothsayer, Yeoh has always been able to bring a lingering intensity to a scene whether she is having tea across the table or jumping out of helicopters.

“I don’t think I could have done it with anyone else but her. “Her generosity, her amazing talent, really helped me in a lot of ways. I’m still processing how all of this came to be honestly. It’s quite incredible.”

With so many recent films like Spiderman: Into The Spider-Verse, The Matrix:Resurrections, and the upcoming Dr. Strange movie, multiverse stories are bigger than ever right now. One would be forgiven for feeling fatigued from crossing so many planes of existence.

Thankfully, Everything Everywhere All At Once feels like more of an exclamation point on the film movement, a proof of the concept, and an inventive way to show us what it means to be human — even if there are an infinite number of ourselves.

Cross the multiverse yourself, wear your favourite fanny pack, and check out Everything Everywhere All At Once in theatres right now.