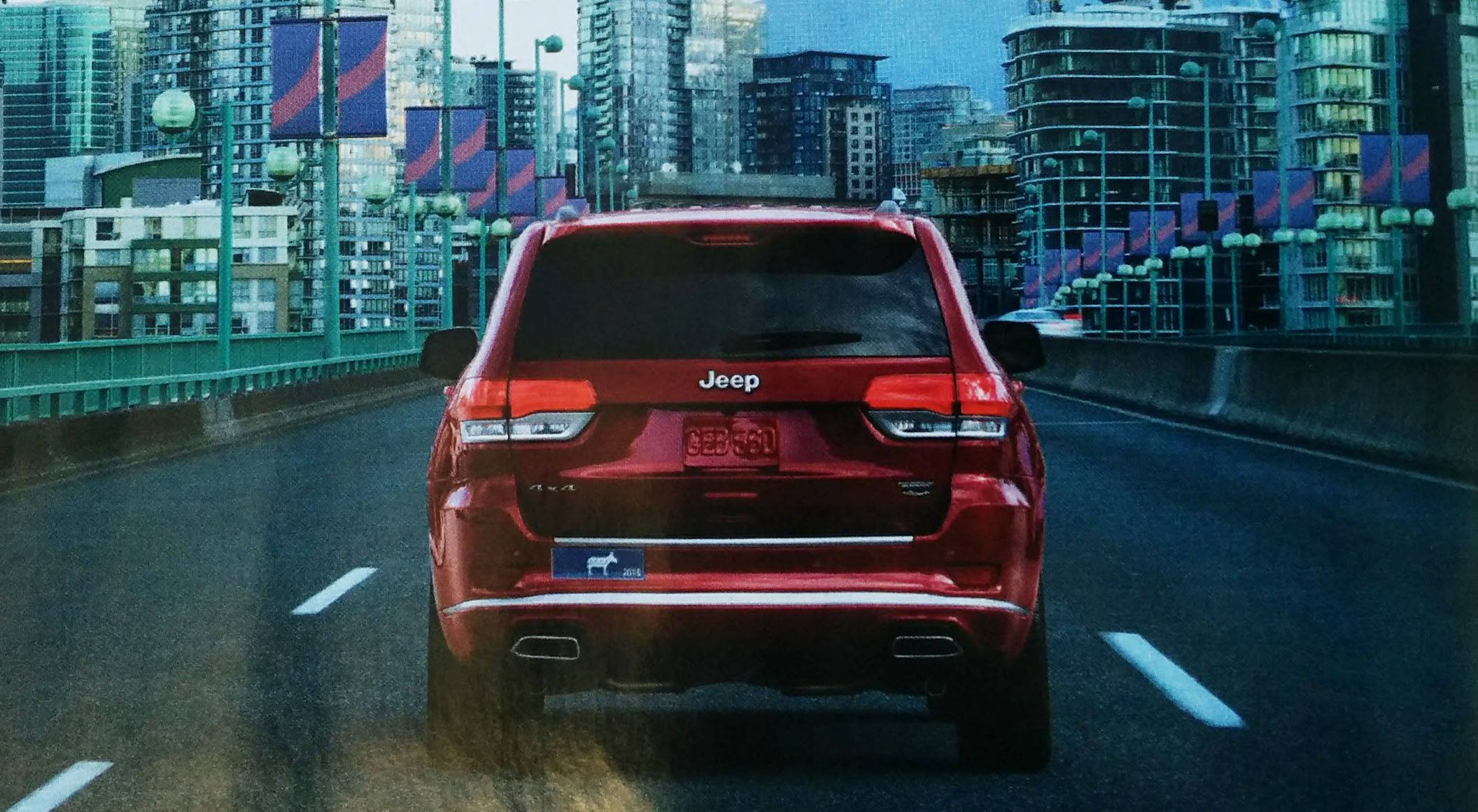 Here in Vancouver we all know we live in the True North Strong and Free. And it seems Jeep wants a piece of Canadian action too, now Donald Trump is US president-elect.

You see, the all-American car brand’s latest ads to splash across the pages of The Economist and Vanity Fair happen to bear a striking resemblance to our beautiful city.

The Jeep ad declares “America is a melting pot made of different cultures. And what we offer to all is the right to life, liberty, and happiness.”

The only problem with this all American love in is that it’s all set against an unmistakable backdrop of Vancouver’s Cambie Street Bridge, BC Place, the North Shore mountains and a myriad of high rise condo buildings. 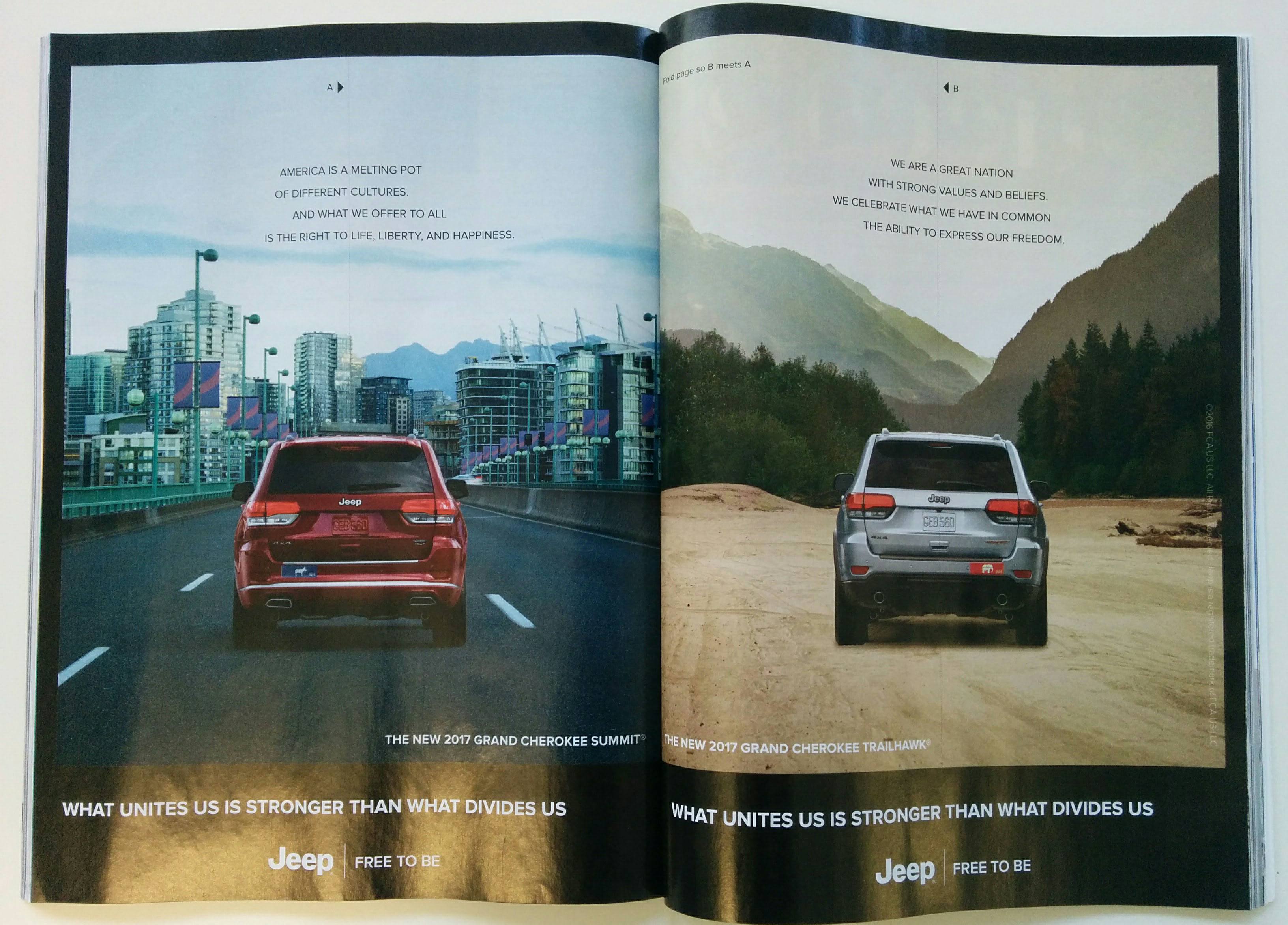 The image was part of a double page spread – on the left, a Jeep displaying a Democrat donkey bumper sticker, on the right, a Jeep bearing a Republican elephant sticker.

In The Economist, Jeep got even more overtly political, an extra page. The Democrat/Vancouver side displayed the phrases “I ♡ Animals”, “Make Love Not War”, and Together”. 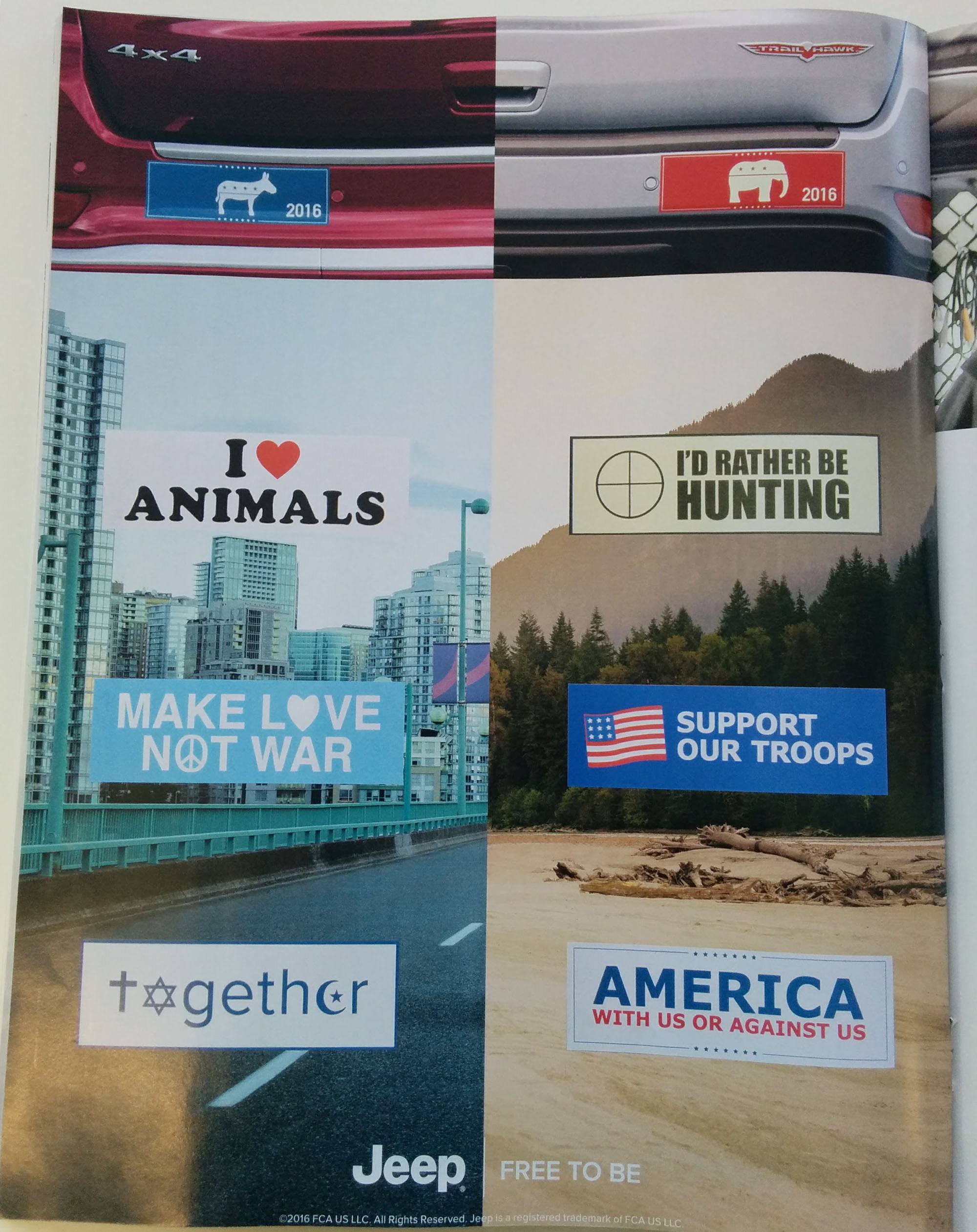 Meanwhile, the Republican side of the extra page is set against an unidentified sandy, forested backdrop, which looks suspiciously like Canada’s Pacific Northwest.

The choice phrases they associate with that are “I’d Rather Be Hunting”, “Support Our Troops”, and “America: With Us Or Against Us.”

The whole thing has caused much amusement online, where Twitter users ridiculed Jeep’s attempt to pass off Vancouver as America.

“America is a great nation made of different cultures” reads this double page Economist pullout Jeep ad that could not be more in Vancouver. pic.twitter.com/o0PV0igvPS

@Jeep nice ad about america other than the fact that this was shot in vancouver, canada. #wrongcountry pic.twitter.com/xQeWD1rrL8

I think this @Jeep got lost! Calls #Vancouver #BC the ‘American melting pot’ in @TheEconomist ad Nov. 12-18/16. Drove a bit too north, eh? pic.twitter.com/GzHVOHTKOo

What can we say? Maybe it was wishful thinking. Maybe it was subliminal messaging. Maybe the Americans really are heading north. Well, you’re welcome America.