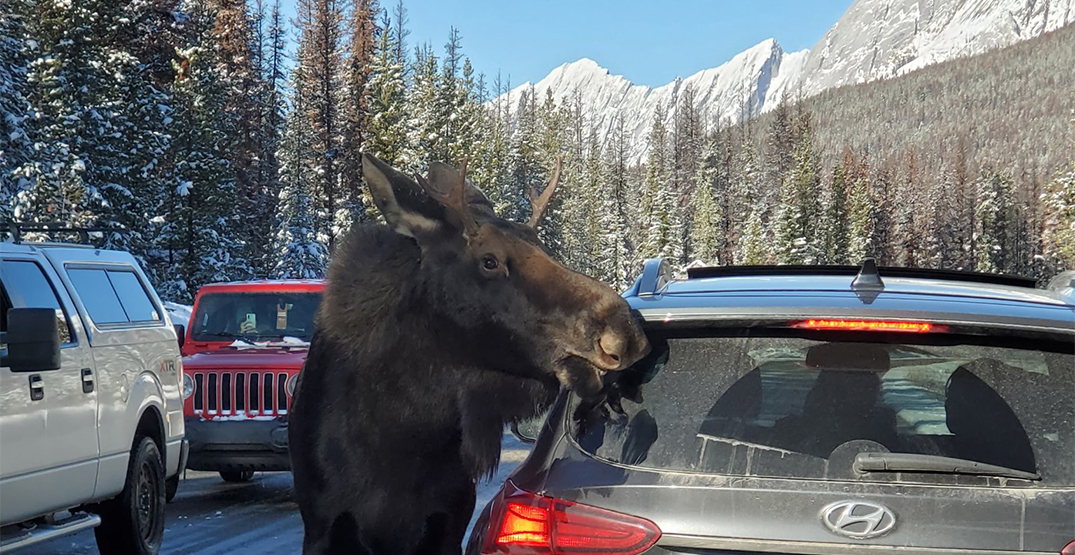 Staff in Alberta’s Jasper National park have come up with a creative new way to get visitors to stop letting moose lick their cars.

That’s right; the moose find ice-melting road salt delicious — a salty winter snack, if you will. The animals approach cars in the national park to lick it right off the tires or the rearview mirrors, as Twitter user Sandi Williamson captured in a photo earlier this month.

Yes, that’s alright. I’ll attach another of you would like to use it as well pic.twitter.com/nfdWZZEF6d

But the park is asking tourists not to let moose do that because moose that get habituated to cars can be dangerous. There’s a new repurposed road sign in Maligne Valley this year — an idea from an enterprising park ranger, Jasper’s public relations and communications officer Steven Young told Daily Hive.

“Do not let moose lick your car,” it reads in both French and English.

“When they start to approach you, that’s where we want you to hit the gas pedal,” said Young.

“The moose gets comfortable [with] people, and people may want to get a good selfie of them, might try to pet the animal all kinds of stuff.”

But a moose weighs about 800 pounds, and if they’re not scared of cars, they may wander into the road more freely, where they might get hit and damage a driver’s vehicle or the driver themselves. Moose are typically a dangerous animal to hit because they’re so tall. If the animal’s legs get knocked out from under it, its body could come crashing through the windshield.

Moose need salt as a mineral in their diet, and usually, they get it from salt licks, which are mineral deposits found on some rock formations in the park. But salt on cars is apparently very accessible and just as tasty.

“It’s more the side effects than the actual licking,” that’s dangerous, Young explained.

The park uses a different road salt mixture than cities with more sand and less salt, but the moose still love licking it.