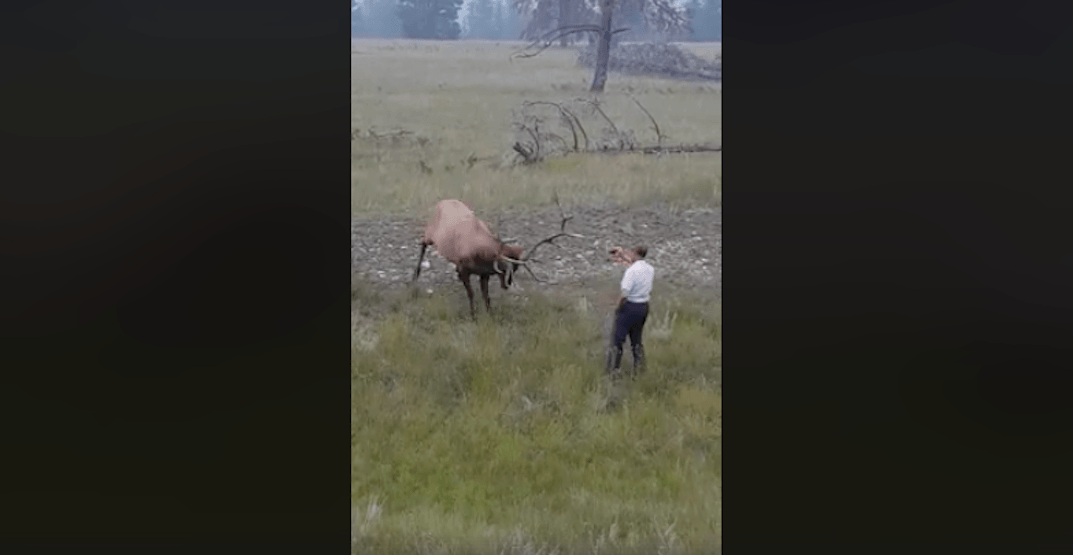 Canada is one of the most beautiful countries in the world, so it’s no wonder that people from all around travel to our red, white, and notoriously polite country to take in the natural scenery.

Some of the best sight-seeing can be done in Canada’s many national parks, with Alberta’s Jasper National Park being up there as one of the most picturesque.

But, along with the stunning mountains and lush forests, there are also animals that we share the land with, and some sight-seers may not know the proper boundaries when encountering those that call the forest home.

On August 23, a large elk was seen by a wildlife tour in Jasper National Park. While the 20 or so people on the tour remained by the road, one man — who had been driving with his family and was not on the tour — decided to walk up to the significantly larger animal.

“This guy was not part of my group, he was in a rental car too, so most definitely a tourist,” said Sundog Tours guide Kendra Neef Nace in a message to Daily Hive.

“I had seen the elk run and charge at a few people that day already, so I warned him and his family to stay back and keep some distance before I started filming.”

Neef Nace can be heard in the video telling the man to run away from the elk when it started showing signs of aggression towards him.

“When the elk started shaking his head I started yelling out the window for him to back up. He waved me off multiple times with a big smile on his face.”

Neef Nace shared the video on Facebook as a warning for other people who may not understand how dangerous getting too close to wild animals can be, both for themselves but also for the animal.

She said that elk have been known to cause damage to property and injure people in the area, with three cars being punctured by a bull elk over the past few days, and a woman being attacked two weeks ago by a cow elk. The elk was destroyed only a few days after the incident, according to Neef Nace.

“[That] is my big reason for sharing and spreading the word. These animals don’t deserve to die for reacting to a situation we as humans have put them into. Especially in the National Parks!”

It was lucky that the man in the video was not injured during his encounter, but Neef Nace said that it wouldn’t have been a surprise if the situation took a dangerous turn.

“It’s mating season for the elk. So there are signs posted all overJasperr to tell you that the bull elk are very dangerous for the next few weeks while they chase the ladies around,” she said.

“This is a very constant struggle in the park this year. Bears, elk, moose. It’s all the same.”