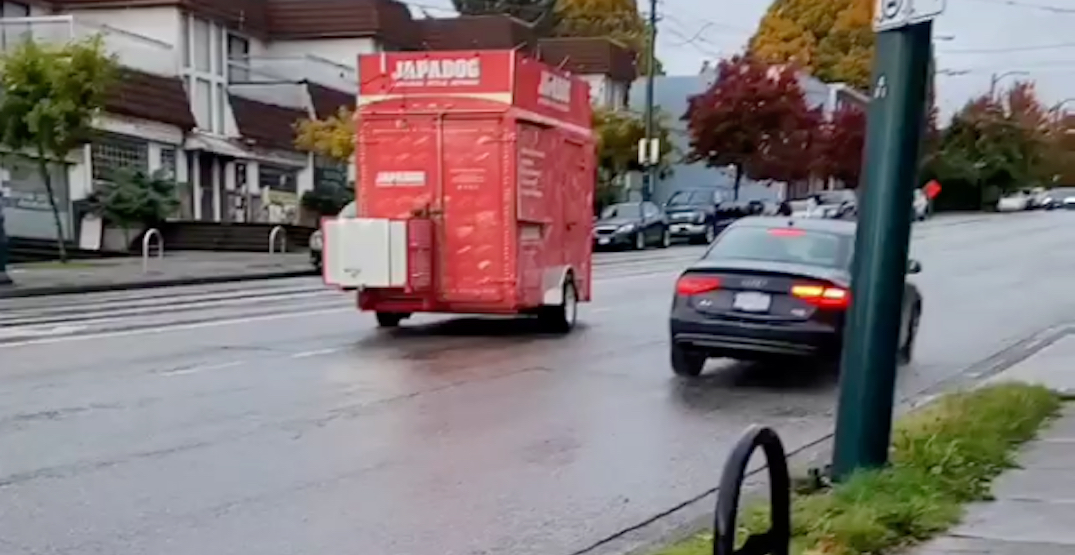 A popular Vancouver hotdog cart is the star of a viral video after it was spotted on the run.

In the afternoon on Wednesday, October 20, one of Japadog’s trailers rolled away and hit a pole near a busy South Vancouver intersection.

Japadog’s Daijiro Inoue told Daily Hive that the trailer got disconnected from their truck and rolled down Main Street “due to the pre-trip inspection failure, which has not happened before.”

“We have immediately worked on our safety and pre-trip inspection policies, to prevent any similar future incidents,” said Inoue.

Despite this being a busy, traffic-heavy intersection, “no person or vehicles got harmed,” Inoue said.

The video shows the red Japadog trailer rolling down Main Street near the intersection of Main and Marine Drive.

As it approaches the intersection, it turns and collides into a pole. A vehicle is seen driving right past it on its way down the hill.

Luckily, no one was injured and the trailer managed to hit the pole rather than roll into the busy intersection. Japadog has already begun work to improve its safety policies.

“It is our sincere apology for all those who are concerned, and thank you for your understanding and patience,” said Japadog.