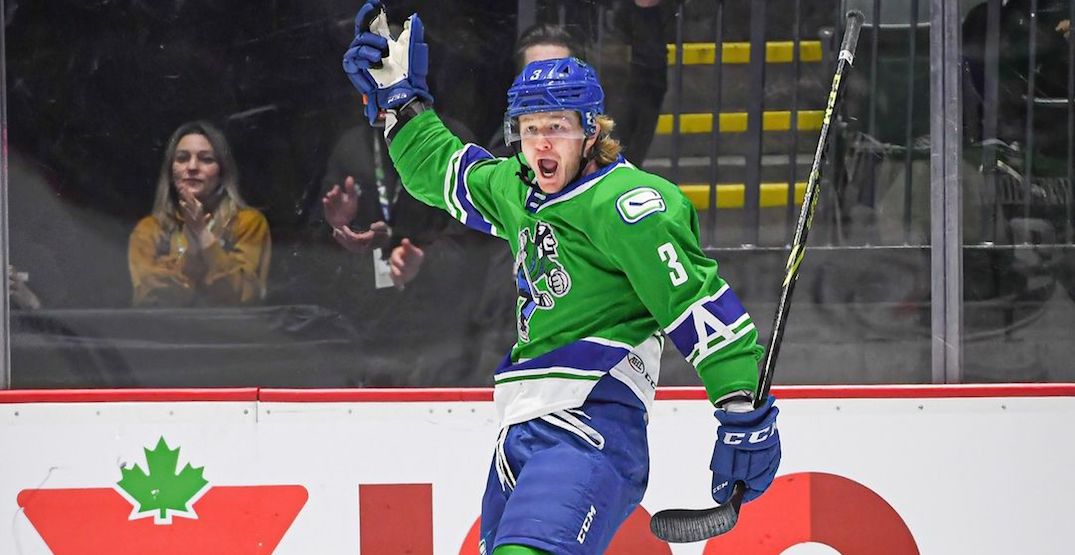 It was one year ago tomorrow that Jack Rathbone realized a lifelong dream.

Except, it wasn’t at all how he imagined it.

Stepping onto the ice at Rogers Arena on May 4, 2021, Rathbone played his first NHL game without a single Canucks fan in attendance. He played just 16 professional games last season, split between Vancouver and Utica. The rest of his first pro season was mostly spent waiting to play, whether it was on the Canucks’ taxi squad, or in quarantine every time he crossed the border.

While Rathbone admitted that he learned a lot and that playing in the NHL under any condition was special, needless to say, something was missing.

“I think the hardest part was that was nowhere near the NHL experience,” Rathbone said in an interview with Daily Hive. “Definitely different than anything pro hockey has seen before.”

Coming into this season Rathbone was looking forward to the full experience.

“This year was just a breath of fresh air, being able to experience a lot more than what we were allowed to last year.”

The 22-year-old blueliner made the Canucks out of training camp and was in the opening night lineup. But his stint in Vancouver was short-lived.

Less than a month into the season, Rathbone was sent down to Abbotsford. He was called up for one more game on November 11, but despite the close proximity of Vancouver’s new AHL franchise, he never got into another NHL game the rest of the season.

Perhaps it was a blessing in disguise for a player that hasn’t played a lot of hockey in recent years. Rathbone wants to have a long NHL career, but playing big minutes on a consistent basis in the AHL is probably good for his development.

“Your goal is obviously to play at the highest level possible, but I’ve learned a ton. Definitely, I’ve found some growth in the consistency of playing every night and playing some meaningful minutes, and playing for a good coaching staff.”

The goal that punched our ticket to the playoffs ✅

Rathbone was an offensive dynamo for the Abbotsford Canucks this season, scoring 40 points (10-30-40) in 39 games. That put him tied for 10th in points by AHL defencemen this season, and second in points per game (minimum 30 games) among AHL blueliners.

Rathbone ranked third in rookie points, regardless of position, for players that appeared in at least 30 games.

Those numbers earned Rathbone a spot on the AHL All-Rookie Team, but Rathbone isn’t in the AHL to improve his offence.

Rathbone said he hasn’t talked to the new Canucks management team much, which is understandable given he was already in the minors when changes were made. He has spoken a lot with Ryan Johnson, the Canucks’ senior director of player development and Abbotsford’s GM.

“The talk with me and being down here is trying to round out my 200-foot game and I think I’ve taken some big strides towards that on both sides of the puck… It’s been fun. Definitely a fun year and hopefully keep rolling in the playoffs.”

Abbotsford is set to begin the Calder Cup Playoffs in Bakersfield tonight, with a best-of-three against the Edmonton Oilers’ affiliate. The team is being bolstered by a number of players returning to Abbotsford from Vancouver, including Spencer Martin, Nic Petan, Sheldon Dries, and Will Lockwood. Vasily Podkolzin has also joined the team, despite not having played a single game in the AHL this season.

But on defence, Rathbone is still expected to play a leading role.

“They’ve kind of been good about just letting me do my thing down here. Hopefully, I’m putting my best foot forward to hopefully make that transition a little bit easier.”

Rathbone said he’s close with Lockwood and John Stevens, an AHL veteran who is his roommate on the road.

But in terms of leadership, Justin Dowling is a player he looks up to.

“We’ve got a really good leadership group. A guy like Justin Dowling being down here, he’s a guy that’s a pretty vocal guy, and when he speaks up, you listen.”

Rathbone was merely a fourth-round draft choice by the Canucks in 2017, yet he drew the attention of one of the top insiders in hockey on draft day.

Elliotte Friedman took time to speak with Rathbone one-on-one at the 2017 draft in Chicago, but it had very little to do with hockey.

It had a lot more to do with Rathbone off the ice. The Massachusetts native opted to play high school hockey close to home for an additional year after he was drafted so that he could spend more time with his younger brother Teddy, who was eight years old at the time and had autism.

“It was really nice of [Elliotte] to do. I’ve met him a few times now and had a couple conversations with him. We were talking more so about stuff away from the rink, with my brother being diagnosed with autism, and being on the spectrum — how he’s been affected by it as well within his family. That day I probably didn’t realize the magnitude of just how big of a name he is in the hockey world. Definitely, something I didn’t take for granted, and definitely a really good guy.”

Thanks for the support @FriedgeHNIC, we always had a feeling we were your favourite! pic.twitter.com/oV9PSG55i5

Teddy is 13 years old now and is still very tight with his big brother.

Teddy hasn’t been able to get out to watch Jack play with Abbotsford yet, but he’s hoping to get to playoff game.

Rathbone and the Canucks are hoping that Teddy gets the opportunity to see many of them this spring.