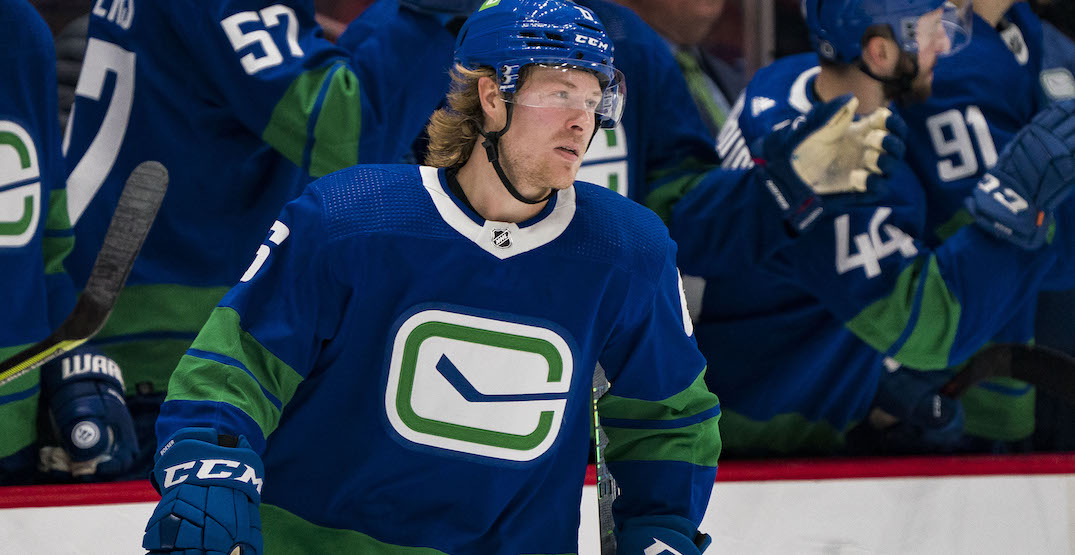 While Elias Pettersson stole most of the headlines this season for his first-half struggles, by the end of the year, no core player on the Vancouver Canucks had a more disappointing season than Brock Boeser.

One year removed from leading the Canucks in goals and points, Boeser finished sixth on the team in scoring with 46 points and fourth in goals (23). A lot of players would be happy with those numbers, but for a goal-scorer like Boeser at this stage of his career, more was expected.

Boeser, 25, knows he can be better and expects more out of himself. But he also revealed on Sunday that he’s going through a tough time personally, due to the health of his father Duke.

In a CHEK television interview with Don Taylor and Rick Dhaliwal on Monday, Boeser’s agent Ben Hankinson said that while the question about his dad caught him off-guard, he thought it was good for him to “just let it out.”

“I think Brock was a little rattled, even after, thinking that he screwed up, and was embarrassed,” Hankinson said on Donnie and Dhali. “But in today’s day and age… it’s just good for him to emotionally go through that and let people see what the average person deals with. Just cause he’s a great hockey player doesn’t make it any different.”

“Over the course of the year I would tell Brock that if he needs time away, if he has to go home, let me know, and we’ll make it happen,” Bruce Boudreau told reporters this morning. “If you have a core covenant on your team, the first thing is always family first. I firmly believe in that.”

Seeing Boeser in tears struck a nerve with Canucks fans on Sunday. Everyone was heartbroken for him, while some fans on social media took aim at Postmedia’s Ben Kuzma for asking the question in the first place.

Hankinson provided insight into what he and his client thought about the line of questioning.

Back to the business of hockey, it will be very interesting to see what changes the new Canucks management team makes this summer. Boeser is a pending restricted free agent, and is due a $7.5 million qualifying offer.

That’s a hefty price tag given Boeser’s level of production in 2021-22. Perhaps that gives the Canucks an incentive to trade him, but it also hurts his market value in a potential deal.

Is there a long term contract to be signed between Boeser and the Canucks that satisfies both sides? Or will the Canucks simply opt to buck up on a short term deal?

“We’ve got some work to do,” Hankinson said regarding contract negotiations. “I talked to them during the year — Patrik [Allvin], and Jimmy [Rutherford] before Patrik got there. I have a good relationship with both those guys. Hopefully we’ll figure something out. Obviously they have to look at every other player and where they fit in the cap.”

Only 14 wingers in the NHL this season had a cap hit over $7.5 million. Teammate Conor Garland produced more points than Boeser with fewer opportunities, and makes just $4.95 million.

“It’ll be a little bit of a battle to figure it all out, but the plan is to get Brock back there next year, and many more years to come.”

Hankinson said Boeser loves playing in Vancouver, and isn’t turned off by the pressure of playing in Canada.

“Goal scorers, in particular, get measured on your numbers, and that’s the way it should be. You’re on stage and the fans pay a lot of money to watch games and are loyal, especially in a Canadian market, it’s fabulous. Brock has never ducked that… He loves it. He loves it in Vancouver.”

It’s clear from the response from fans on Sunday that Vancouver loves Boeser back.