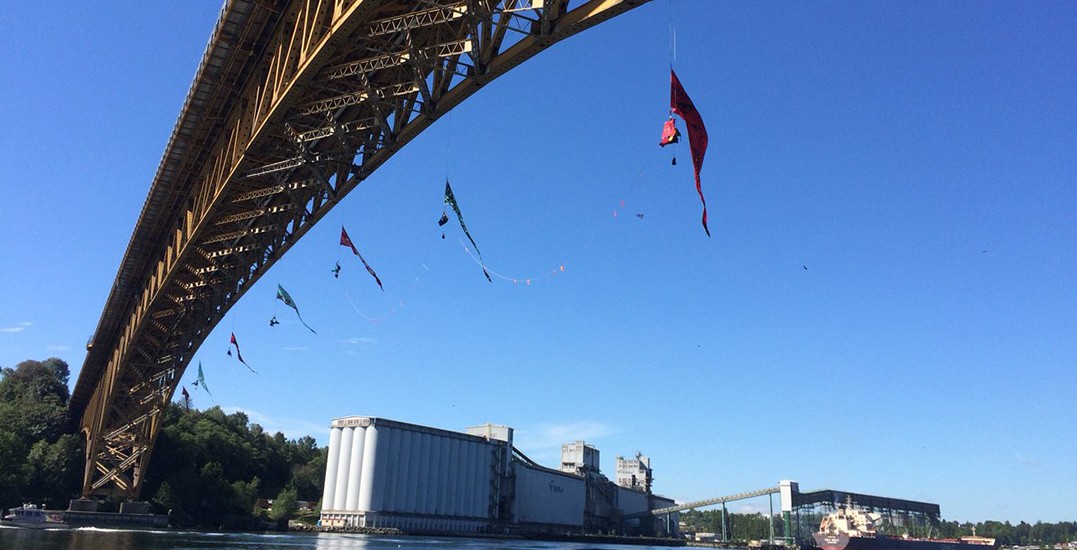 After a lengthy extraction process by the North Vancouver RCMP, police have confirmed that 12 protesters who recently staged a demonstration off a bridge will be facing criminal charges.

The 36-hour protest began on the morning of Tuesday, July 3, when seven people formed an “aerial blockade” off the side of the Ironworkers Memorial Bridge to prevent an oil tanker from leaving the Trans Mountain Terminal in Burnaby.

Another group of five were on the catwalk of the bridge, in protest.

According to North Vancouver RCMP‘s Richard De Jong, the extraction process began between 2:30 and 3 pm. An emergency response team was armed with an aerial extraction unit – members of the RCMP who are trained for this very scenario (repelling off buildings or structures).

De Jong explains that the aerial extraction unit was lowered off the bridge and engaged in conversation with the hanging protesters. Shortly after, they were lowered into a police boat that was waiting underneath.

They have since been charged with mischief, as well as charges for violating section 121 of the Canada Shipping Act: the act of impeding the safe movement of a vessel.  The violation carries a maximum penalty of 18 months in prison and a fine of $1 million.

RCMP explain that they have since been released with the promise to appear in court at a later date. Also, they will not be allowed to go near the Ironworkers Memorial Bridge unless strictly passing through it.