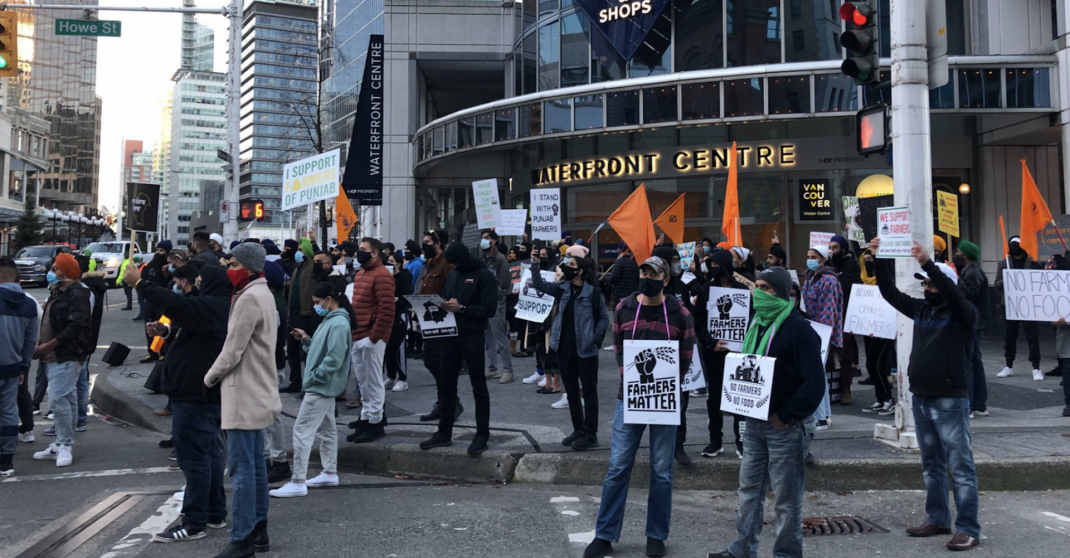 The Indian government has reportedly revoked permanent residency status and work visas of some people living in Canada who participated in farmers’ protests.

India-based Zee News first reported the development this week, citing anonymous high-ranking sources within the Indian government. The Tribune, another Indian outlet, reported on Wednesday that at least 12 protesters had been identified and that Canada was one country where Indian officials are keeping a close eye.

Daily Hive has reached out to India’s Ministry of External Affairs and the Consulate General of India in Vancouver, but neither has responded.

The government is apparently revoking Overseas Citizenship of India (OCI) status for some people who protested in Canada. India doesn’t recognize dual citizenship, but grants OCI status as a form of permanent residency to people who accept citizenship elsewhere. OCI status enables holders to live and work in India indefinitely.

Protests in solidarity with Indian farmers, primarily in the provinces of Punjab and Haryana, took over Vancouver and Toronto earlier this year. People demonstrated in-person and organized physically distanced motorcades through the cities’ downtown cores.

The unrest is over several new farming laws passed by the Indian government that farmers say will make earning their livelihoods more difficult.

Vancouver-based Mandip Kharod has been participating in farmers’ protests here because she believes human rights, food security, and right to a livelihood should be important for everyone.

“I don’t think you can call yourself world’s largest democracy when you continue to have subjective rules and ideas of what you can do, and pressure people into agreeing with you,” she told Daily Hive.

Although she doesn’t know anyone personally who’s been contacted by the Indian government about having their OCI status revoked, the said it’s a serious consequence for people who have done nothing but exercise their democratic right to protest.

“Think of how many international students come here to gain an education. They still have very close ties and connections to their homeland. To say they … got involved anti-India activities … and they’ll be barred from ever going back to their homeland? That should be baffling to every citizen everywhere.”

India has revoked OCI status for people who spoke out against the government before. In 2019 it cancelled American journalist Aatish Taseer‘s OCI card after he published a Time Magazine article that was critical of Prime Minister Narendra Modi.

The Ministry of External Affairs, however, denied the cancellation was politically-motivated and said it was because Taseer’s estranged father was Pakistani. India does not grant OCI status to people whose parents, grandparents, or great-grandparents are Pakistani.

India also revoked OCI cards for relatives of the parents who were convicted of killing their three-year-old daughter Sherin Mathews.