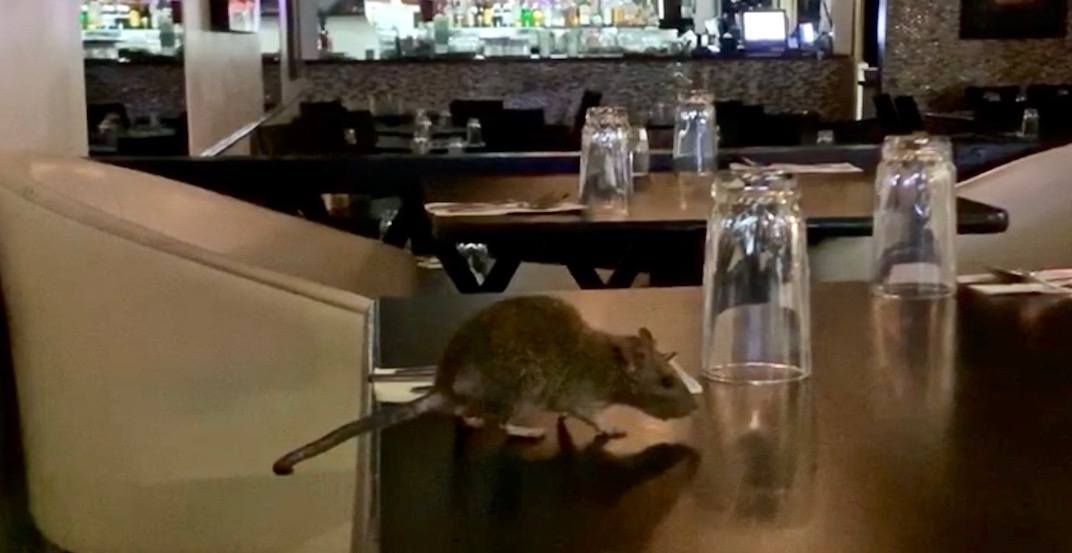 A downtown Vancouver restaurant says it’s ramping up pest control efforts in the wake of a video showing a rat in their eatery after hours.

In a video submitted to Daily Hive by a reader who wishes to remain anonymous, it looks to show a sizable rodent on the table, running across the surface and then disappearing below after a few moments.

It was February 10 around 11:48 pm in front of India Gate Restaurant on Robson Street, according to the reader.

India Gate Restaurant, located at 616 Robson Street, has been a fixture in the bustling Vancouver core for over 40 years.

In response to the video, India Gate told Daily Hive they go “far above to ensure our restaurant is pest-free as we care about our customers.”

India Gate said they would be having their pest control team coming in for an inspection after viewing the video, and assured us that they were taking it very seriously.

The eatery said Orkin Canada is currently handling the situation.

According to Vancouver Coastal Health records in recent years, the restaurant has previously been flagged for critical infractions including signs of rodent activity, most notably on October 2 and October 11, 2018, when the restaurant was deemed not in compliance with the following critical questions by health authorities:

However, the most recent inspection on record for India Gate was a routine follow-up that took place on November 27, 2018, when the premise was marked free of pests.

Earlier this month, a development application was submitted to redevelop the site at 600 Robson Street (the northwest corner of the intersection of Seymour Street and Robson Street), the block where India Gate currently operates, into a 13-storey office building.

The small 12,000-sq-ft lot is right next to the Capital Residences tower and is currently occupied by a 1914-built single-storey retail building with tenants such as a picture frame store, Red Burrito, Simon’s Bike Shop, Vancity Weed, Thai Cuisine Restaurant, and India Gate.

If the application is approved, all of these businesses will be forced to relocate.