It’s no secret that Canada’s tech industry is booming now more than ever.

And when Amazon announced it would be looking for a city to build its new headquarters, Canadian cities jumped at the opportunity. From Toronto to Vancouver, bids will be presented to the major tech company in hopes of Canada becoming home for HQ2.

With the influx of successful startups, this is an achievable goal for Canada. And now, American tech talent are noticing the expanding industry north of their border.

According to new research from Indeed economist Daniel Culbertson, when US job seekers search in a foreign market, about 12% of their clicks are to Canadian jobs. In fact, Canadian postings account for almost 30% of all US job seeker’s clicks on tech postings outside the US in the six months ending May 2017, which is up from 23% in the same period the previous year. 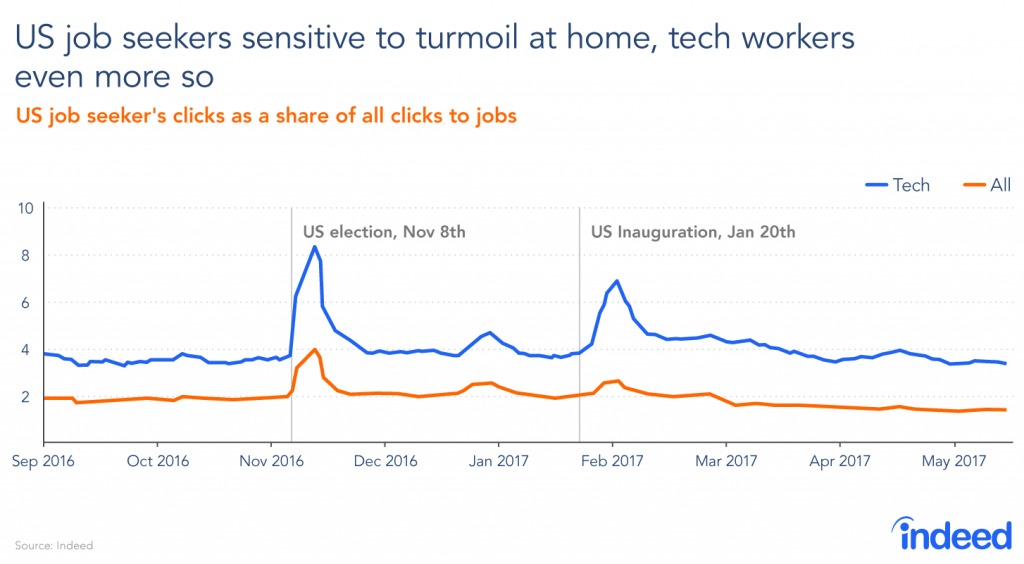 In his report, Culbertson also showed the trends lines showing spikes in searches during the US election in November 206, and again during Inauguration day earlier this year.

“Many commentators chalked up this initial reaction to momentary panic. Nevertheless, a few months to think it over didn’t alleviate many concerns,” he said in the report. “The greater size of the tech spikes compared with the spikes for all workers shows how strong the reaction of tech talent to the current administration has been.”

As for where the US job seekers are looking, Toronto seems to be the most appealing city, accounting for 46% of clicks on Canadian tech jobs. Vancouver comes in a distant second at 15% and Montreal is third at 7%.

When looking for Canadian jobs, US workers are searching for software engineer, java developer, and development operations engineer positions the most. The report indicates that the Canadian market is attracting seasoned workers who are looking for senior positions.

But despite the stats, how Canada capitalizes on the interest from US tech workers remains to be seen, according to Culbertson.

“Regardless, Canada’s tech industry is poised to expand in coming years,” he said. “An influx of talent or investments from major tech companies like Amazon would simply be more wind in the sails for an industry already on the right course.”