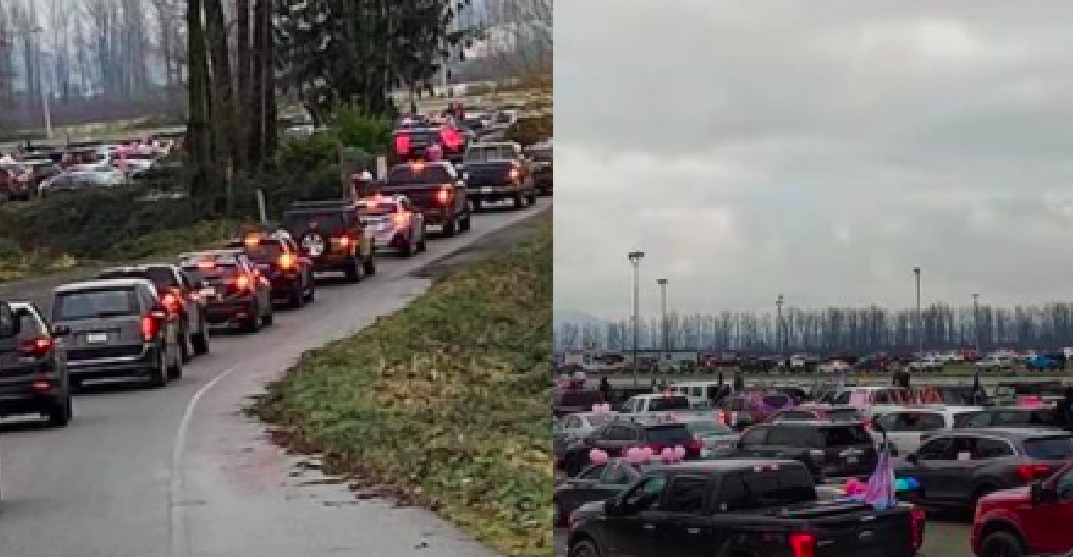 After a transgender teen was violently assaulted on the grounds of a school in Mission last week, hundreds came out to participate in an anti-bullying car rally this weekend in support of the teen.

A post shared by What’s On! Mission Magazine (@whatsonmission)

At a car rally today in Mission BC to show support for a trans sister who was harassed at school. Amazing turn out! Such a happy crowd. pic.twitter.com/w3afr87jwn

Today I went out to Mission, BC. We did a driveby parade in support of a 13 year old trans teen who was physically attacked at school. I got so emotional seeing the community come together. https://t.co/ZLegwRDjFy#TransIsBeautiful #MissionBC pic.twitter.com/zlHr23SUqf

Last week a video emerged of a transgender teen being bullied and beaten by two other teens in #MissionBC. Today the whole community came out and took part in a car rally to support the teen! 💪#BetterTogether #stopbullying pic.twitter.com/E5sS2eVxso

Two teenage girls were arrested following the incident, and now police said they would be recommending charges against the pair.

According to Mission RCMP Cpl. Jason Raaflaub, police first became aware of the incident at Ecole Heritage Park Middle School after the 14-year-old victim and her parent came to the detachment this past Monday to report what had happened.

“Investigators began an investigation based on the information that was provided, inclusive of a social media video clip,” Raaflaub told Daily Hive. “As a result of this investigation, two young females, approximately 14-years-old as well, were arrested without incident.”

Raaflaub said the pair was subsequently released with pending court appearances in the Abbotsford Court House for late March 2021.

“The Mission RCMP are recommending criminal charges of Assault for one of the females and Assault along with Uttering Threats for the other,” he said.

In a statement, Mission School Board Chair Tracy Loffler said the board is “appalled by the assault of a student at the school” and is taking the incident “very seriously.”

The district “does not tolerate bullying, harassment, or violence,” and students have a right to attend school in “a safe and inclusive manner,” she said.

In light of this incident, Loffler said the board is reviewing its policies and procedures “to ensure we have a safe, equitable, and inclusive education system for all students.”