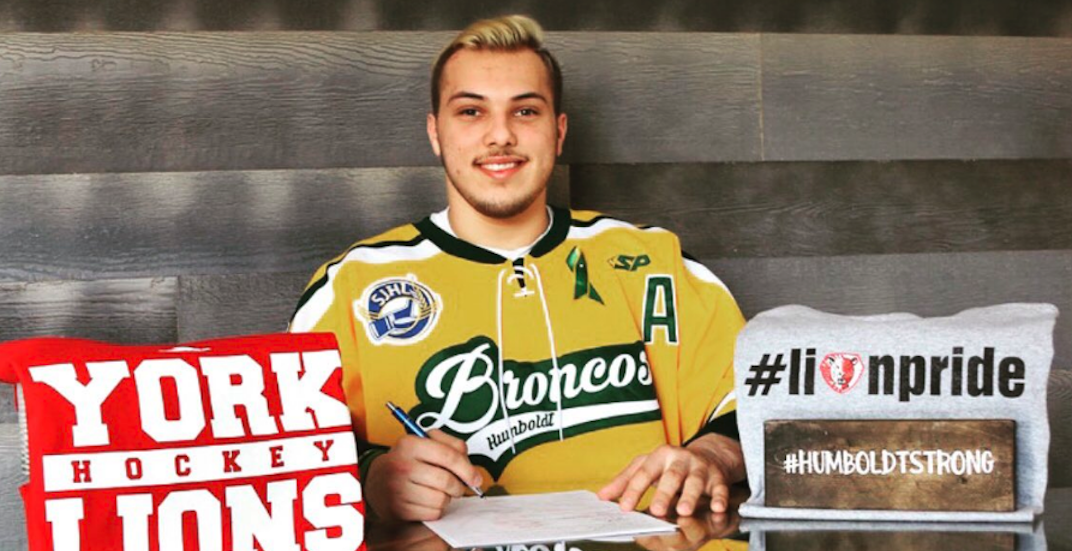 Despite a skull fracture, a puncture wound in his head, a brain injury, and multiple fractured vertebrae in his neck and back, Kaleb Dahlgren will continue his hockey dream.

A right winger for the Humboldt Broncos, the 20-year-old was on the bus that crashed on April 6, killing 16 people.

Dahlgren is out of hospital and eager to continue his hockey career, signing with the Toronto-based York University Lions hockey team on Friday.

“This morning I am honoured and humbled to have committed to York University and their U Sports (CIS) Lions hockey team,” Dahlgren posted in a message on his personal Twitter account. “I have dreamed about and worked hard for this since I was 9 years old.”

Though the Saskatoon native is back stickhandling in his parents’ driveway, he still has more recovering to do.

Bronco Kaleb Dahlgren getting back to his game #humboldtstrong pic.twitter.com/JNN9GmC3c5

“My goal is to attend York in the fall of this year, however the school has assured me I can begin whenever my body is ready.”

🏒 Congratulations Kaleb! We are excited to see you on campus in the fall and sporting the @YorkULions @YULionsMHockey red & white! #LionPride https://t.co/jKqHcO4BZP

Dahlgren is playing for more than himself now.

“I would like to thank my family, friends, teammates, coaches, trainers, and the many others who have helped me, throughout my life, to achieve my goal,” he said.

“Reaching this goal has always driven me on and off the ice, however it has taken on a new importance since April 6, 2018: to play hard and live life for my fellow teammates, for my coaches, including Mark Cross, who played hockey for York for 5 years… for everyone who lost their lives that day, and for all those whose lives have been forever changed by the Broncos tragedy.

I will honour their legacy in all I do as I carve my own path forward at York, on the ice and off, doing my best to always remain #humboldtstrong”