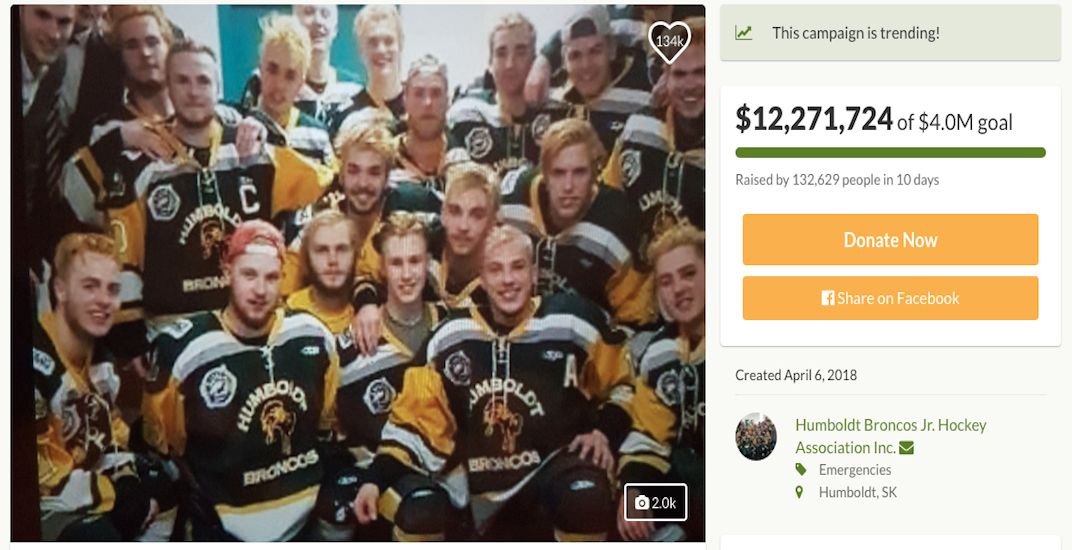 The GoFundMe page set up to raise funds to support players and families affected by the tragic Humboldt Broncos bus crash will soon be closing.

Since launching 10 days ago, the GoFundMe page has received over $12 million dollars in donations, making it the second largest GoFundMe campaign to take place on the fundraising website globally, following Time’s Up Legal Defense Fund, which has raised $21.6 million.

More than 132,000 individuals and businesses from all corners of the world and the hockey community have donated between $20 and $50,000 to the campaign, which was started by Humboldt resident Sylvie Kellington

The funds have been steadily pouring in following a now-infamous incident when a bus carrying players and coaching staff from the Saskatchewan Humboldt Broncos junior hockey team was hit by a semi-trailer on Friday, April 6.

According to an update on the GoFundMe page, the page will only continue accepting donations until Wednesday, April 18th at 11:59 pm MDT.

The donated funds will then be transferred to a newly created non-profit known as the “Humboldt Broncos Memorial Fund Inc.”

An advisory committee is being established to make a recommendation for the allocation of funds.

The Broncos plan to provide an update when they’ve “formalized the composition of this committee.”

Once the GoFundMe page goes offline, people who still want to help can make a direct donation to the Humboldt Broncos here.