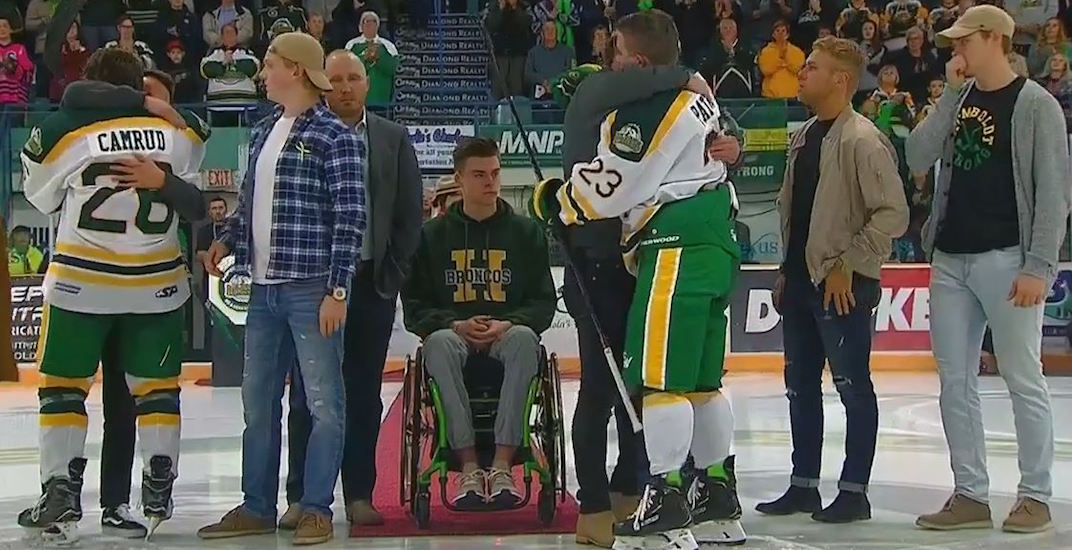 It was a night unlike any other that Humboldt has seen.

Check that, it was a night unlike any other in hockey history.

The Humboldt Broncos and Nipawin Hawks, two teams in the Saskatchewan Junior Hockey League, played in front of a live national television audience on Wednesday night. Canada watched as the Broncos took to the ice for the first time since the tragic April bus crash that shook the country.

Tears flowed on the ice and in the stands, as a moment of silence was observed pre-game. Seeing one of the survivors drop to his knees with emotion, it was hard not to tear up watching at home.

A moment of silence was held before the start of tonight's season opener. #HumboldtStrong pic.twitter.com/h0mwmAxCuV

Derek Patter and Brayden Camrud – the only two returnees to the Broncos this season – took the ceremonial faceoff at centre ice, with nine survivors joining together to drop the puck.

Derek Patter and Brayden Camrud were joined by Tyler Smith and their @HumboldtBroncos teammates for the ceremonial faceoff.

Those same two players received an incredible standing ovation during the player introductions, too.

Essentially a brand new team, Humboldt had their hands full with the defending SJHL champions. Though they lost the game 2-1, they played very well.

While killing a penalty, Patter and Camrud nearly connected for a highlight reel goal that would have tied the game in the third period. That would have been something.

TSN, who broadcasted the game, did so with four hours of commercial-free programming.

Following the game, banners were unveiled for every member of last year’s team.

Some of the banners. The 16 dead were unveiled first. Now they’re going through survivors. #HumboldtBroncos pic.twitter.com/TZRJyV741l

It was an incredible display by Humboldt, who hit on all the right notes during the pre- and post-game ceremonies.

The town is still in mourning, and likely will be for some time yet, but hopefully the Broncos can help with the healing process.