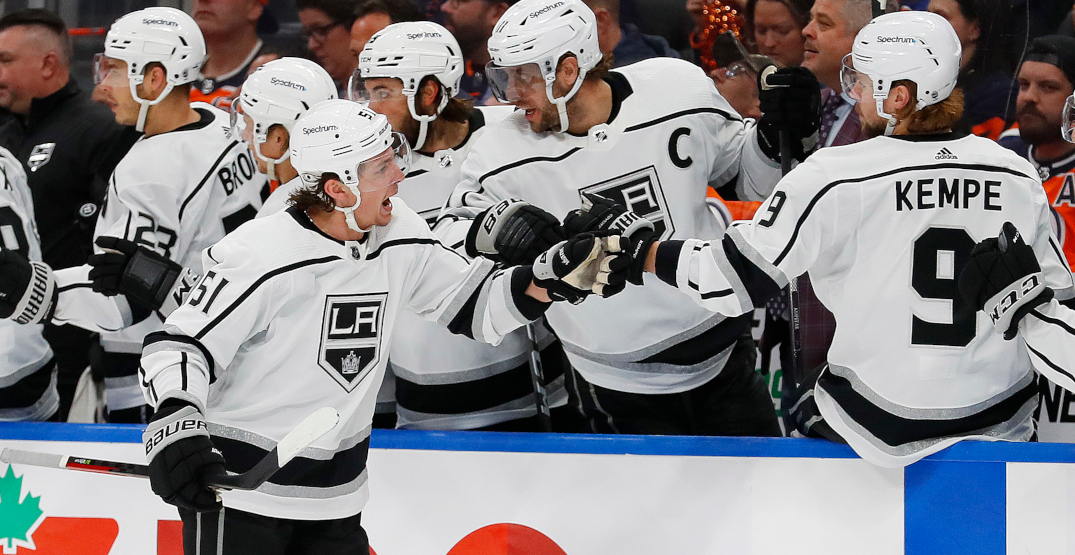 It hasn’t exactly been smooth sailing for Troy Stecher since leaving Vancouver two years ago.

Signed to an affordable two-year deal worth $1.7 million per season by the Detroit Red Wings in free agency in 2020, Stecher scored 11 points in 44 games last season.

This season, the former Canucks defenceman suffered a wrist injury in early November and didn’t return to the Red Wings’ lineup until February 12. Just over a month later, he was traded for the first time in his career, to Los Angeles, where he reunited with former defence partner Alex Edler.

The Kings got him for just a seventh-round draft pick.

The 28-year-old Richmond native didn’t have a particularly flattering stat line to end the season, scoring just three points in 29 games. And when the Kings began their playoff series against the Edmonton Oilers, Stecher found himself as a healthy scratch.

After LA lost two games in a row, Kings coach Todd McLellan decided to reinsert Stecher into the lineup, and it was a good decision. Don’t bet on him sitting again anytime soon.

Stecher has been an unlikely hero for the Kings, scoring two goals and four points to surpass his regular-season numbers in just two playoff games. Suddenly, Stecher is just one point back of the Kings playoff scoring lead and into the top 10 in NHL scoring by defencemen.

Troy Stecher is a different level of fired up after that one. 🔥#StanleyCup | #GKG pic.twitter.com/Jn5RpYXtFF

Stecher’s known more for his defence than his offence, but if he keeps this up he may get a reputation as a playoff performer. In 19 career playoff games with LA and Vancouver, Stecher has four goals and seven points.

The 5-foot-10 blueliner hasn’t been on for a goal-against yet in this series and even assisted on the Kings’ game-winning goal in overtime. That includes 3:25 of shorthanded ice time against the Oilers’ high-octane power play.

If there was any doubt that #Canucks fans still have love for Stecher pic.twitter.com/1AyKiWdBzW

Canucks fans certainly noticed this, with so many people tweeting about “Troy from Richmond” after Stecher’s goal, that Richmond was the top trending topic on Twitter in Vancouver at one point last night.

Here’s a look at some of last night’s reactions from fans, who are probably hoping the Canucks bring Stecher back to Vancouver next season. He’s a pending unrestricted free agent, after all.

YOU CAN'T STOP TROY FROM RICHMOND, YOU CAN ONLY HOPE TO CONTAIN HIM

After sitting the first 3 games of the playoffs Troy from Richmond has goals in b2b games!

Obsessed with Troy from Richmond

Man #TroyFromRichmond. Benning has made a fair few mistakes, but letting that man go? Pretty high on the list. If he was still the GM, he probably would have traded our 15 pick to get him back 🙄 #Canucks

Too late to bring Troy from Richmond back? 🥲 pic.twitter.com/F0JLstTxr5