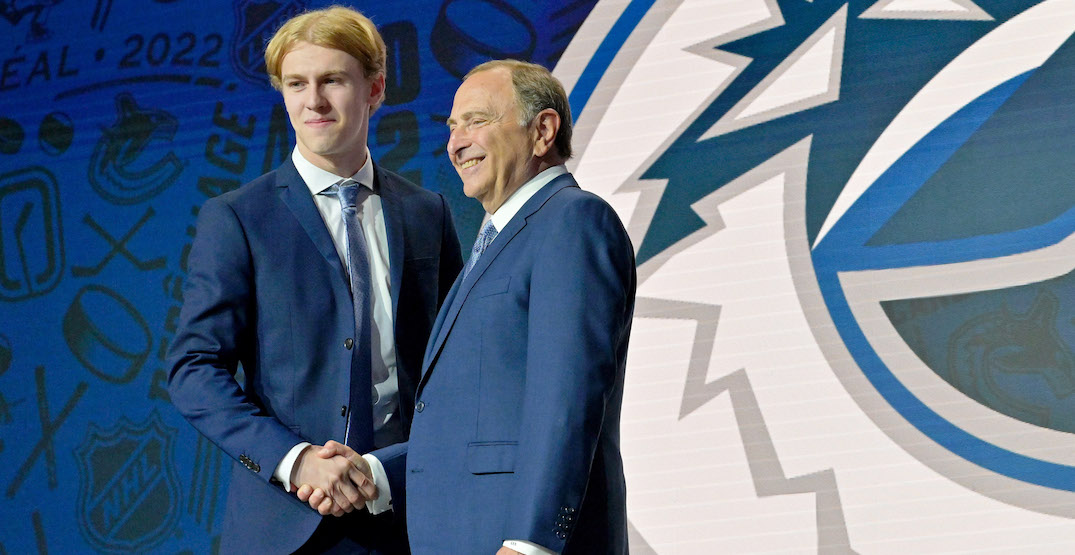 The Vancouver Canucks have a new top prospect, and his name is Jonathan Lekkerimäki.

Lauded as a high-upside pick by hockey analysts, Lekkerimäki’s separating tools and projection as a scorer at the NHL level created a fair bit of excitement; especially when considering the value of the 15th overall draft spot.

Much of scouting a player properly is examining what the player will be in the future, rather than what they are now. This concept, while basic, requires evaluators to think critically and assess how said player’s makeup will fare with further physical, mental, and tool development.

The 2004-born forward is a prime example of a team betting on development.

While most wouldn’t expect a significant amount of success if you dropped a slight 17-year-old into a professional hockey league, Lekkerimäki blew expectations out of the water this past season.

He proved his 20 goals in 26 game effort at J20 Nationell (Under-20 junior league) had some translation to the pinnacle of Swedish hockey, the SHL. Prorated across an entire season, Lekkerimäki scored at a 14-goal pace. 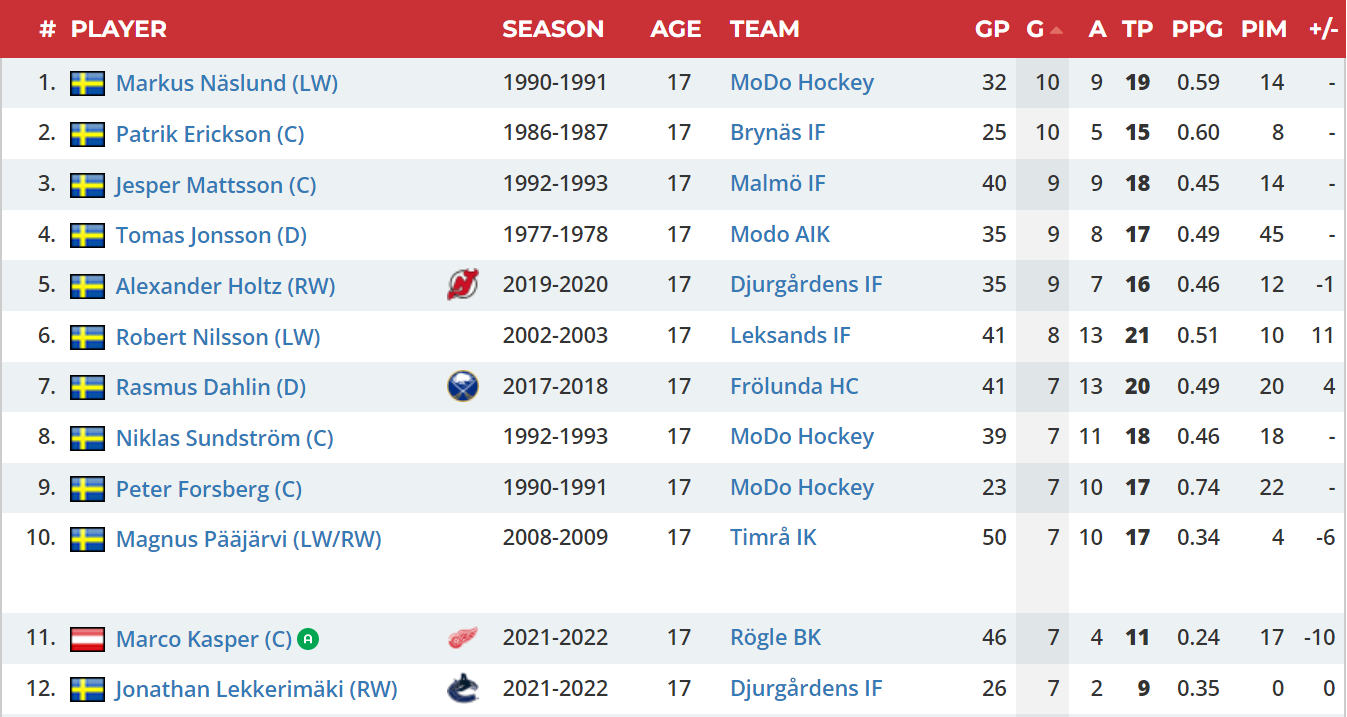 While Lekkerimäki looked uncomfortable in the SHL, there’s enough evidence across junior, pro, and international tournaments that there is a sizeable amount of potential in the Djurgårdens right-winger — obviously starting with his ability to put the puck in the net.

Superbly dangerous one-on-one, Lekkerimäki executes weight-shift carry-in attempts, typically through the slot, that are focused around attacking the back of defenders, absolutely punishing overreactions.

As Lekkerimäki breaks free, he leverages his handling to freeze goaltenders on their blocker side, disguising the puck on the backhand, only to release his shot in-tight, and following through with pin-point accuracy.

He even can separate with his skating ability, while considered as a weakness of his game by some, he should see growth with more core and leg strength, even to ‌where he might be above average by the time he establishes himself in the NHL.

Why is Lekkerimäki lauded as an NHL-quality Shooter?

Beyond his individual ability on the rush, Lekkerimäki built a reputation this season, rifling wrist shots and one-timers from a distance in sustained pressure scenarios, like the power play.

Lekkerimäki possesses one of the best shots in the draft mechanically. He flares his left-elbow out, allowing his upper body to create down force to exploit the flex of his stick.

He transfers his weight effectively, even on one leg to add power, and he has a lightning-fast release, as his wrist folds over. The same principles apply to his one-time shot, a weapon he used generously this season.

Habits such as using defenders as screens, handling to find clean shooting lanes, and the patience to wait for breakdowns only help this ability.

The second element of Lekkerimäki’s scoring ability is his off-puck movement. A hallmark of good scorers at the NHL-level is the ability to support the pass, get open, and set for a shot.

Across all levels this past season, Lekkerimäki accomplished this. He rotates with the puck carrier, slips into softer coverages, and processes steps ahead of the play so he can leverage the aforementioned shooting ability.

The area where Lekkerimäki will have to improve is his on-puck decision-making. Too perimeter at times, Lekkerimäki needs to work off the walls and into the middle of the ice at a higher rate. He lacks planning, often working low-to-high to lap the offensive zone, succumbing to pressure.

There were positive signs this season that he has the ability — it will all be about habit forming from now on to further expand his scoring.

Is a shot the only tool he’s got?

While Lekkerimäki’s shooting ability steals the limelight, and he can be selfish in his use of that separating tool, the U18 World Junior Champion has a passing dimension to his game.

One-touch cross-ice passes, flipping out of faked shots, and quick identification of open teammates highlight throughout his tape.

In transition, he can layer the puck with saucer passes and work give-and-gos. He actively tries to drag attention while executing a pass, providing teammates with more room to operate.

The element of his passing game that is most exciting is his delay game. Lekkerimäki will often execute cut-backs and stop-ups to feed trailing teammates or set up pressure — he is remarkably good at keeping possession and not turning over pucks on the walls. A delay game at a young age usually indicates scoring translatability.

“Be more competitive and work in front of the net”

Lekkerimäki’s greatest hurdle will be translating his game against stronger and better defenders. While distance shot attempts, transitional breaks, and power plays exist in the NHL, he will have to become better along the boards and in the front of the net — exactly what the new Canuck stated he wanted to improve upon in a post-draft interview.

At the junior level, the Swede showed some forechecking and occupation of heavier trafficked areas ‌to turn possession. These sequences were few and far between, however. He often relied on teammates to push pressure so he could set his shot. In the SHL, he was even more timid, struggling to initiate and compete against professionals on the walls and behind the net.

Lekkerimäki has some ability to manipulate and shake off defenders with the use of his edges, and can process the subsequent play well. With more physical growth, it wouldn’t be shocking if we saw more redirection and rebound scoring in the coming seasons.

With a return to Sweden, Lekkerimäki won’t be in the SHL, rather the second-highest league, HockeyAllsvenskan. This is due to the relegation of his club, Djurgårdens, in 2021-22. This is a perfect situation to push high minutes and exploit slightly worse defenders, while also playing against professionals. He will also be part of the U20 Swedish World Junior team this August.

While areas of Lekkerimäki’s game need obvious work and some may feel his game lacks enough details to translate — separating tools rule in the NHL, especially ones that equal goals. With an invigorated development team in place in Vancouver, bolstered by two hard-skill hall-of-famers in Daniel and Henrik Sedin, the path is there for Lekkerimäki to become the best version of himself, and maybe one day, a top-six option who excels on the first power play unit.