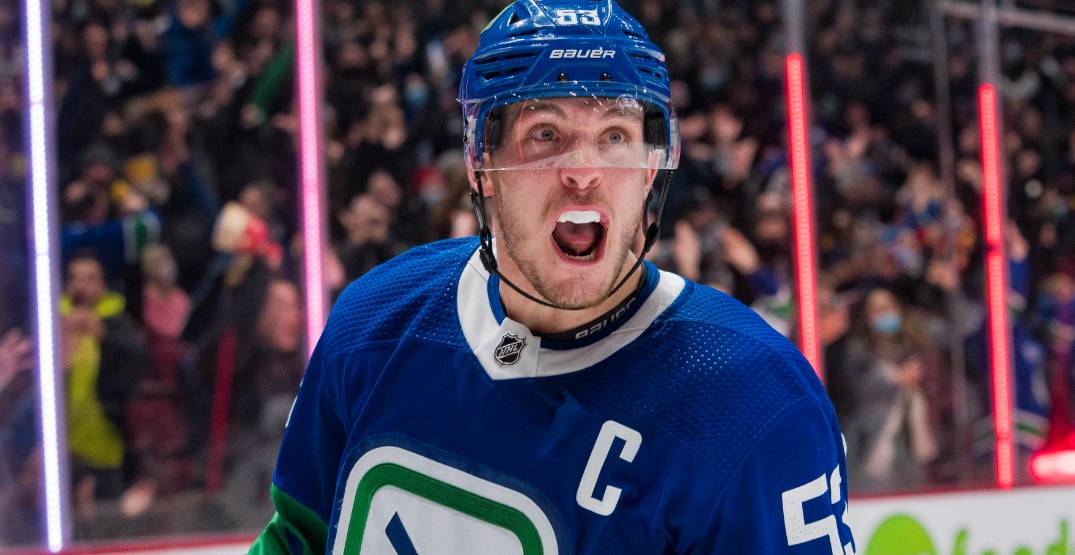 Time to back up the Brink’s truck.

Or, is it simply time for a modest raise?

Lost in the hoopla of NHL free agency and J.T. Miller trade rumours is that Vancouver Canucks captain Bo Horvat is eligible for a contract extension.

With the Canucks already squeezed up against the salary cap, how much could a potential Horvat extension cost them?

Here’s a look at seven comparables to get a sense of what Horvat’s market value is, and what a team-friendly extension might look like.

Both Vincent Trocheck and Horvat are high-end second-line centres in the NHL. Over the past three years however, Trocheck has outproduced Horvat offensively.

Trocheck is also considered a strong defensive centre, finishing 24th in Selke voting this season ahead of Horvat, who was 34th.

Unlike Trocheck’s deal, Tomas Hertl’s massive extension only aids Horvat and his agent in contract talks.

As rich as Hertl’s deal is, statistically, he is a more valuable player than Horvat.

Hertl decisively outproduced Horvat at 5-on-5 over the last three seasons with 2.11 points-per-60. He also has better underlying metrics at even-strength despite shouldering similarly tough matchups.

The San Jose Sharks also might have overpaid to keep Hertl. Vancouver also needs to consider that during negotiations.

Injuries limited Sean Couturier to 29 games this season. However, over the last three seasons, he basically profiles as a better version of Hertl.

Couturier’s underlying metrics are better than Hertl’s and he’s also slightly more productive offensively at 5-on-5.

Horvat’s new deal should also come in below this number.

Offensively, Schenn is a close comparable to Horvat.

Defensively though, Schenn wasn’t handling the same tough matchup minutes that Horvat has been accustomed to.

Brock Nelson crested the 25-goal, 50-point plateau for the first time in 2018-19 before signing this deal. However, that was largely due to a smaller role in previous seasons, and his 1.77 points-per-60 three years prior to signing suggests he was slightly more productive than Horvat (1.6 since 2019-20).

The key difference here is that Horvat has been a top matchup centre for multiple seasons, whereas Nelson began to take on that role with more regularity just one year before signing.

You could argue that the Anaheim Ducks overpaid for Adam Henrique, based on posting 20 goals and 36 points in 57 games after he was traded to them from the New Jersey Devils.

Henrique, although slighter than Horvat, profiled similarly as a two-way centre with offensive upside. However, both Henrique’s even-strength and power play production in three years prior to signing was inferior to Horvat’s.

Although the Kevin Hayes contract was widely seen as an overpayment, his statistical profile to Horvat prior to signing was very similar.

Hayes was a match-up centre who provided even-strength offence at a reasonable second-line rate. His 4.5 power-play points per-60 over from 2016 to 2019 also closely resembles Horvat, although he posted those numbers largely during second-unit duty.

What this means for Canucks and Horvat

The comparables above represent a good mix of both floors and ceilings for Horvat’s next contract.

Trocheck stands out as the most interesting comparable. Although he was one of the few players who got maximum term on his contract this offseason, his $5.625M cap hit is very reasonable.

In terms of the rest of the centres listed, Horvat is more proven now than Nelson and Hayes were at the time of their signings. He is also better defensively than Schenn, and a more well-rounded player than Henrique.

Deals signed by Couturier and Hertl represent the ceiling for Horvat. Statistically, they are superior players.

A team-friendly deal for Horvat likely comes in just a touch above Trocheck’s deal. The Canucks could also lower the cap hit by giving Horvat an eight-year extension.

A team-friendly deal of eight years at $6.25 million per season would be a massive win for the Canucks. It would help them solve their cap crunch while also giving them some space to keep the team competitive.

Don’t consider that the likely scenario because based on market value, some teams would likely be willing to give a 30-goal, 60-point matchup centre like Horvat a deal that closely resembles Couturier and Hertl’s contracts.