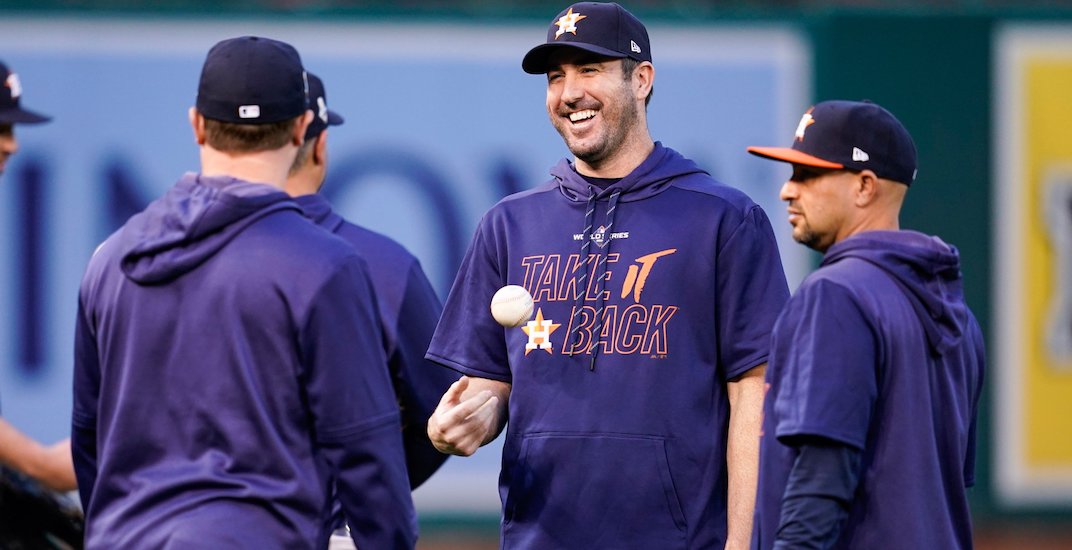 Major League Baseball handed down a severe punishment to the Houston Astros on Monday.

The Astros, it was confirmed, used electronic equipment meant for replay review to steal pitcher signs from opposing teams, and signalled them to batters. This was accomplished by loudly banging a metal trash can to notify a hitter if an off-speed pitch was coming.

Here’s an example from the Toronto Blue Jays’ visit to Houston in 2017:

ICYMI – This is the infamous garbage can banging noise from a Blue Jays and Astros game back in 2017. It's very clear if you listen with headphones, too. pic.twitter.com/FLevUbzKnj

Knowing what pitch is coming doesn’t guarantee a hit, but it does make it a lot easier.

And it certainly helped Houston with the 2017 World Series.

The players themselves were able to escape punishment because the commissioner’s office had explicitly stated that the GM and manager of any team found using electronic equipment to cheat would be held accountable.

Luhnow and Hinch, who had operated in tandem as Houston’s GM and manager since 2015 were both dismissed after the MLB’s sanctions went public.

The full extent of this scandal isn’t yet known, but it likely also involves the Boston Red Sox and a severe punishment for manager Alex Cora, who was the Astros bench coach in 2017 and is being accused of implementing a similar system in the 2018 World Series championship Red Sox season.

And there is a tie-in with the Blue Jays as well. Dave Hudgens, Toronto’s current bench coach, was the Astros hitting coach in 2017. While he isn’t explicitly named in the MLB report, it does suggest that lower level employees knew of the system and participated as well. It’s unknown what his role may have been, and it remains to be seen how the Jays management chooses to address it.

“I find that the conduct of the Astros, and its senior baseball operations executives, merits significant discipline,” said Commissioner Rob Manfred in his nine-page ruling.

“The conduct described herein has caused fans, players, executives at other MLB clubs, and members of the media to raise questions about the integrity of games in which the Astros participated. And while it is impossible to determine whether the conduct actually impacted the results on the field, the perception of some that it did causes significant harm to the game.”

So, the Astros as a team (but not the individual players involved) have been punished, the Red Sox, or at minimum Alex Cora, likely will be too — but why should anyone really care? After all, stealing signs has been a part of the game since signs were invented. So what if some teams used modern technology to accomplish it?

What impact does ‘raising questions about the integrity of games’ have on the casual, or even hardcore fan?

Part of the magic of baseball is the sense of the unknown. Every at-bat, every pitch, every fielding play — no matter how routine — can change the course of a game.

Consider the seventh inning of Game 5 in the 2015 ALDS, which resulted in Bautista’s legendary bat flip. Every play from the wild way Texas scored in the top of the inning, to the comedy of errors that led to the game-winning home run — every second was thrilling, and none of it could have been predicted.

If you take away that mystery, you end up with professional wrestling played with bats and balls.

We teach kids that a big part of sports is playing fair and learning to lose gracefully. It’s a hard lesson to explain when their heroes ‘win’ at all costs, and normalize cheating as just another tool in their competitive arsenal.

And cheating isn’t a ‘victimless’ crime — every pitcher who saw their game fall apart and didn’t know why, every hit that would have been an out, every coach who was mystified by how their signs were being read — every game that was won unfairly meant one that was also lost the same way. The Los Angeles Dodgers perhaps lost most of all, having been the World Series runner-up in 2017 and 2018.

Certainly, baseball has seen its share of scandals in the past — from gambling, to the steroid era, and now this. The sport has weathered them all. And to be sure, there will be fans, both fervent and fair-weather who just want to be entertained.

Baseball is entertainment. But it’s unscripted. It’s improvised theatre, one where everyone knows their parts and everyone is ready to play. Some performers getting their lines before the show takes away the purity of that.

Measures may be put into place to try and mitigate a cheating scandal like this again. They should be.

Most fans just want an even playing field. The majority of players definitely do. And they deserve that. That’s what makes baseball exciting and why it’s not over until the last out is made. That’s why the integrity of games matters. Here’s hoping most teams feel the same way.