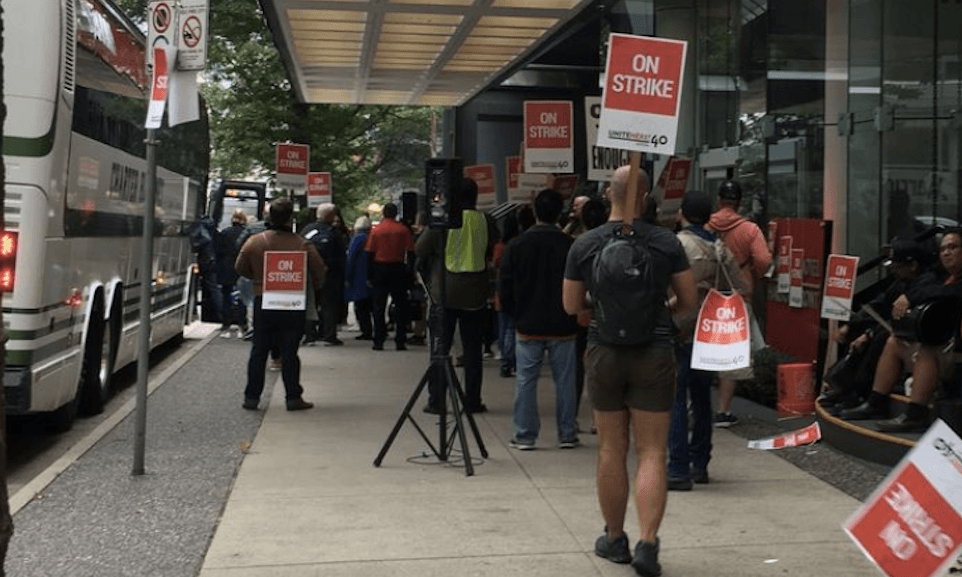 The union that represents workers at three downtown Vancouver hotels announced today it has launched an “indefinite strike” over the “need for safe and stable work.”

On Thursday morning, hotel workers from the Hyatt Regency, Westin Bayshore and Pinnacle Harbourfront hotels, represented by UNITE HERE Local 40, walked off the job in an open-ended strike.

According to the union, the strike is an “escalation” in a dispute which the union says began 14 months ago and relates primarily to the failure “to address significant outstanding issues related to workload, safety and job security.”

The strike action by the workers – which includes room attendants, chefs, front desk agents and other staff – is the first in almost two decades, the union said.

In a statement, the union said workers are “demanding that one job should be enough in Vancouver’s booming hospitality industry – which makes record profits year after year – while the cost of living continues to rise in Metro Vancouver.”

The union said many of the workers are “struggling to provide for their families with precarious, on-call shifts caused by the systemic cutting of hours in these hotels.”

Safety also “remains a priority in this dispute, as many workers have stepped forward with complaints of sexual harassment faced on the job, and extreme under-staffing has led to unsafe and unsustainable workload levels,” the union said.

Second similar strike of the summer

The strike action comes after nearly 300 people gathered at the Rosewood Hotel Georgia in downtown Vancouver in June to protest against the hotel’s working conditions that employees say “do not meet its five-star standard.”

According to UNITE HERE Local 40 –BC’s union for hotel and hospitality workers– employees at the top-ranked Canadian hotel want “industry-settings wages and job standards commensurate to the elevated level of service they are expected to provide.”