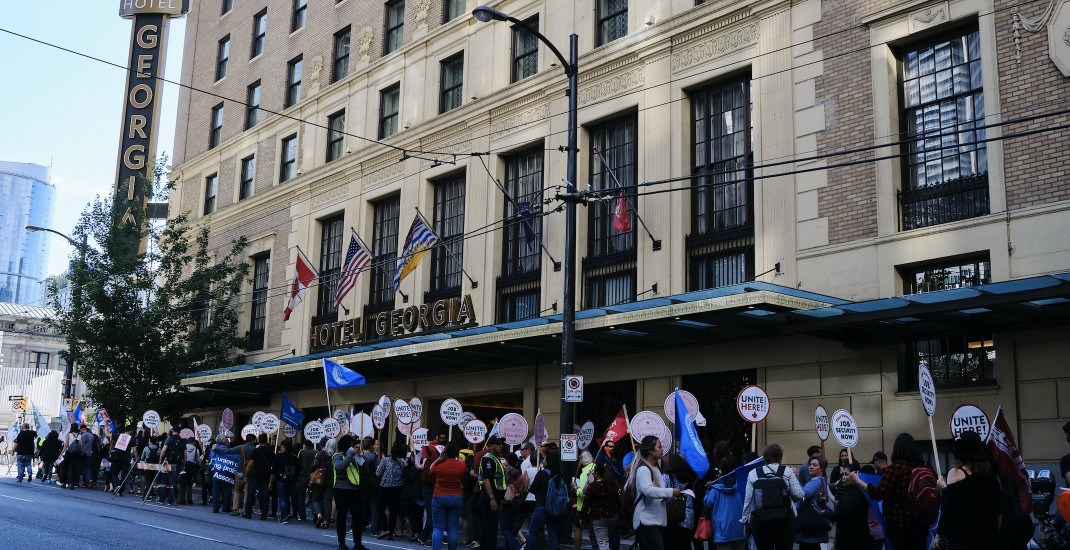 After negotiations which began nine months ago, and a strike by hotel workers that lasted 58 days, the Rosewood Hotel Georgia announced it has reached a “tentative agreement” with the union representing the workers.

In a statement, Hotel Georgia said an agreement with UniteHere Local 40 was reached after a “29-hour, non-stop bargaining session” on Friday and Saturday, in which both sides agreed “to produce a new agreement that will get our people back to work.”

In September, nearly 200 Rosewood Hotel Georgia employees walked off the job, demanding safer working conditions, after negotiations with the hotel broke down.

UNITE HERE Local 40, the union that represents BC’s hospitality workers, said in a statement that Hotel Georgia employees had been without a contract for eight months.

“The workers are demanding respect and working conditions which match the five-star service they provide on a daily basis to the hotel’s clientele,” the union said at the time.

Around the same time, hotel workers from the Hyatt Regency, Westin Bayshore, and Pinnacle Harbourfront hotels, represented by UNITE HERE Local 40, walked off the job.

According to the union, the strike was an “escalation” in a dispute which the union says began 14 months ago and relates primarily to the failure “to address significant outstanding issues related to workload, safety, and job security.”

The strike action by the workers – which includes room attendants, chefs, front desk agents, and other staff – was the first in almost two decades, the union said.

In announcing the tentative agreement, Hotel Georgia said the deal will “allow us to heal and work together to continue to provide our guests with a distinctive Rosewood experience.”

In particular, the hotel said it has “implemented a workplace safety program that the Union has called ‘ industry-leading’ and includes programs specifically designed to prevent harassment and discrimination and empower our employees around these issues.”

As part of its measures, the hotel said it has now also become the first Union-represented hotel in Vancouver to broadly install panic buttons covering the majority of employees across multiple departments.

With the tentative agreement, May Tanjusay, a room attendant and union bargaining committee member from Rosewood Hotel Georgia, said workers have “finally achieved the contract we deserve.”

Workers will vote to ratify the contract until 5 pm today.