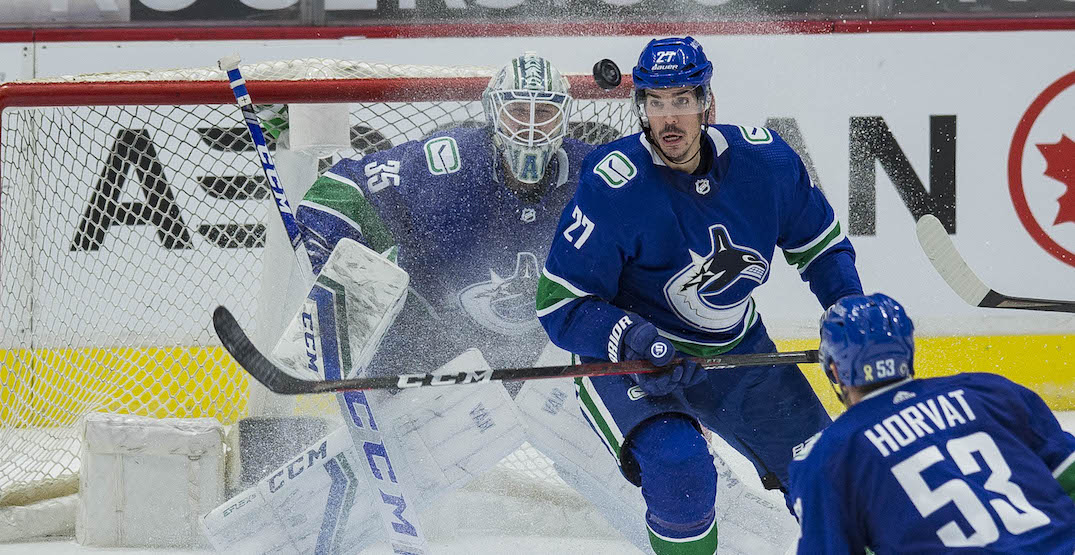 Travis Hamonic is back as a member of the Vancouver Canucks.

After a short stint in Abbotsford, the 31-year-old defenceman skated with his teammates at Rogers Arena, and could make his NHL season debut as early as tonight against the New York Rangers. He lined up on a pairing with Luke Schenn at practice according to those in attendance at practice, though there’s a chance Kyle Burroughs could dress tonight instead.

Hamonic was emotional when speaking to the media for the first time this season on Monday. Though he didn’t want to reveal exactly what he was going through, calling it “personal,” he did say that he was “vaccinated.”

“I am vaccinated, and I’m following all the protocols right now that are in place until that process is done,” said Hamonic. “I’m here, I’m excited to be here, I’m proud to be a Canuck. This has been an extremely difficult time for me the last little while.”

Personal or not, Hamonic’s vaccination status impacts his profession. Until Hamonic is fully vaccinated, he won’t be allowed to play in games in the United States. The Canucks aren’t offering a timeline, but whether or not Hamonic joins his teammates on their next road trip beginning November 11 in Colorado will be telling.

Regardless of Hamonic’s reason for being away from the team, it’s clear that the Canucks are happy to have him back. While their back end has held up better than expected, Hamonic was pencilled in to be a top-four defenceman, and he makes them better.

With Hamonic in the fold, the Canucks have more options. Hamonic can solidify the third pair, or elevate to play with Quinn Hughes or even Oliver Ekman-Larsson, allowing one of Tyler Myers or Tucker Poolman to move back to the third pair.

Hughes was especially happy to see his old defence partner back on the ice, judging by this tweet from Sportsnet’s Brendan Batchelor.

Quinn Hughes gives Travis Hamonic a big bear hug on the ice prior to the start of #Canucks practice at Rogers Arena.

Captain Bo Horvat said that Hamonic spoke to his teammates, seemingly providing a few more details than have been shared publicly.

“He came in and talked to us, and explained his process and what he was going through,” said Horvat after Tuesday’s morning skate. “I commend him for that because it wasn’t easy for him. For him to come and talk to the team about it, and open up, I think it was really good. We’re happy to have him back and can’t wait for him to play.”

Hamonic, for his part, was very grateful for how the Canucks have handled his situation.

“It goes without saying how thankful and appreciative I am to the entire organization. Right from ownership, to management, to coaches, especially the players,” Hamonic said in a prepared statement on Monday. “They have been extremely respectful… they’ve been more than helpful and especially supportive through this time for me and my family. It hasn’t been easy, by any means.”

“We are a family inside that dressing room.”