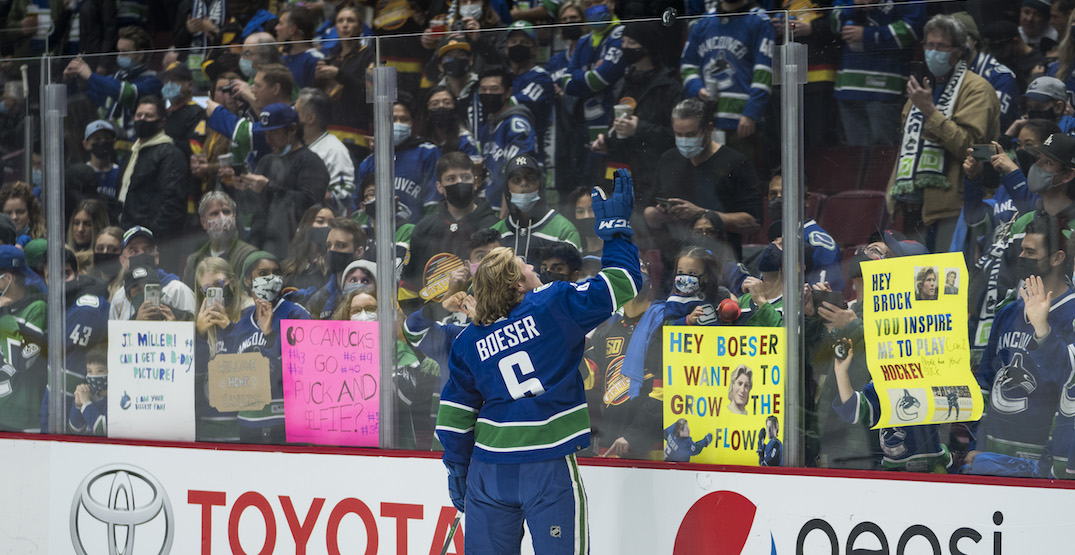 October ended in demoralizing fashion for the Vancouver Canucks.

After a semi-decent six-game road trip, the Canucks flushed away any goodwill they’d accumulated by beginning their seven-game homestand with three straight losses.

In those three losses, they’ve only scored four times.

Aside from save percentage, the Canucks are below league average in almost every category. That makes their 3-5-1 record seem just about right considering how mediocre they’ve been.

It’s clear that multiple players will have to step up if the Canucks are going to avoid letting their season slip away in November. That being said, there are three skaters in particular who seemed primed for some better bounces in the upcoming games.

Although none of the Canucks have consistently looked dangerous at even-strength, Brock Boeser’s arguably been their biggest scoring threat.

At even-strength, Boeser leads the team in scoring chances created. Despite leading the team, he has failed to register an even-strength point in nearly 93 minutes of hockey at five-on-five.

Holyyyy what a save by Cam Talbot on Boeser #Mnwild pic.twitter.com/FawoPWwNCa

Not only has he failed to register a point, but he hasn’t even been on the ice for an even-strength goal yet this season.

The 24-year-old did end October strong, scoring his 100th career goal with five seconds remaining in the Canucks 2-1 loss to the Oilers.

Boeser is due to score more goals in the coming games. And, unlike some players, at least he’s creating opportunities. Boeser’s underlying metrics suggest he’s due for a breakout more so than his first-line counterpart, Elias Pettersson. However, a breakout for one of those guys will assuredly have a positive impact on the other.

At the conclusion of the road trip, it was evident that the two best Canucks forwards were the two smallest and feistiest in Conor Garland and Nils Höglander.

Head coach Travis Green has used the young Swede as a “Mr. Fix It” type of player, slotting him throughout the lineup. It’s easy to see why Green does this, as Höglander can inject life into his linemates based on his blend of hard-work and dazzling puck skills.

The thing is though, Höglander has just one assist in his last eight games, after registering a pair of assists on opening night.

Like many Canucks, Höglander’s play has tailed off during this three-game tailspin on home ice, However, he has been one of the more effective Canucks this season at both ends of the rink.

No Canuck forward has been on the ice for fewer shot attempts against than Höglander, an impressive feat considering that he’s spent time on a checking-orientated third line with Jason Dickinson. He’s also one of the team leaders in individual scoring chances created.

Although he’s one of the youngest players on the ice, the 20-year-old winger was a team leader at even-strength last season. His slow start seems like a combination of bad luck and the fact that he’s been bounced around the lineup.

It looks like he will get a chance to play with his two most common linemates from last season in Tanner Pearson and Bo Horvat when the Canucks kick off their November schedule.

Oliver Ekman-Larsson was arguably the most impressive Canucks players in October, aside from Thatcher Demko.

The veteran defenceman is off to a strong start. He’s fared well against top competition, and he leads the Canucks with an impressive 54.8% Corsi-for percentage. Ekman-Larsson is also the only Canuck who has a scoring chance differential above 50%.

For a team that’s starved for offence, the 30-year-old is doing everything he can to create chances. However, he hasn’t been rewarded for it on the scoresheet.

OEL leads the team in shots with 34, which is 10 more than the next Canuck (Tanner Pearson). Despite peppering the opposition more than any of his teammates, he only has one goal, which he scored on opening night.

At even-strength, Ekman-Larsson has an individual points percentage of 16.7%, meaning he only has a point on one of the six goals that he’s been on the ice for. That’s abnormally low, and there’s no reason to believe he shouldn’t inch closer to his career average, which is around 40%.

Quinn Hughes might be the Canucks most dangerous defenceman, but Ekman-Larsson is the team’s best all-around blueliner at the moment. He should be rewarded for his efforts with a few more tallies on the scoresheet in November.