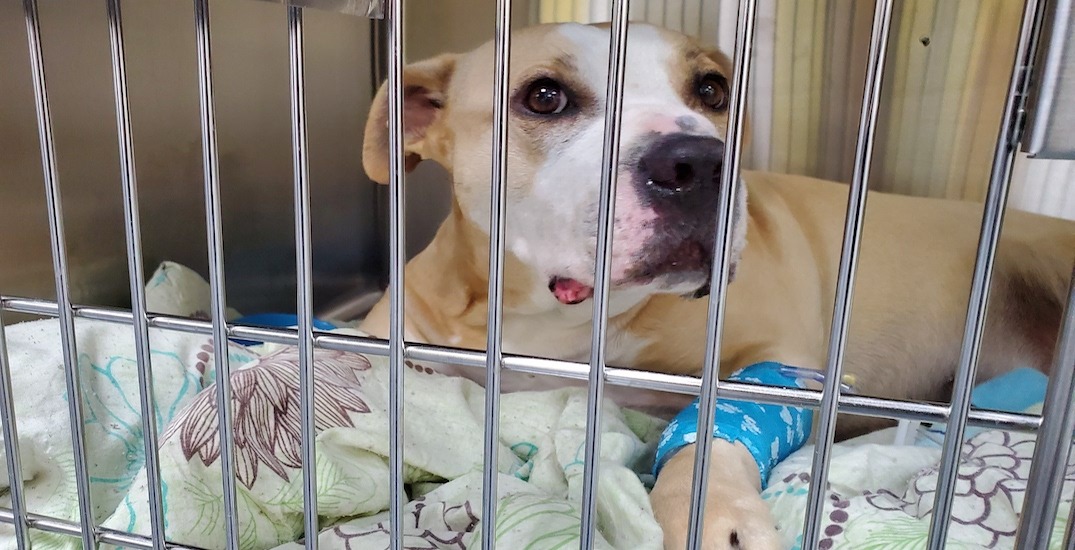 After a serious car crash on the way to a Richmond food bank last week, a veteran is waiting to find out what his best friend’s future is going to look like.

Gregory Wright, a Canadian Coast Guard veteran with post-traumatic stress disorder, was renovicted five years ago from his home and has been homeless since with his eight-year-old Staffordshire Terrier, Rocky.

In a phone interview with Daily Hive Vancouver, Wright said that it was impossible to find an affordable home for him and Rocky that allowed pets, and he would rather live on the street than give up his best friend.

Wright said it was meaningful work with the Canadian Coast Guard, but there were unfortunate circumstances that led him to come down with PTSD, severe anxiety, and depression, so his doctor recommended he get an animal companion.

After taking his doctor’s advice, Wright said he found Rocky through a family that was just too busy for the little guy, and ever since “we’ve been inseparable.” 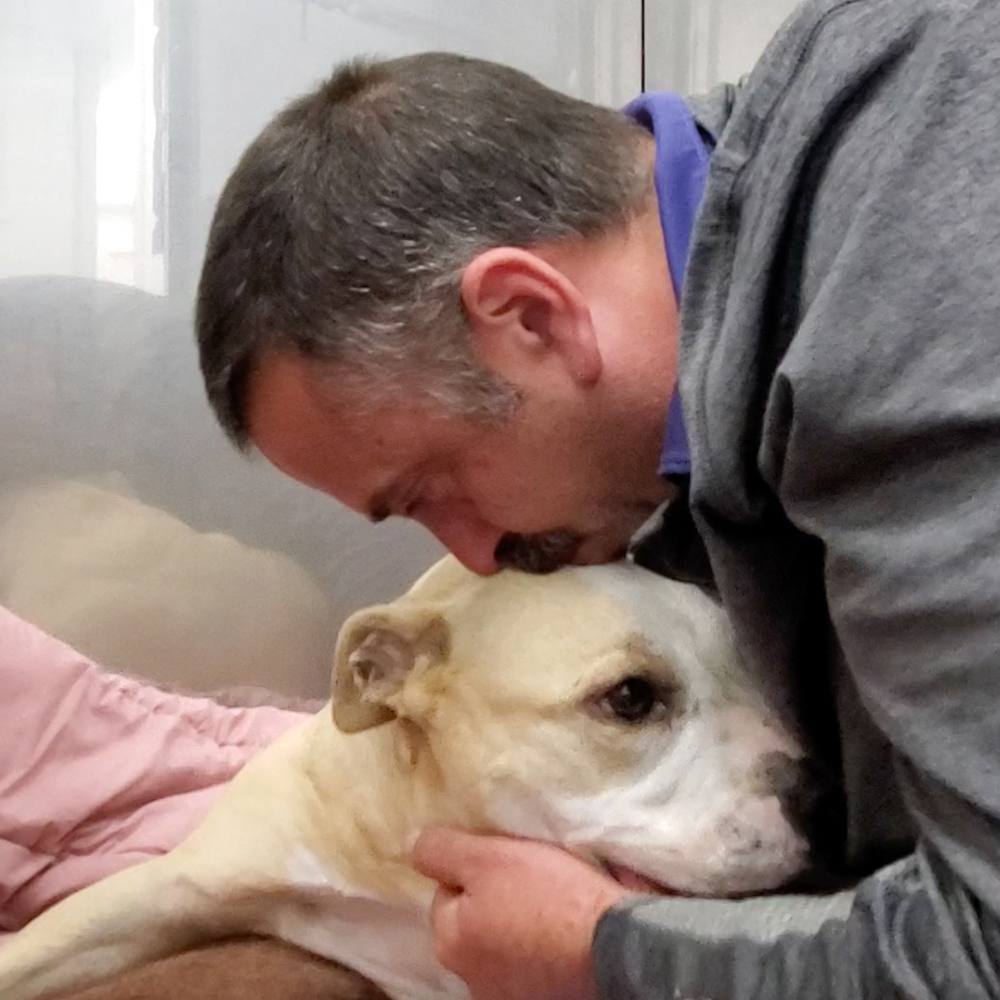 “He’s [Rocky] my best friend, almost everything that I have in life is because of him. He’s taught me compassion again, just to love again,” Wright said.

“Living with a mental disability is not easy and having him with me and consoling me all the time, it helped immensely,” adding because Rocky loves people, it helps him to socialize.

After Wright lost his house in Ladner because the new owner wanted to renovate, he said having a dog and being on disability made him virtually untouchable to landlords.

Giving up Rocky for a place to live “was not an option,” Wright said. “He’s my everything.”

With little to no options, he ended up homeless and buying an RV.

After two years living on a dike in Richmond, Wright said he met the owner of Soggy Doggy dog walking who then offered the pair a safe place to park while he looked for a place to rent — and until today, still can’t. 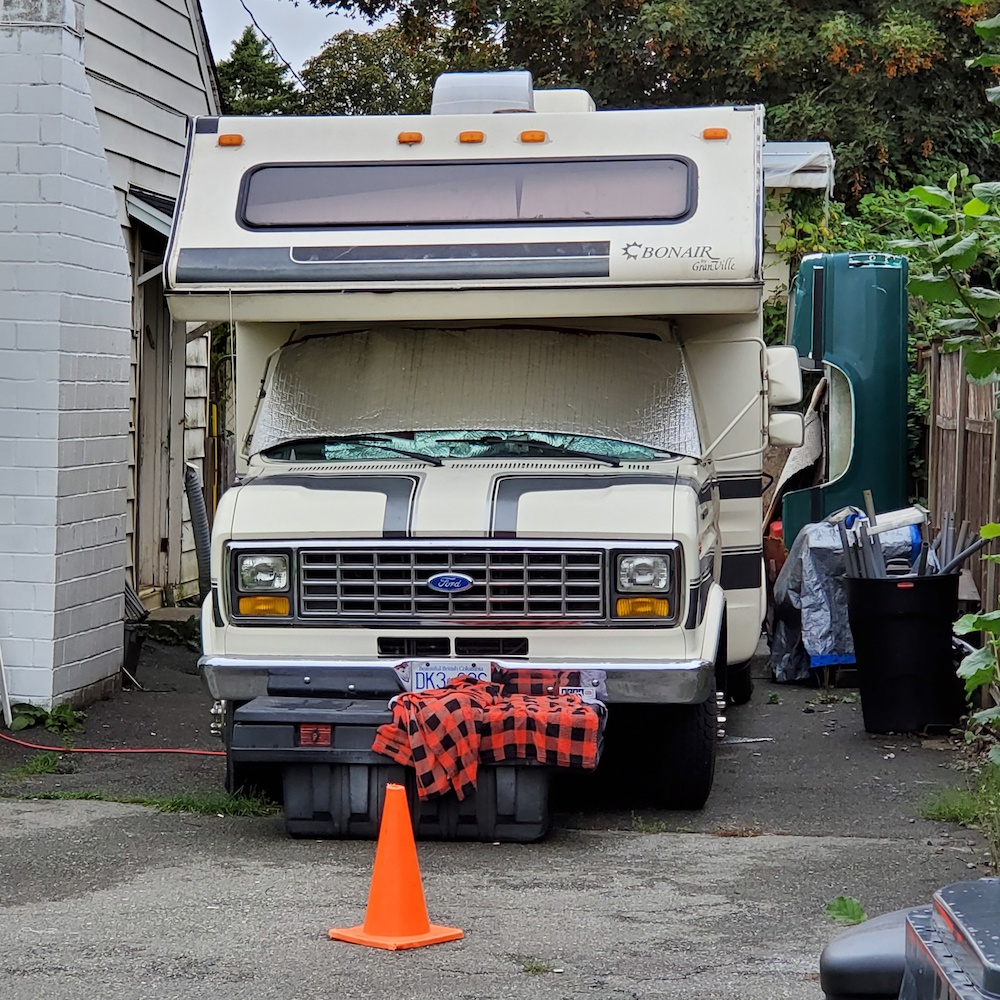 Wright and Rocky’s life took a sharp turn last Wednesday, after borrowing his landlord’s car for to the food bank.

Wright explained that Rocky was feeling nauseous when the pair exited the Massey Tunnel southbound, so Rocky tried to move from the front of the vehicle to hide in the back seat, but became stuck — with one hand on the wheel, Wright tried to help Rocky get free but ended up hitting a telephone pole, the vehicle flipped several times into a ditch.

“I didn’t realize Rocky was hurt at the time. I was more concerned about him anyways,” Wright said, adding Rocky lost the use of his rear legs and tail.

“The firefighters put him on the street until I got out of the car, he was struggling — he could not move,” Wright said that’s when he immediately called the Regional Animal Protection Society (RAPS) hospital.

“They brought me in right away. I have not a penny to my name and that was not the issue, the issue was to take care of Rocky,” Wright said.

A community fundraising campaign is underway for Rocky that was started by the not-for-profit RAPS animal hospital as he faces ongoing veterinary procedures in Richmond, where remains as he suffers from broken ribs, and possibly a spinal injury. 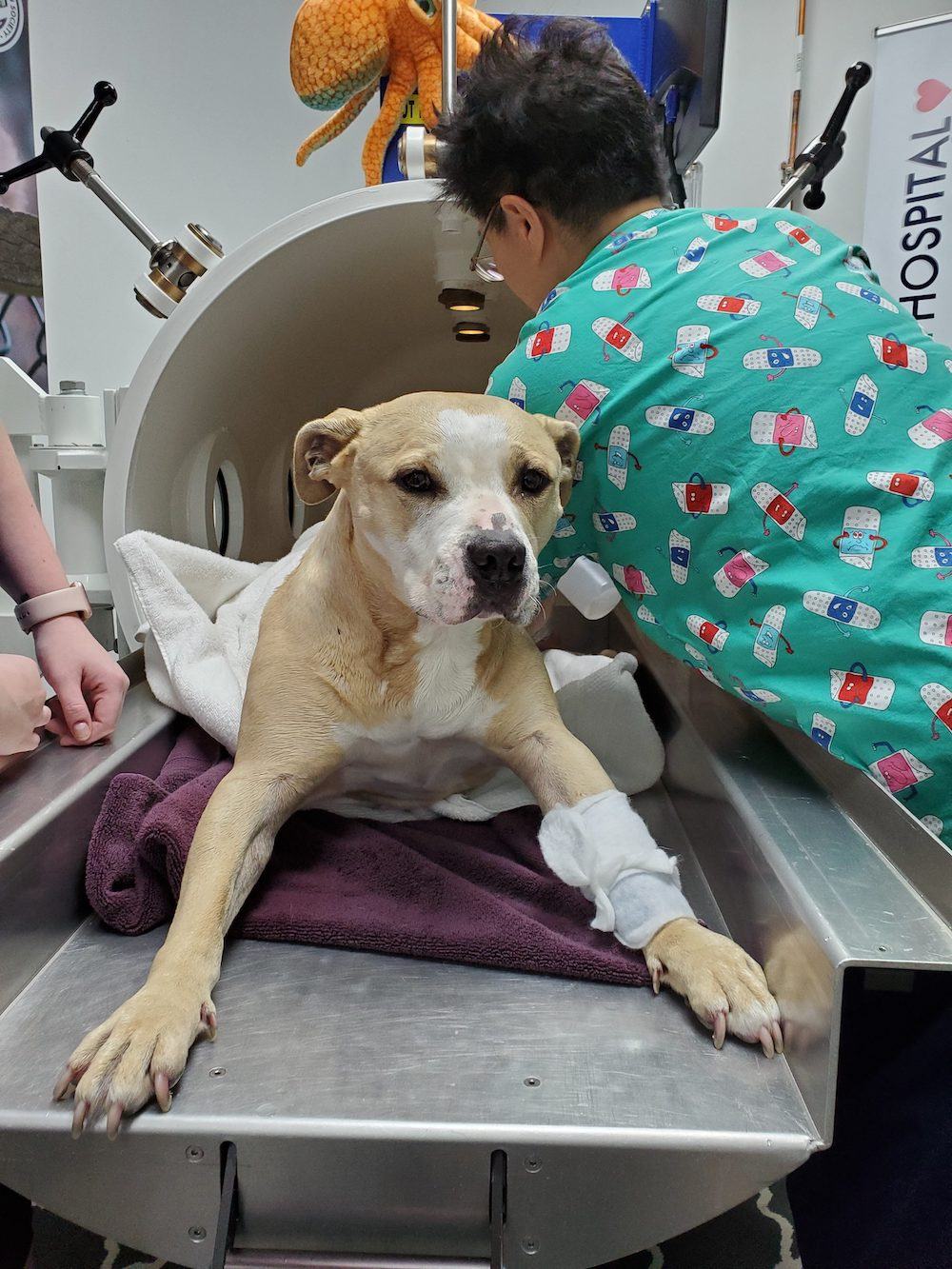 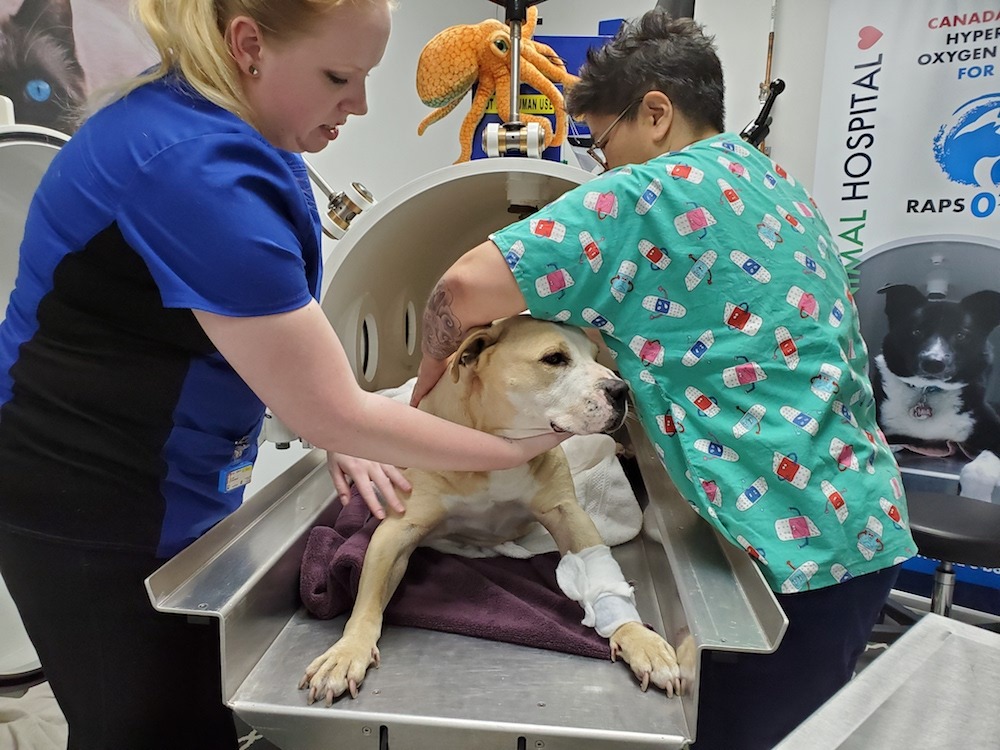 In addition to the hospital treatments, Rocky will likely undergo hyperbaric oxygen therapy to counter inflammation and encourage natural healing, according to RAPS.

While RAPS is a full-service vet facility, it doesn’t have an MRI machine, which Rocky needs to determine if he has a spinal injury — costs are now adding up to be around $20,000, it said.

RAPS CEO Eyal Lichtmann said the facility is able to provide vet care at lower costs through donations, but because it doesn’t have an MRI machine, that’s where the additional costs create a roadblock. 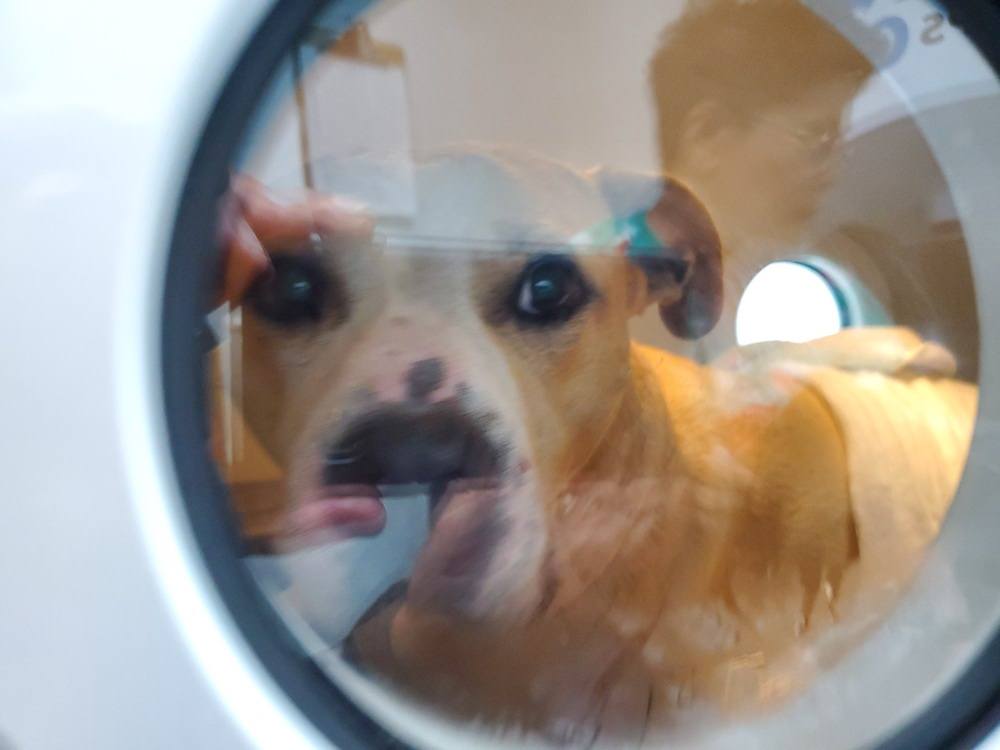 “In the meantime, we’re gonna provide the best care we can until we raise the money to continue to care for Rocky, and Greg needs Rocky, it’s his support dog,” Lichtmann said, “the bond is huge between the two.”

Lichtmann said after Rocky works with specialists, that’s when RAPS will assess how to help the dog, for example “if his spine is totally broken and not fixable, repairable, then we would find a way so that Greg could take care of Rocky in a wheelchair, a dog wheelchair at home for the rest of his life, and help that way,” adding “Rocky deserves to live, either way, we’re gonna do everything we can to help Rocky.”

Wright is going to the hospital everyday to see Rocky, “he still wants to lick my face,” he said, now the focus is just on his best friend and “back to a comfortable position where he can enjoy a quality of life that he deserves.”

Anyone who is interested in helping Rocky and Wright can go to RAPS’ website for more information, or by calling 604-285-7724.