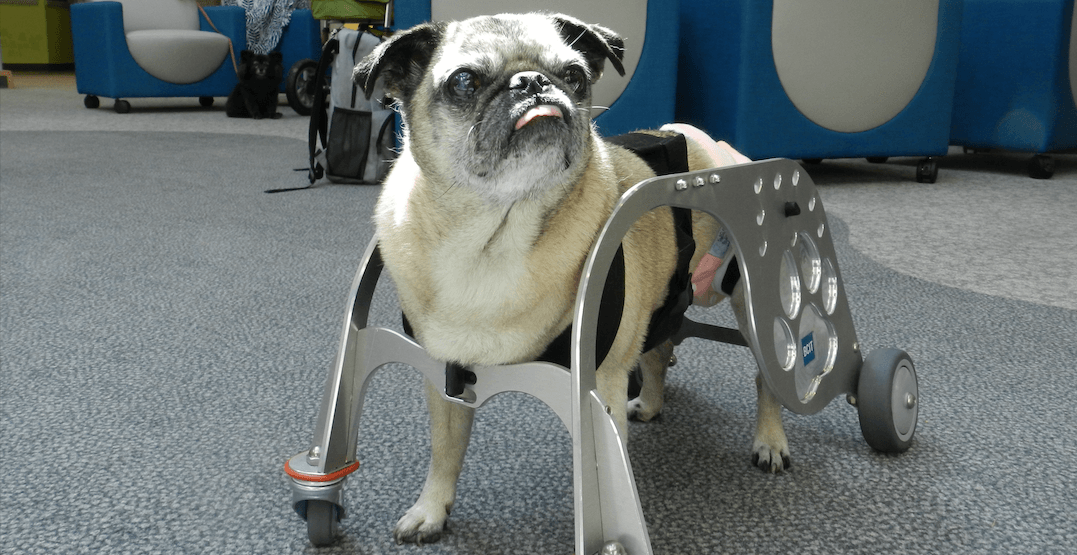 Lily the pug in her wheelchair (Hilary Leung/Daily Hive)

A dog wheelchair is bringing senior dogs and their owners closer together.

Ann-Marie Fleming, the founder of Dog Quality which is focused on helping senior dogs, teamed up with BCIT’s MAKE+ team to design a wheelchair for senior dogs.

Just like humans, when dogs age, health complications arise like muscle atrophy and osteoarthritis which make it difficult for senior dogs to move around.

Existing dog wheelchairs aren’t catered to senior dogs, according to Fleming and Dr. Silvia Raschke, a researcher from the BCIT MAKE+team. They’re good for young dogs because of the focus on front strength, but for older dogs who may have weak front and back legs, these wheelchairs won’t be of much help. 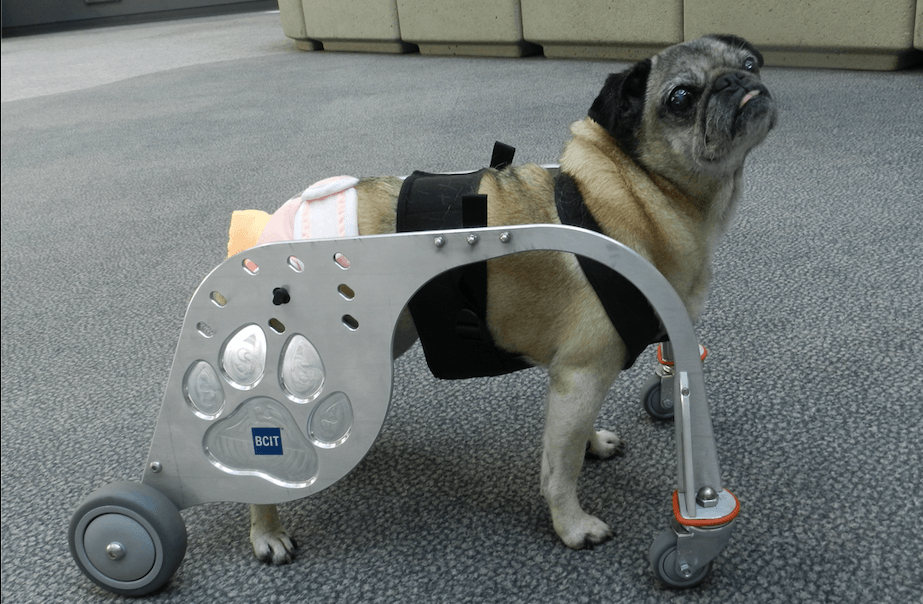 Lily the pug in her wheelchair (Hilary Leung/Daily Hive)

The MAKE+ team uses applied research to “solve problems that people in the community or an industry bring to us,” according to Raschke.

Raschke has worked on assistive devices for canine and equines in the past, but for the most part, the BCIT team was embarking on uncharted territory: the team works mainly in human medical devices.

“We don’t have the same resources and databases to draw on for veterinary or rehabilitation device design.” Raschke said. “So that’s where you have to now start doing that listening…we actually have to go out and talk to people.”

The BCIT team worked with Fleming, and had multiple consultations with veterinarians and other owners with senior dogs and had a framework of things to consider when making the wheelchair.

In designing this, they were careful to make sure that the weight would go to the chest area, rather than the legs, so the support would be more central.

They also had to make sure the wheelchair was light and maneuverable. Existing assistive devices make it difficult for senior dogs to propel the device forward.

“It might help them stand but it may not give them mobility because it’s just too hard for them.” Fleming said. 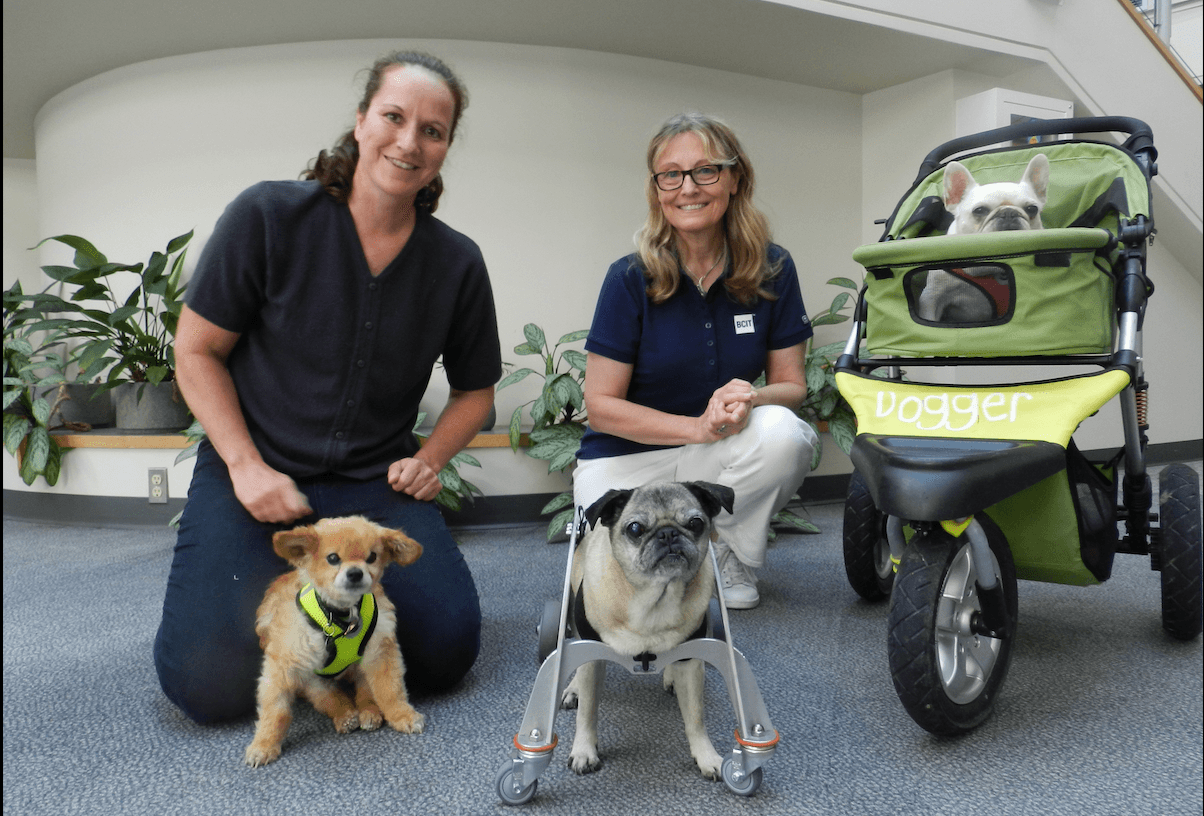 A harness with a V-shaped hard chest plate was designed to ensure that it would apply pressure in the safest places. After it’s on, it’ll be attached to the frame of the wheelchair.

The wheelchair is placed over the dog (without touching them) and then rear supports are secured to the dog’s hind legs. Leg rings were not used to avoid chafing and waddling.

The team also spent some time trying out different wheels so that hair wouldn’t get clogged up. Fleming is currently looking at other options so the wheels have both indoor and outdoor functions.

The prototype is made of aluminum and weighs 5.6 lbs with the wheels. The team hopes to reduce it by two pounds by using carbon fibre.

Lily trying out the wheelchair

Lily is a 14-year-old pug and underwent back surgery to stabilize her spine and repair a herniated disc a few years ago.

With Lily being an older dog, one of the important things to maintain her health would be to exercise but she couldn’t walk far.

“The intervals where she’s walking are getting shorter and shorter because she’s telling me she doesn’t want to keep going.” She said. 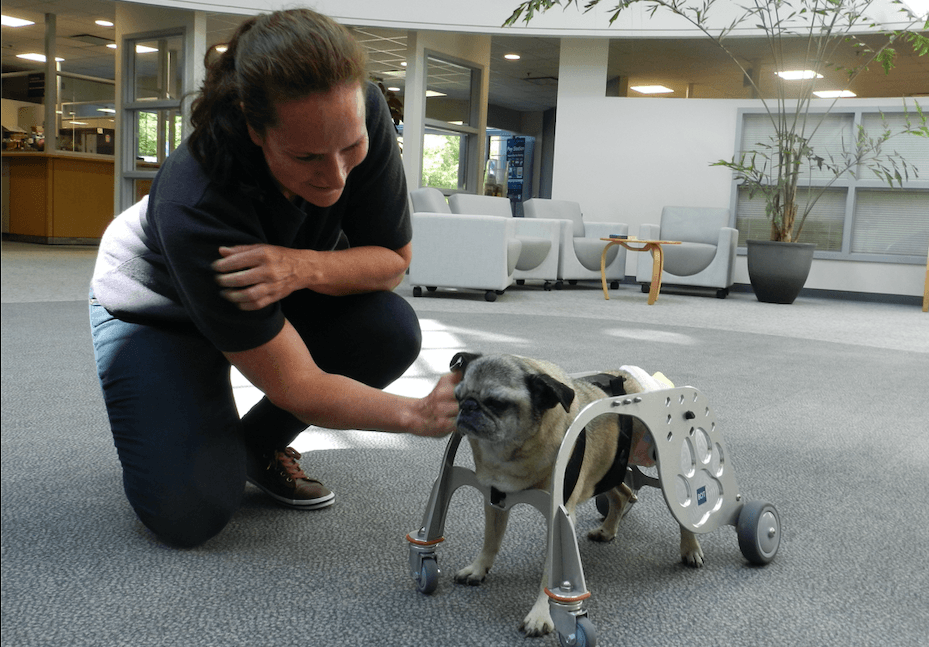 The first time Lily used the wheelchair caused a great deal of excitement in the room amongst the research team and Fleming.

“We could not stop her in that,” Fleming said with a laugh. “I had to take her out of the device to stop her from zooming around.”

And she sees a difference in Lily every time she exercises. “She eats better, she’s got more energy, she moves better, I see that she’s loosened up.” Fleming said. “And all the times when we don’t do anything, I see the decline.”

With the device, Lily’s legs and back are straight and, as a result, has better posture. The wheelchair enables senior dogs to move “in a more natural position that’s going to help them and not hurt them.”

Fleming wants to remind senior dog parents that just because their pet is getting older, it shouldn’t be something to be sad over. “This could be a real happy time of life,” Fleming said.

“Oftentimes the body is just not cooperating but the spirit is there and the will is there.” She said. “All they need is a little bit of help.”