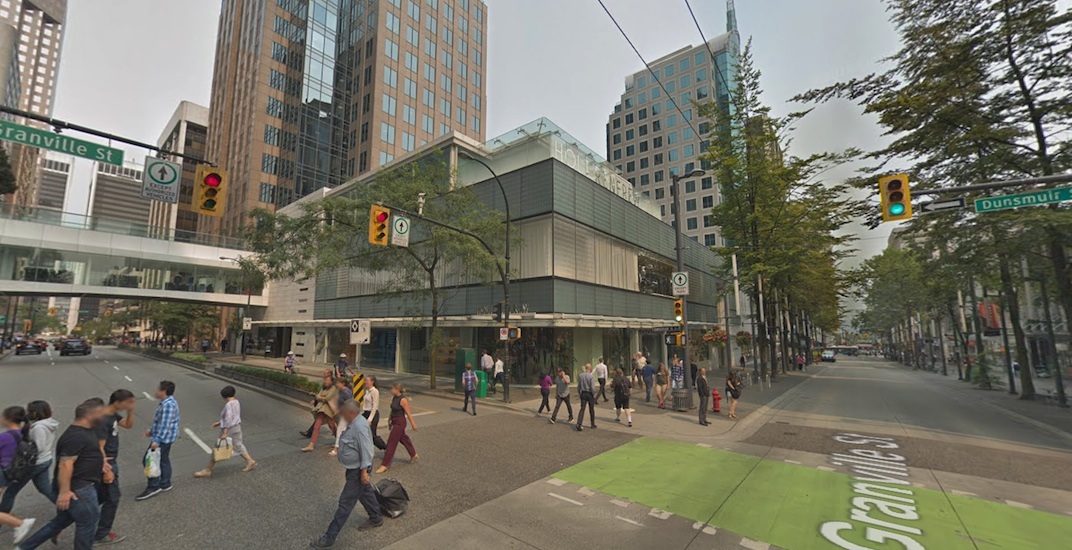 The planned indoor event space and patio is located on the fourth floor of the Holt Renfrew Vancouver building at the corner of Dunsmuir Street and Granville Street. (Google Maps)

A rooftop space on the fourth floor of Holt Renfrew’s downtown Vancouver flagship store will be turned into an event space.

Vancouver City Council is expected to approve an application by the luxury retailer that turns a rooftop space — dubbed ‘The Apartment’ — completed in 2007 into an exclusive luxury space to host events. Event organizers can use the space for a pre-booked event, such as a designer fashion show, product launch, and celebratory receptions.

This space was built as part of the Cadillac Fairview-owned building’s renovations in the mid-2000s, when CF Pacific Centre’s original food court and atrium wing was completely overhauled into a new and expanded store location for the retailer. The southeast corner rooftop overlooks the intersection of Dunsmuir Street and Granville Street.

A 1,200-sq-ft indoor pavilion will have an interior capacity for 60 people, and an adjoining outdoor patio area will have a capacity for 40 people. This closed-off rooftop space can be accessed from the staircase next to the pedestrian bridge over Dunsmuir Street or an elevator located directly adjacent to the main entrance.

It was originally slated to become a Holt’s Café location, but the space was never utilized for its intended purposes and the cafe was instead later built into another part of a store — the second level of the 2016 expansion that grew the store’s floor area by 40,000 sq. ft. on the Howe Street side of the building, where Sport Chek used to be.

In 2017, Holt Renfrew turned the pavilion into a personal shopping space.

If approved by City Council, events in the space can run from 9 am to midnight between Sundays and Thursday, and from 9 am to 1 am on Fridays and Saturdays. But patio operations must end at 11 pm, in accordance with City bylaws.

No music or entertainment is permitted on the patio, and food service must be provided during all hours of operation.

Holt Renfrew plans to open up food menu items from Holts Café for users of the new event space, and a small kitchen originally slated for the cafe will be the service point for guests for both food and beverage.