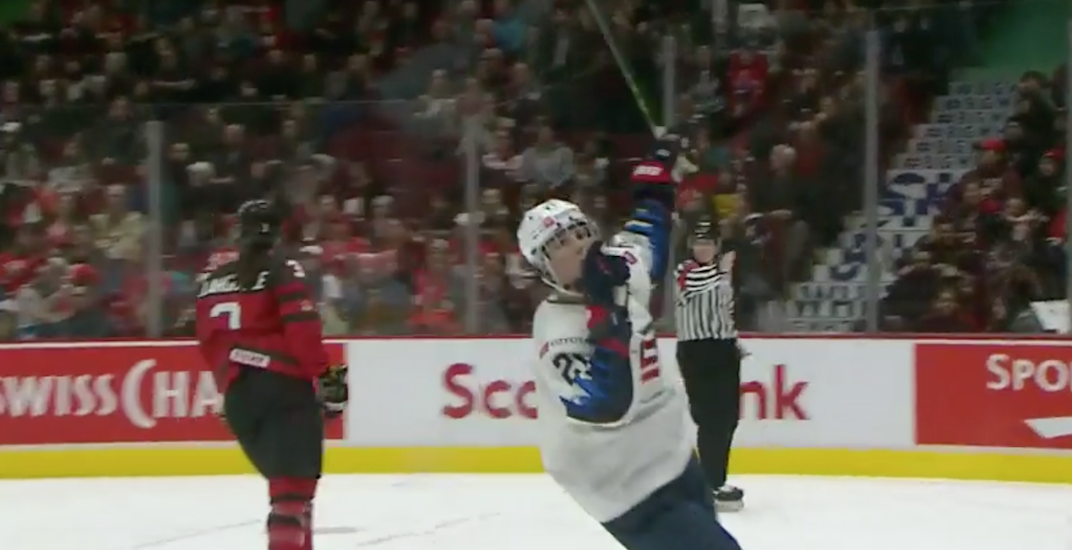 USA’s Hilary Knight does not have pleasant memories from the Vancouver 2010 Olympics.

On Wednesday night at Rogers Arena, with Canada trailing 2-1, goaltender Emerance Maschmeyer was pulled for an extra attacker. Knight scored an empty net goal to help her country seal the Rivalry Series with a 3-1 win over Canada.

Knight’s celebration caused a stir, as she celebrated by shushing the 8,467 fans in attendance.

Revenge was clearly on the minds of some of the US players as they hit the ice on Wednesday, and it appears Knight hasn’t forgotten about her first Olympic experience.

“Yeah a lot of it is from 2010,” Knight told reporters post-game. “I had some back and forth after our gold medal loss with the fans up here. I definitely take that to heart. They were pretty quiet the entire game. I’m happy we could get a win and go back to home soil and play in front of our home crowd.”

First time 🇨🇦 has played at @RogersArena in 3⃣6⃣3⃣3⃣ days.

Knight was on the American team that lost the 2010 Olympic gold medal game in Vancouver.

“We were told to go back to our country and die,” Knight said bluntly. “I took it pretty personally. It’s salt from 10 years ago.”

The Sun Valley, Idaho native did not have any family in attendance last night.

“They’ll come in the US,” Knight told Daily Hive earlier this week. “They don’t like coming to Canada because they got treated poorly in Vancouver.”

The reaction from the other end of the rink was as you would expect. Canada’s lone goal-scorer was none too pleased with the celebratory antics.

“It is, what it is,” Canadian defender Jocelyne Larocque said post-game. “Let’s just say I’m happy she’s not on my team.”

“It’s just part of the game, it’s no big deal,” Ryan said. “I don’t coach Hilary Knight, that’s for their coach to deal with.”

A decade later and there’s still leftover animosity between these two arch rivals.

“There’s a few players in that room that were here in 2010,” said USA captain Kendall Coyne Schofield. “We all watched it, who weren’t there. There’s definitely a revenge factor for those guys and this group coming into this building.”

USA’s lineup featured four players who lost gold to Canada in 2010, while Marie-Philip Poulin, Rebecca Johnston, and Meaghan Mikkelson were the only players in Wednesday’s game that won gold in 2010.