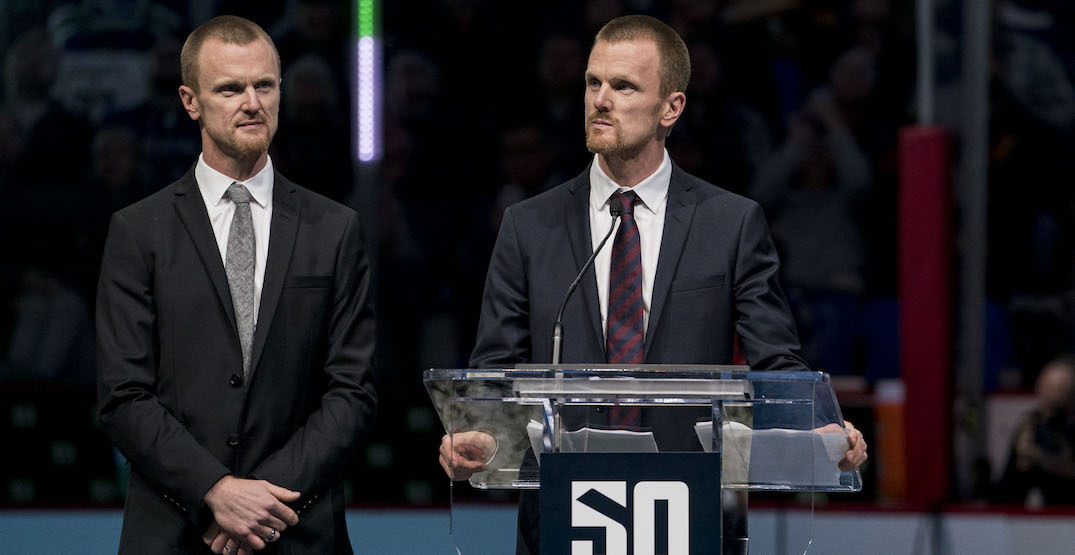 The Vancouver Canucks announced today that they have added four people to their player development staff, including the Sedins. Other additions include former Canucks winger Mikael Samuelsson and former NHL defenceman Mike Komisarek, who are each joining the organization.

The Sedins were first hired to the Canucks front office last year as special advisors to the GM under Jim Benning and held onto those roles after Patrik Allvin was hired.

“After spending a season gaining knowledge and experience in the club’s Hockey Operations department as Special Advisors to the General Manager, Daniel and Henrik Sedin will transition to new roles within Player Development, working daily on and off the ice with young players in Vancouver and Abbotsford,” the Canucks explained in a media release.

“We’re pleased to have solidified our Player Development department for next season with the additions of Mikael Samuelsson and Mike Komisarek, as well as Daniel and Henrik Sedin,” Allvin said in a media release. “Cammi Granato and Ryan Johnson led an extensive search to find the individuals with the right attributes, winning pedigrees, and who fit the overall strategy of the Vancouver Canucks moving forward.”

Samuelsson played 145 games for the Canucks between 2009 and 2011 and won a Stanley Cup with the Detroit Red Wings in 2008. The 45-year-old worked as a European development coach with the Chicago Blackhawks from 2017 to 2020 and most recently worked as general manager of Södertälje SK in the HockeyAllsvenskan league in Sweden.

Komisarek played 551 NHL games with the Montreal Canadiens, Toronto Maple Leafs, and Carolina Hurricanes before getting into coaching in 2014. The 40-year-old was an assistant coach with the University of Michigan for two years (2014-2016) while he completed his degree in sports management and communication, and more recently worked as a player development coach with the Buffalo Sabres (2017-2020).