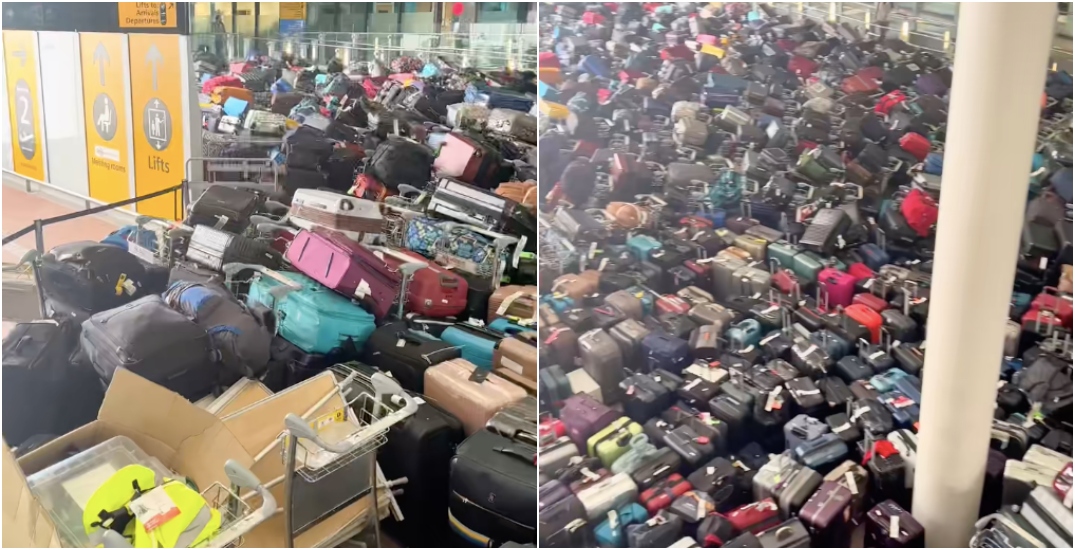 It seems as though major airports around the world are having luggage chaos competitions.

Over the weekend, a TikTok went viral showing an immense luggage backlog at Heathrow Airport in London, England.

“Heathrow Terminal 2 has almost as much baggage as you do,” reads the caption from user @huyayyy. In 2021, Heathrow was the seventh busiest airport in the world by international passenger traffic and the largest in London.

Since being uploaded to the popular social media platform, the chaotic video has received over 520,000 likes.

While speaking with Daily Hive, a Heathrow spokesperson said delays and luggage congestion were the result of a “fault with the airport’s fuelling system,” which resulted in departure flight delays.

Heathrow says the London-based airline is expected to announce “further cancellations” throughout the week as it enters the peak holiday season.

Last week, Air Canada announced it would be slashing several flights from its schedule for July and August across the country.

In a statement emailed to Daily Hive, Air Canada President and CEO Michael Rousseau shared that the carrier is making “meaningful reductions” to the schedule in order to reduce passenger volumes and bring operations to a flow that the air transport system can accommodate.

“The COVID-19 pandemic brought the world air transport system to a halt in early 2020,” Rousseau said. “Now, after more than two years, global travel is resurgent and people are returning to flying at a rate never seen in our industry. Regrettably, things are not business as usual in our industry globally, and this is affecting our operations and our ability to serve you with our normal standards of care.”

Rousseau says the surge in travel has created “unprecedented and unforeseen strains on all aspects of the global aviation system,” causing airport congestion, customer service problems, and flight delays. He says meeting travellers’ demands is harder than it was before the pandemic.