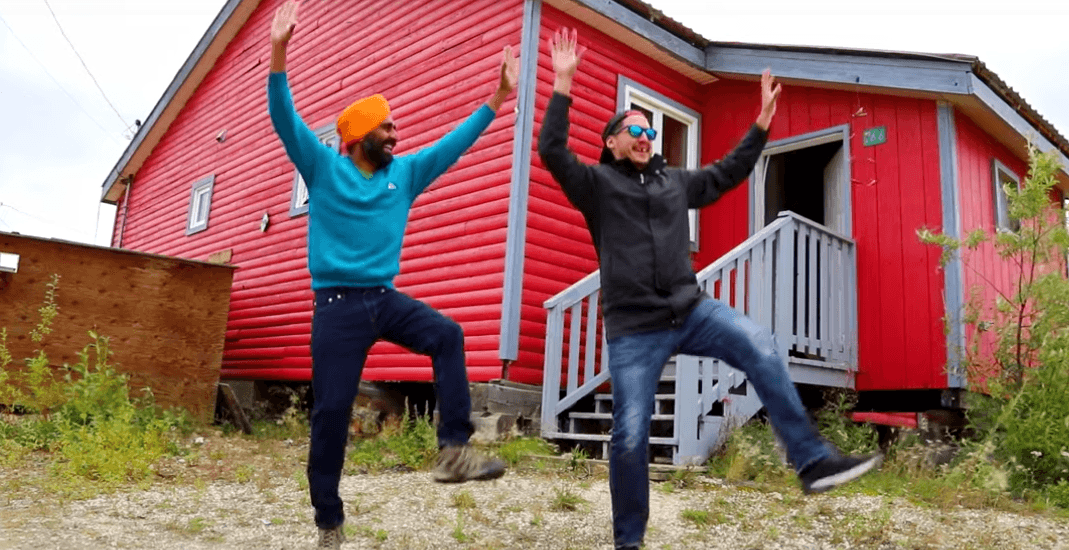 Gurdeep Pandher loves Canada just as much as he loves bhangra dancing.

Hailing from the small town of  Siahar, India, Pandher moved to Canada in 2006 and travelled across the country for a few years before settling in Whitehorse, Yukon, where he soon started teaching bhangra classes.

Pandher — a Sikh man from the Punjab who proudly wears a turban —  is one of the few South Asians who reside in Whitehorse and in his early days of living there he came across some people who were misinformed about his cultural background.

“Here, many people, they didn’t know who I was,” Pandher told Daily Hive. But then he got the idea to use his passion for bhangra — the traditional, upbeat Punjabi folk dance — to break down barriers.

Soon, Pandher was teaching bhangra classes to locals and even had the chance to collaborate and film a dance video with Whitehorse Mayor Dan Curtis.

What Pandher didn’t expect was for the video to go viral.

“I think overnight one million people had watched that video [on Facebook],” he said.

The video was also picked up by media outlets across Canada and by England’s BBC News Network.

Pandher says his collaboration with the mayor “ignited a lot of discussions” in the Yukon and across the country and this inspired him to “follow this passion even more.”

Since then, Pandher has filmed dozens of bhangra videos with Canadians from all walks of life, building human connection, understanding, and acceptance along the way.

Although Pandher strives to spread positivity, he isn’t immune to ignorant and hateful comments on social media.

“I know that on my different videos, especially the video I made with Canadian Armed Forces, some people leave really, really bad comments,” he said.

“I could have deleted them too, but then it means that I would allow myself to be influenced by those comments. I have strong will power that those thoughts, those comments can never stop my journey.”

“And I also feel that people that have those type of thoughts, they also need more light. They need more [of these] videos and diverse information so that they can start understanding more and more.”

Pandher admits that at one point, he too was ignorant about a particular group of people when first coming to Canada.

“When I moved [here] I didn’t know much about the Indigenous people of Canada. So like many people, I was ignorant.”

But as Pandher learned more about Indigenous peoples, their diverse cultures, and traditions, he “started realizing that [they] are beautiful people with such a marvellous history of thousands of years.”

“I started to feel like they are just like a part of my family. How it happened was because I started learning about their history, their culture, so that transformed me completely and it changed my views and it changed me totally.”

In his latest video, Pandher wanted to show his appreciation for Indigenous culture by travelling to the remote Vuntut Gwitchin First Nation in northern Yukon to dance with Chief Dana Tizya-Tramm.

“It was really, really marvellous to make a bhangra video over there […] It’s so important to bring [together] a new culture which I belong to and a very ancient culture — those people have lived there for [thousands of years] and many people don’t know about it. And it’s great to connect with those people.”

Educating and sharing different cultural points of view and experiences is something Pandher believes will hopefully help people shed their ignorance and divisiveness and come together.

He points out that amongst the hate, there are many “thoughtful and caring Canadians” who respond to the negativity he receives in a “wonderful way.”

“I seldom have to do that myself. That’s why I also feel that there are lots of constructive and amazing Canadians who carry human values and defend positive creative works, for example, my videos. It makes me feel cared [for]  and inspires to keep going on.”

“We are all different and we must recognize that. But despite those differences, we can still connect and we can still form friendships, communities, and relationships,” he said.