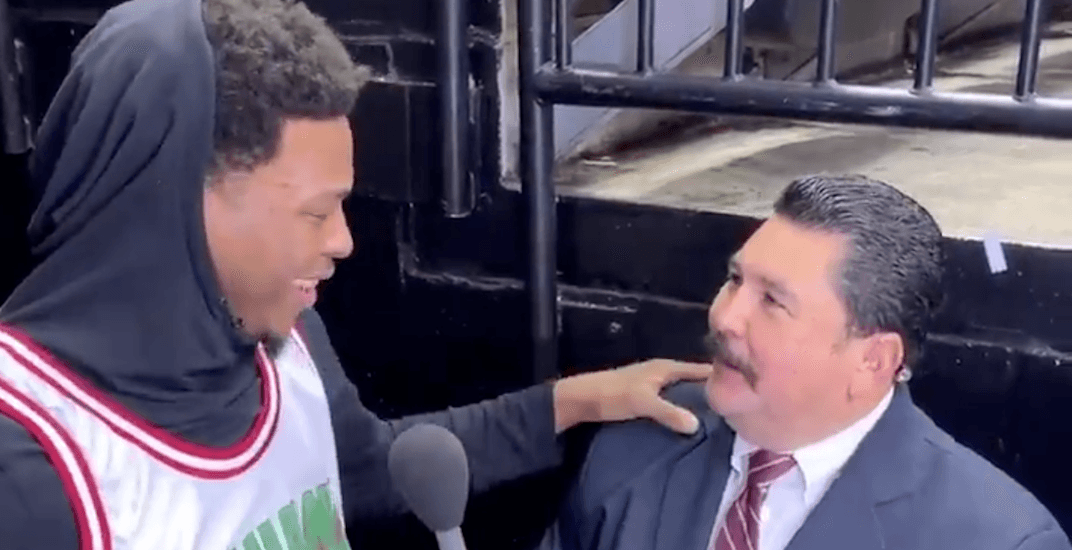 Who was the biggest star during NBA Finals Media Day on Thursday? Kawhi? Kyle? Draymond? Klay? No, it was an innocent, likeable parking lot security guard simply known as “Guillermo.”

The popular sidekick from Jimmy Kimmel Live stole the show and was front and centre for most of the antics during the Raptors-Warriors Media Day at Scotiabank Arena on Wednesday.

Guillermo started off by trying to convince Raptors’ OG Anunoby to take a “Canadian Shot,” which constituted of some sort of mystery liquid and a dash of maple syrup. Just before knocking it back, Anunoby came up with the hilarious response, “I’m allergic.”

Norman Powell was the next Raps player to field questions from Guillermo. His hard-hitting questions ranged from, “what’s a Raptor,” to “do you want to do a shot?” Unlike Powell’s teammate, Norm obliged.

Guillermo went from softball questions on the Raptors side to Barbara Walters-esque hard-hitting queries for the Warriors. Alfozno McKinnie was the recipient of this pseudo jab by Guillermo about Kevin Durant’s potential whereabouts next season.

“What are you gonna miss the most about Kevin Durant… you know he’s going to NY?”

Next to the birth of his child and defeating the Bucks in the Eastern Conference Finals, this might be the happiest Fred VanVleet’s ever been.

Not exactly known for his shot-making prowess, Guillermo took the court with the Warriors players for shoot-around. He missed eight straight shots before sinking his ninth attempt, AKA the same three-point playoff shooting percentage as Danny Green.

In an attempt to sway Kyle Lowry to play for the Mexican league, Guillermo presented Lowry with some sort of Tijuana team uniform.

Good luck prying him away from the Raptors.