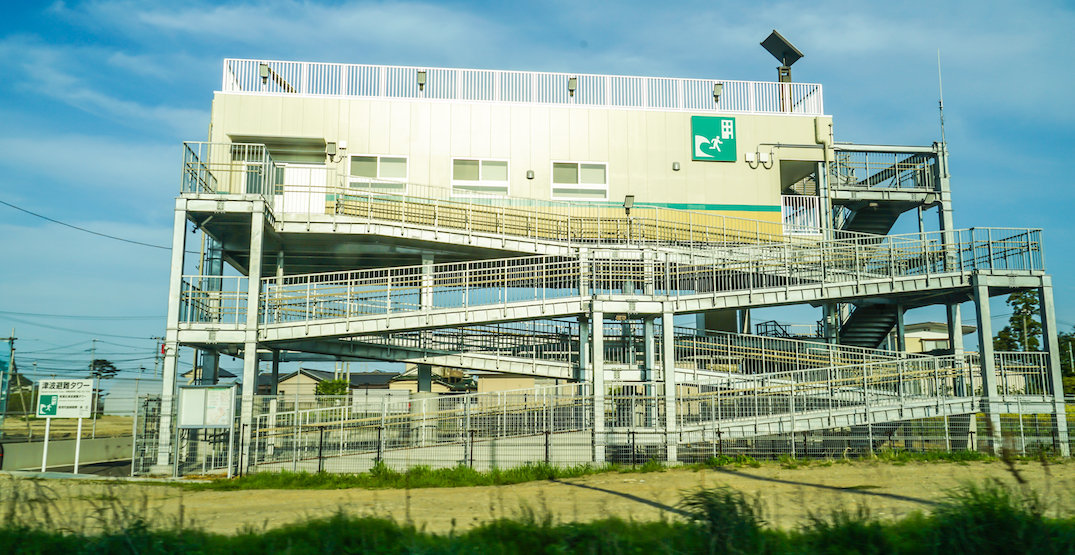 Example of a tsunami evacuation tower in Sendai City in Miyagi Prefecture in Japan. (Shutterstock)

An extensive seismic retrofit of Gudangaay Tlaat’sa Naay Secondary School in the community of Masset in BC’s Haida Gwaii will include the construction of Canada’s first-ever tsunami evacuation tower.

The school is located right next to inlet waters, making it prone to the destructive effects of a major tsunami.

Construction on the upgrades to the school buildings and the new vertical evacuation tower is expected to begin in summer 2021 for a completion by fall 2021. The new tower will be a 10-metre (33-ft) tall steel structure built on school property that includes storage for emergency supplies.

Currently, the evacuation safe zone is over 10 km away from the school, but after a powerful earthquake the roads leading to the safe zone could be damaged beyond usability.

“The tsunami evacuation route currently recommended for our students and community is around a 10-kilometre drive down the highway. The majority of this drive takes place at sea level along the Masset Inlet. As a mother who has had to evacuate her family multiple times over the past eight years, I can tell you it is frightening and beyond stressful,” said Keshia Chutter, member of the Haida Gwaii School District Parent Advisory Committee, in a statement.

Japan has purposed evacuation towers for its tsunami-prone areas for decades, which can safely accommodate as many as hundreds of people on elevated platforms supported by structures built to withstand the force of the tsunami waves. Such structures are typically supported only by columns, allowing water to pass underneath the platform.

The first structure of its kind in North America was completed for a coastal elementary school in Washington State in 2016.

The upgrades to Gudangaay will also amalgamate the school’s Kindergarten to Grade 12 buildings, allowing for improved education outcomes and operational cost efficiencies.

This project is part of the provincial government’s strategy to upgrade or replace dozens of seismically vulnerable schools through the acceleration of the Seismic Mitigation Program.