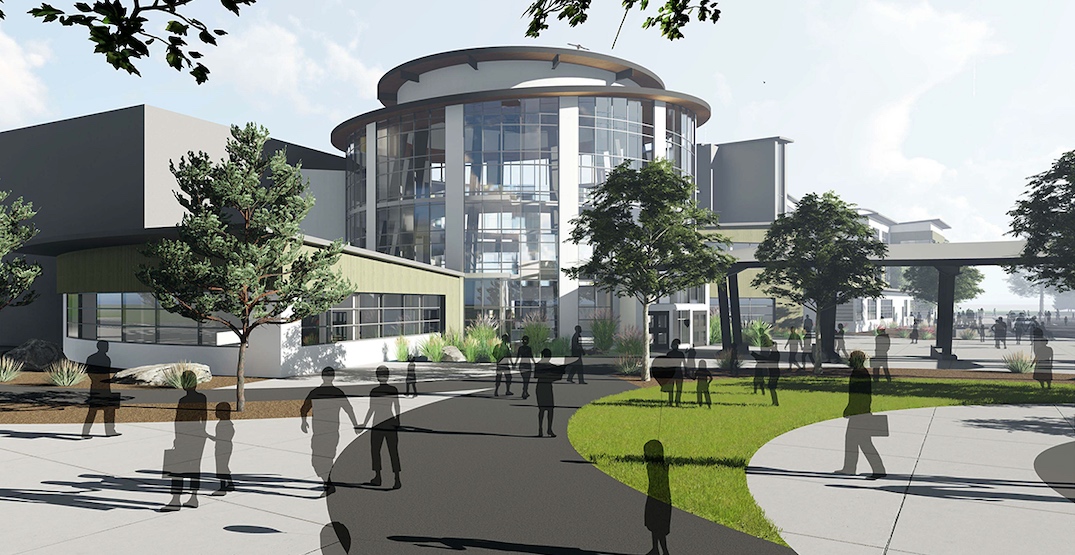 Artistic rendering of Grandview Heights Secondary School, currently under construction for an opening in September 2021. It will have a capacity for 1,500 students. (Surrey Schools)

Population growth, aging structures, and the unintended permanence of portable structures have prompted Surrey’s school district to push for a $1.4-billion capital plan.

Surrey Schools’ board approved both the long-range facility and five-year plans in a meeting last week.

There are currently 20 fully-funded active capital projects under construction or in design, including the major projects of the expanded Sullivan Heights and new Grandview Heights secondary schools. Another six projects have preliminary funding support in the planning or business case development stage. 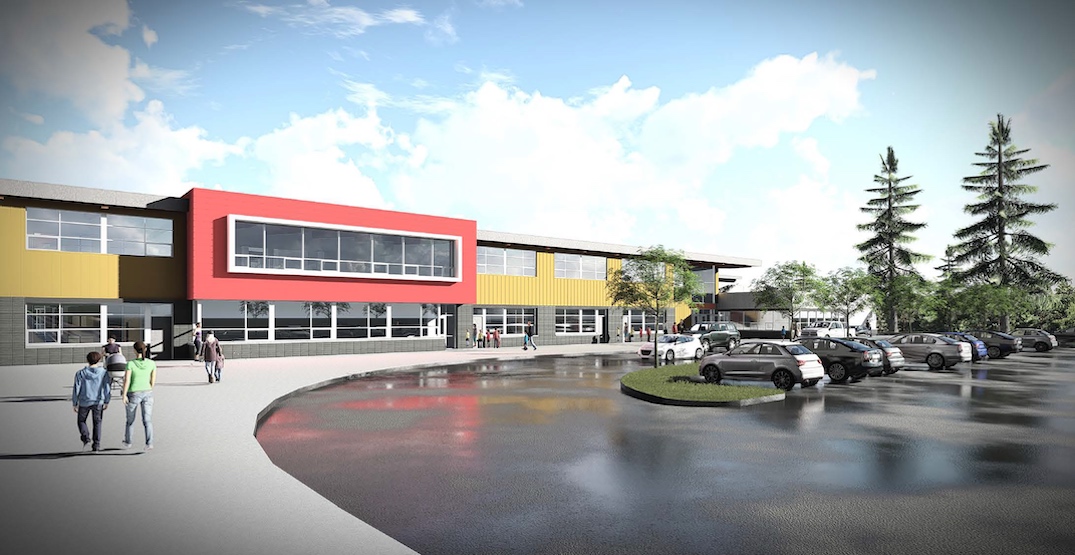 Artistic rendering of the new Douglas Elementary School, currently under construction for an opening in November 2020. It will create 25 new classrooms. (Surrey Schools)

The locations of the new and expanded elementary and secondary schools takes into account the new residential development in newer communities, such as Grandview Heights and South Newton.

A new 1,200-student capacity secondary school is planned for Newton, and the existing Tamanawis, Guildford Park, Kwantlen Park, Frank Hurt, and Fraser Heights secondary schools will each see their capacities increased by about 50% to up to 1,700 students.

Artistic rendering of the Sullivan Heights Secondary School expansion, currently under construction for an opening in November 2021. It will create 28 additional classrooms. (Surrey Schools)

Other considerations entail the recent changes to increase housing density and population in new approved land use plans and amendments to existing plans, and the future Surrey-Langley SkyTrain extension of the Expo Line along the Fraser Highway, which will catalyze high-density residential.

Surrey’s population is forecast to rise by over 262,000 people over the next 30 years. The school district expects to see its enrolment growth continue at a rate of approximately 1,000 students annually. 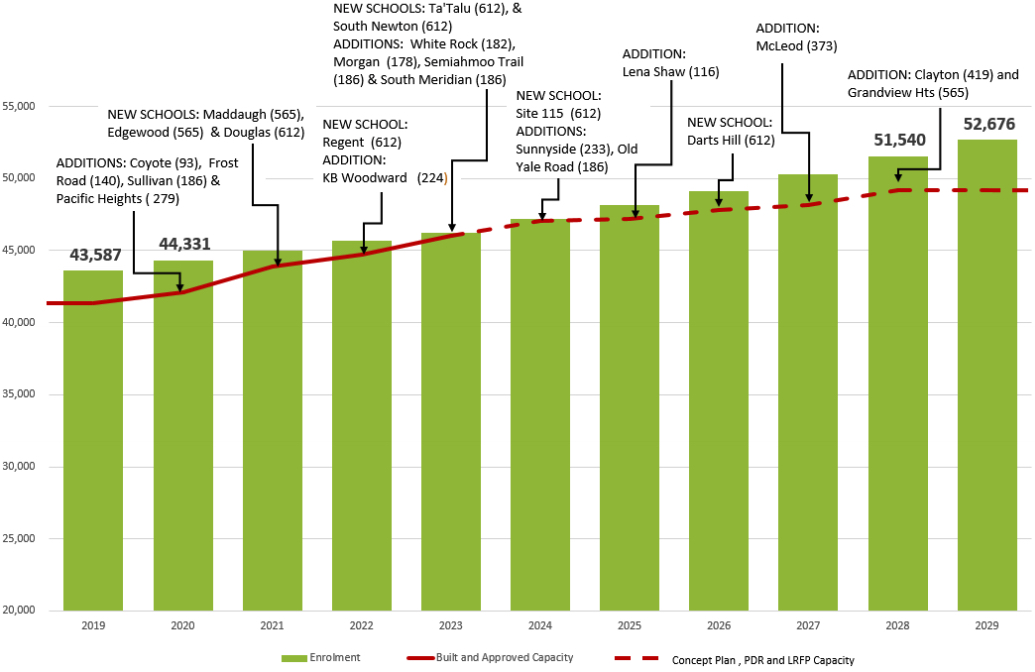 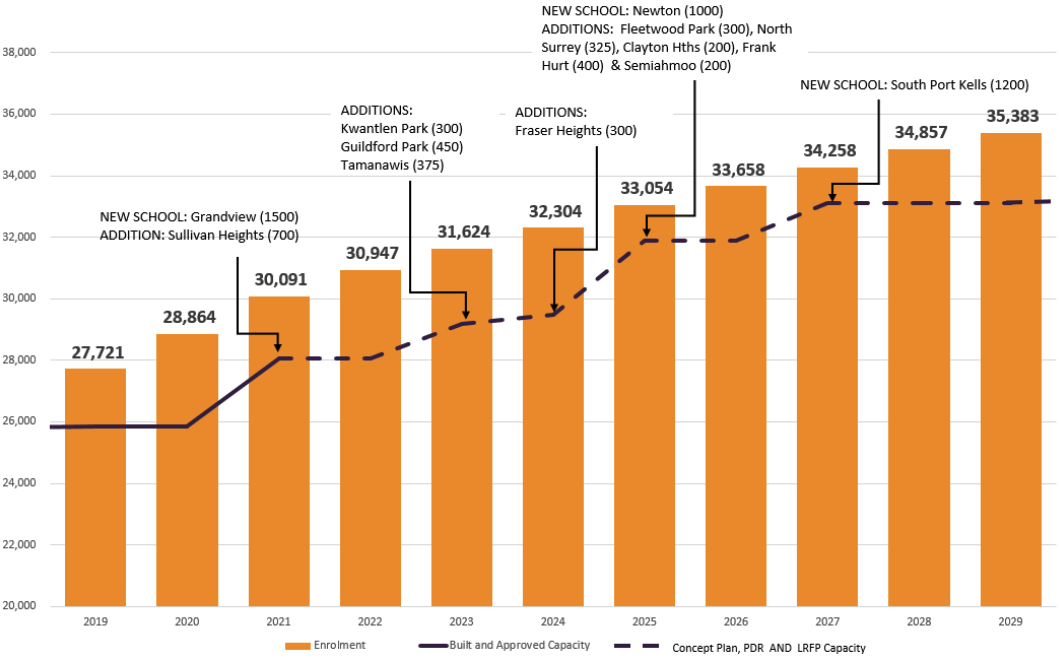 This capital plan for new and expanded schools also allows the school district to significantly reduce the number and reliance on portable structures.

Last year, roughly 7,000 out of about 73,000 students — both domestic and international — were educated in a portable structure, equivalent to nearly one in 10 students.