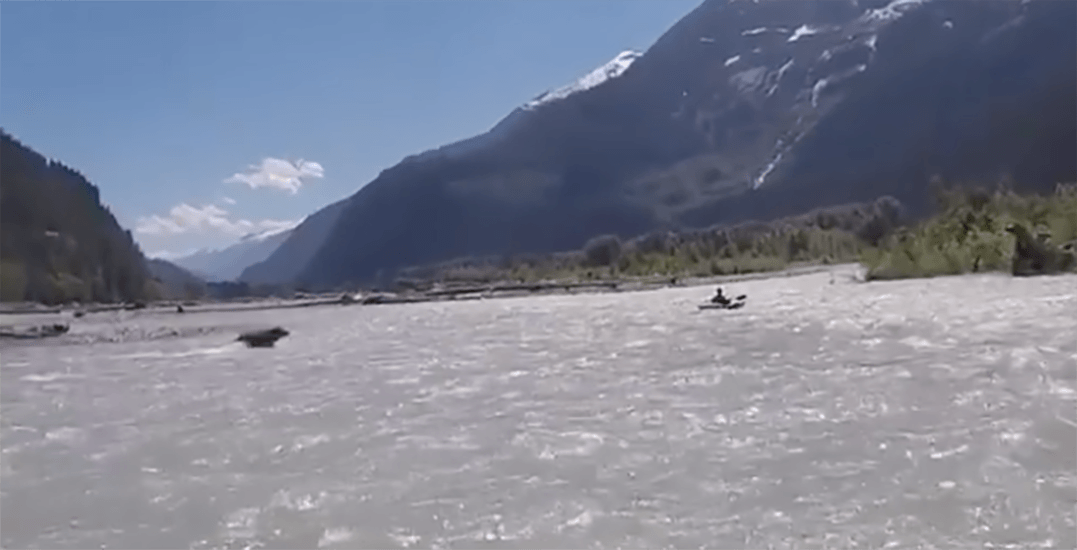 A recently uploaded Instagram video is showing a kayaker’s fearsome encounter with a grizzly bear.

The video was posted by Corey Boux, a tour guide for Wedge Rafting at Tag Whistler.

The encounter took place on the Elaho River in Squamish, a body of water known for its whitewater rafting and kayaking, as well as its alpine scenery.

Boux was co-guiding a tour with three other rafts when a grizzly bear appears to charge after the safety kayaker in the front of the group.

The majority of the encounter was caught on Boux’s GoPro camera and shared shortly after.

The video shows the grizzly bear charging directly at the kayaker, making it more than halfway through the width of the river before slowing down.

The lead kayaker continues to move downstream and evade the bear; the three rafts in the group were also able to move past the bear safely.

Boux observed that the bear was guarding a dead elk and caught sight of the kayaker and rafts. He explained further in the comments that grizzly bears can be very unpredictable, especially when guarding a food source.

If you ever encounter a bear, remember to stay calm, stand still, speak calmly, and slowly back away. Especially in the wilderness, make sure that the bear has a clear way to exit the area and once the bear has started to leave, continue to back away.

You can also prevent encounters by making yourself known to the bears and avoiding surprise. It’s also wise to stay away from dead animals (bears will often attack to defend such food, as seen above) and keep pets on leashes to minimize conflict.

For more information on what to do if you encounter a bear, read here.