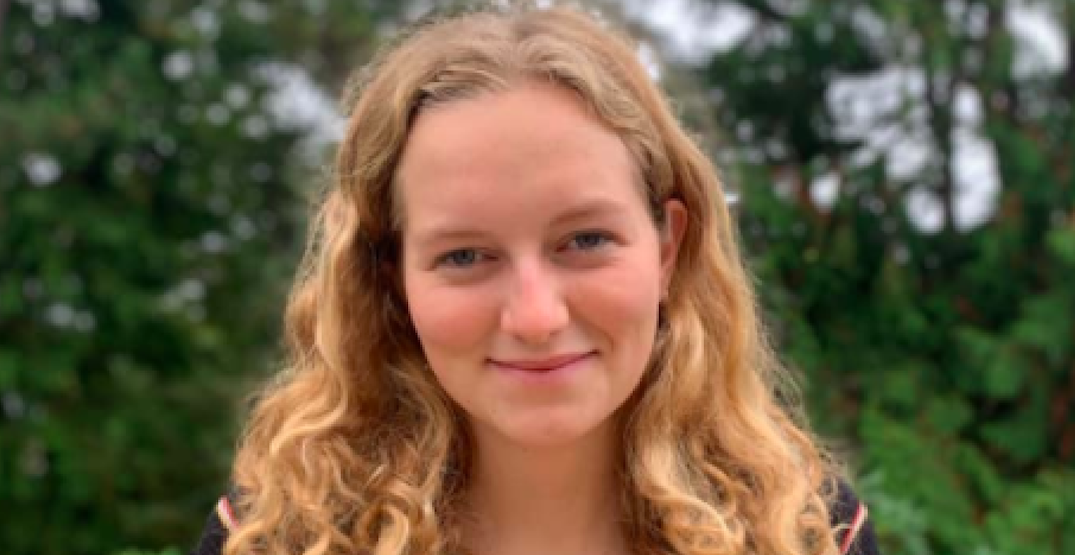 She may have just turned old enough to vote, but Kate O’Connor is setting her sights beyond just the ballot box in BC’s provincial election this Saturday.

In fact, when voters head to the polls in her riding of Saanich South, they will see her name on the ballot itself.

At the age of 18 – the minimum age required to run in a provincial election – O’Connor is running as a candidate with the BC Green Party.

She told Daily Hive she decided to run as a candidate because she believes “in the value of intergenerational leadership.” And she chose to run with the Greens because “we need to inject urgency into our climate action plan, while recognizing that there can be no climate justice without social justice.”

Now, with less than three days to go until election day, O’Connor said her campaign has been “exciting” and “very” busy.

“I’ve been doing interviews, making calls and door knocking with the team,” she said. “I’ve spent lots of time in the community, talking to constituents and hearing about what issues matter to them.”

And when it comes to the response she’s seeing from people, O’Connor said there “has been an outpouring of support. So many people, both young and older, are happy to see a young person running and getting involved in politics.”

Part of her motivation to run, she said, is because “there’s a vicious cycle where young people are criticized for not being involved in politics and then when they try to become involved they’re told that they’re too young. I’m running, in part, to try and break this cycle.”

Before graduating high school this past June, O’Connor had co-founded a political review, was co-head of the politics club, and co-hosted an all-candidates debate in the 2019 federal election.

This summer, after working at a grocery store on Pender Island, she became involved in Sonia Furstenau’s campaign to run for – and ultimately win – leadership of the BC Green Party.

And during these last few weeks, O’Connor said she has “had the opportunity to go and speak to several high school classes and talk to young people about how they can become more politically involved.”

It’s been encouraging, she added, “to have young people, some who’ve never been involved in politics before, join the campaign and get excited.”

And while O’Connor isn’t the only candidate under the age of 20 running in this election, (both the NDP and the Liberals have 19-year-olds on the ballots), she would be the youngest MLA in BC history if elected. She registered to run while still 17, but was eligible because her 18th birthday came before election day – October 9, to be exact.

In total, the Green Party has seven candidates under 30 years old, the BC NDP has six and the BC Liberals have two. By comparison, 35-year-old the NDP’s Bowinn Ma held the title of youngest MLA in the last legislature. Ma is seeking re-election in the riding of North Vancouver-Lonsdale.

When asked what her biggest takeaway from this experience – win or lose – would be, O’Connor said it’s “more important than ever” to participate in politics and make sure that young people’s voices are heard.

“In this crucial time in history as we’re on the brink of a climate crisis… we will be the ones facing the consequences of the decisions made in the legislature today,” she said.

Her campaign “shows young people that they don’t have to feel alienated and disconnected from participating in formal politics,” she added.

O’Connor is running against incumbent Lana Popham, who served as Minister of Agriculture, as well as BC Liberals candidate Rishi Sharma.

Voting day is this Saturday, October 24.