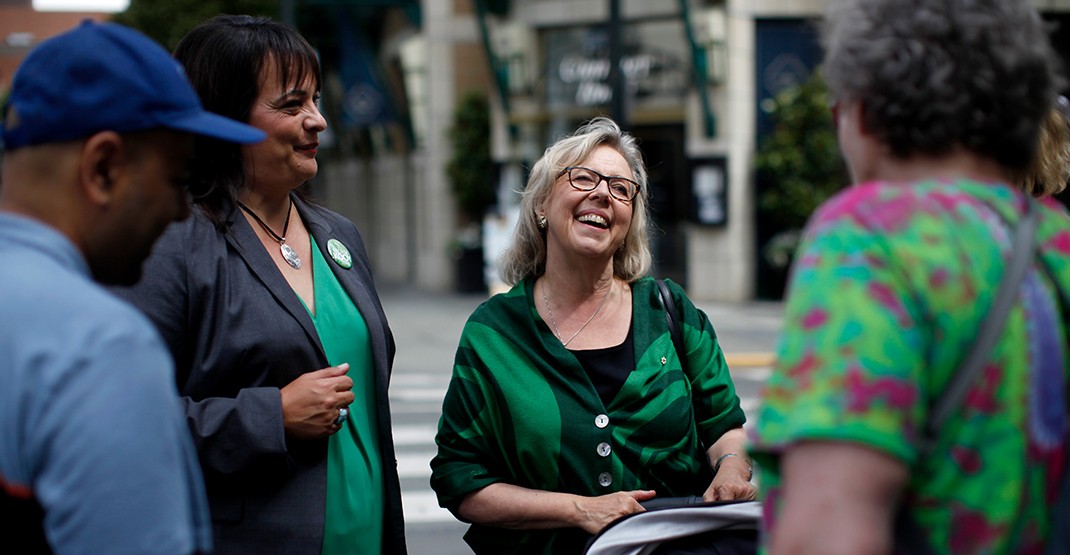 Elizabeth May (image courtesy of Green Party of Canada)

A Green government would “level the playing field” by implementing taxes on companies like Facebook and Netflix, leader Elizabeth May promised today during a campaign stop in all-important Quebec, where the issue has particular traction.

May was in Montreal to promote a Green strategy for foreign internet-based companies that she said she’s confident will have the intended effect of helping to protect Quebec culture.

The plan would include making sure tech companies charge GST as well as taxes on revenue, and aim to close loopholes around advertising tax write-offs the party says encourage digital advertising to the detriment of local media.

She said leaving the situation as-is is “too large a risk” for the country.

“The culture of Quebec needs to be protected from content that streams into our homes online that has nothing to do with Canada,” she said.

May was with several Green candidates, including Pierre Nantel, an NDP MP who switched to run for the Greens late in the summer.

Nantel has long argued for stronger protections for Quebec’s cultural sector, and was critical of a deal the Liberal government struck with Netflix in 2017 that committed the content giant to spending $500 million in Canada without specifically earmarking dollars for Quebec productions.

May said under a Green government Quebec would have a veto on similar agreements that affect Quebec culture.

The Green leader had previously had to deal with accusations her party was overly friendly to Quebec separatism after it welcomed Nantel, an avowed sovereigntist, into its ranks.

May also highlighted a promise to spend an additional $300 million per year on the CBC and Radio-Canada to help bring its funding up to a per-capita level comparable to the BBC in the United Kingdom.

She said Canada should ensure Radio-Canada is able to provide high-quality broadcasting and can reach francophones outside of Quebec, and that Quebec has a “right to have content that is Canadian.”

May said the support for cultural industries fits within the wider aim of creating a green economy.

May made a second announcement later Wednesday in Montreal, this one about affordable housing.

Speaking with the party’s deputy leader and Outremont riding candidate Daniel Green, she emphasized the importance of affordable housing in the Green platform.

May highlighted a platform promise to build 25,000 new affordable housing units and 15,000 rehabilitated units every year for the next decade. The Green promise is to tailor affordable housing strategy to individual provincial needs.

She also exchanged some barbs with NDP Leader Jagmeet Singh, who was also in Montreal in advance of Thursday night’s French-language leaders’ debate.

She said it was not fair of Singh to tell a meeting of public employees that the Greens were “no friend” to labour. May specifically cited a plan aimed at revitalizing Canada Post that she said disproves Singh’s argument.

The Green party has a strong commitment to social justice and a real plan for the environment, she argued.