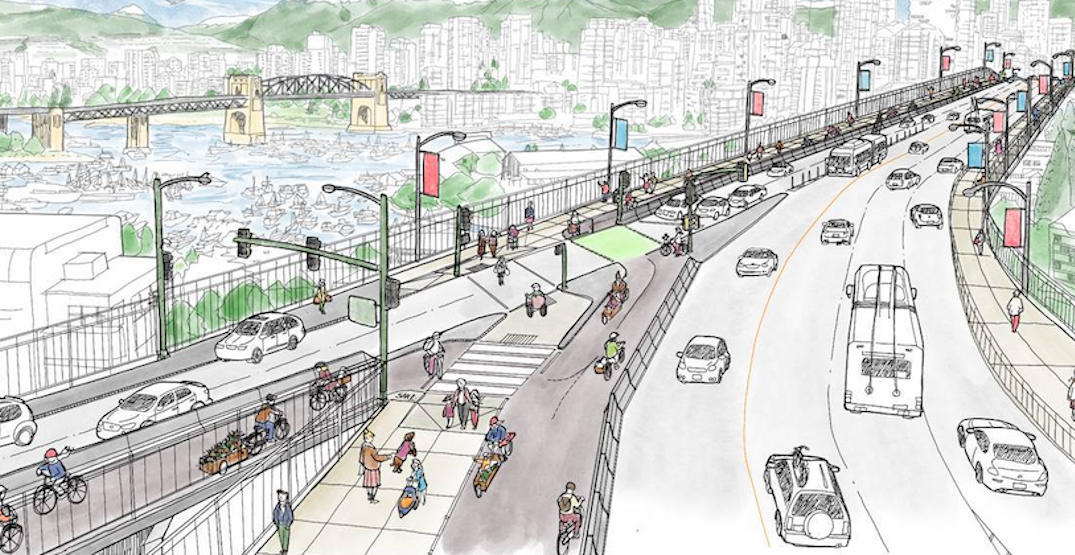 The City of Vancouver’s fiscal situation as a result of COVID-19 is forcing planners to ask city council to consider a scaled back Granville Bridge Connector, with the remaining components and features originally envisioned built over the longer term when more funding is readily available.

A city staff report for city council’s consideration next week seeks approval of the recommended “West Side Plus” design configuration that was presented early this year.

The option entails placing the pedestrian pathway and bidirectional separated bike lane on the west side of the bridge, which will reduce the number of vehicle lanes on the bridge from eight to six, with three narrower vehicle lanes retained in each direction. Traffic signals will be installed on the bridge for the pathway’s crossings across the Fir Street and Howe Street ramps. 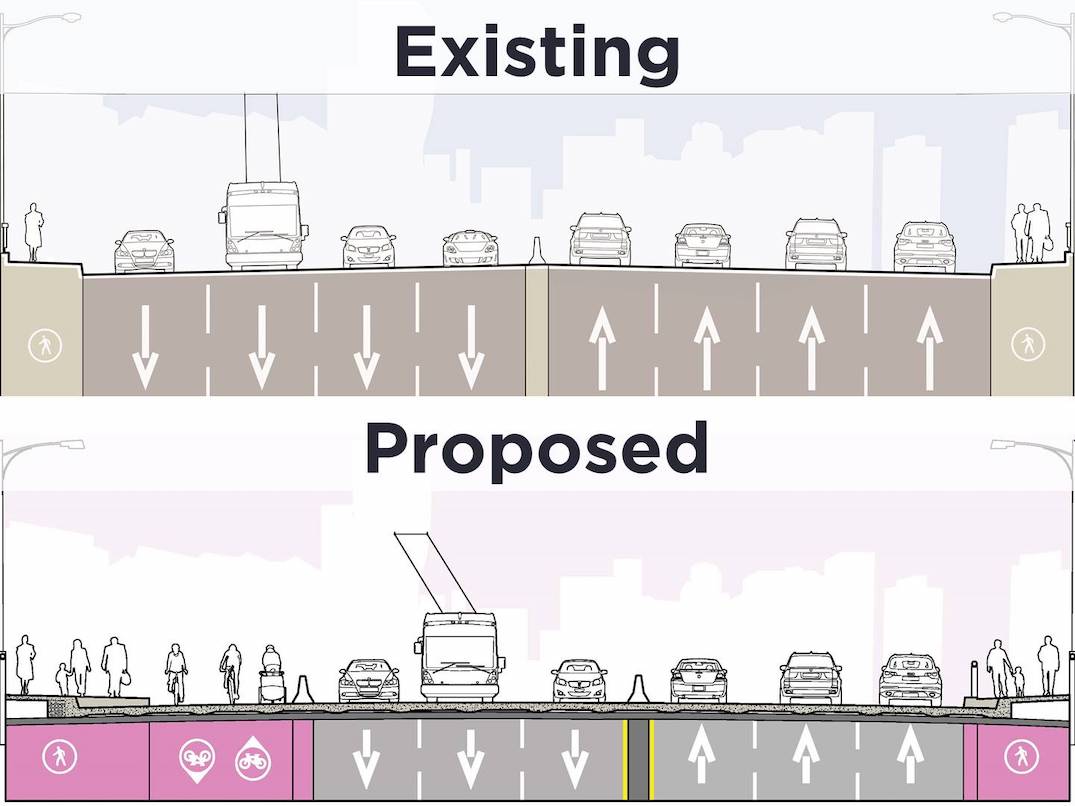 However, to cut down the costs over the interim, these ramp and east side components have been deferred.

The 2019-22 capital plan originally set aside $25 million for the Granville Bridge Connector, which will have a full cost of $39 million spanning multiple capital plans.

With city staff’s downsized project, the cost of the current scope of work within the current capital plan will be reduced to $12.5 million, including $1 million for detailed design of the “interim connector” and $11.5 million for construction. Another $2 million was previously approved. 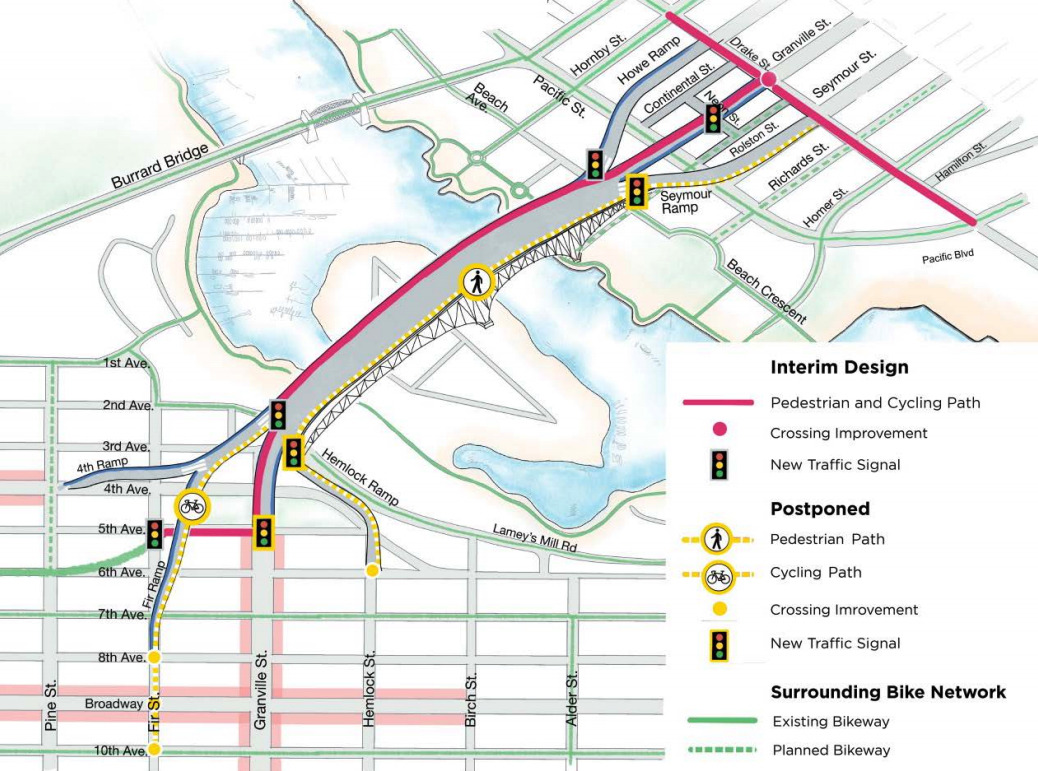 City staff assert the bridge has ample capacity to allow for the reduction in vehicle lanes, and acknowledge that there could be a slight increase in travel times for vehicles as a result of the new traffic signals.

The bridge normally sees an average of 65,000 vehicle crossings and 25,000 bus transit trips per day, with six bus routes running a combined total of nearly 80 buses per hour during peak periods. As an extension of the Highway 99 corridor, the bridge is a vital link for the regional transportation network.

The municipal government has been targeting improvements on the Granville Bridge for pedestrians and cyclists for some years, given that the existing pedestrian sidewalks are narrow and perceived as unsafe, and there is an absence of dedicated bike lanes.

The bridge’s new suicide-prevention fencing and possible elevator and staircase tower to Granville Island are part of the future scopes.

Additionally, as part of a single package, city council is also being asked to endorse the design of the Drake Street bike lane, which city staff have been deemed to be “essential to the functioning of the Granville Bridge Connector.” This will connect the on-bridge pedestrian pathway and bike lane with improved pedestrian infrastructure and the network of bike lanes in downtown.

The Drake Street changes for cycling will stretch from Burrard Street to Pacific Boulevard, intersecting with the entrance onto the Granville Bridge Connector. The recommended design will eliminate a westbound travel lane and a parking lane for a two-way protected bike lane on the south side of the street and wider sidewalks for pedestrians. In the process, Drake Street will be reduced to a single travel lane for vehicles in the eastbound direction.

The current capital plan pegged the Drake Street project at $9 million, but an interim design that uses lower quality materials and uses interim paint, planters, and limited concrete work will bring down the budget to $4.4 million, including $3.9 million that is already approved. 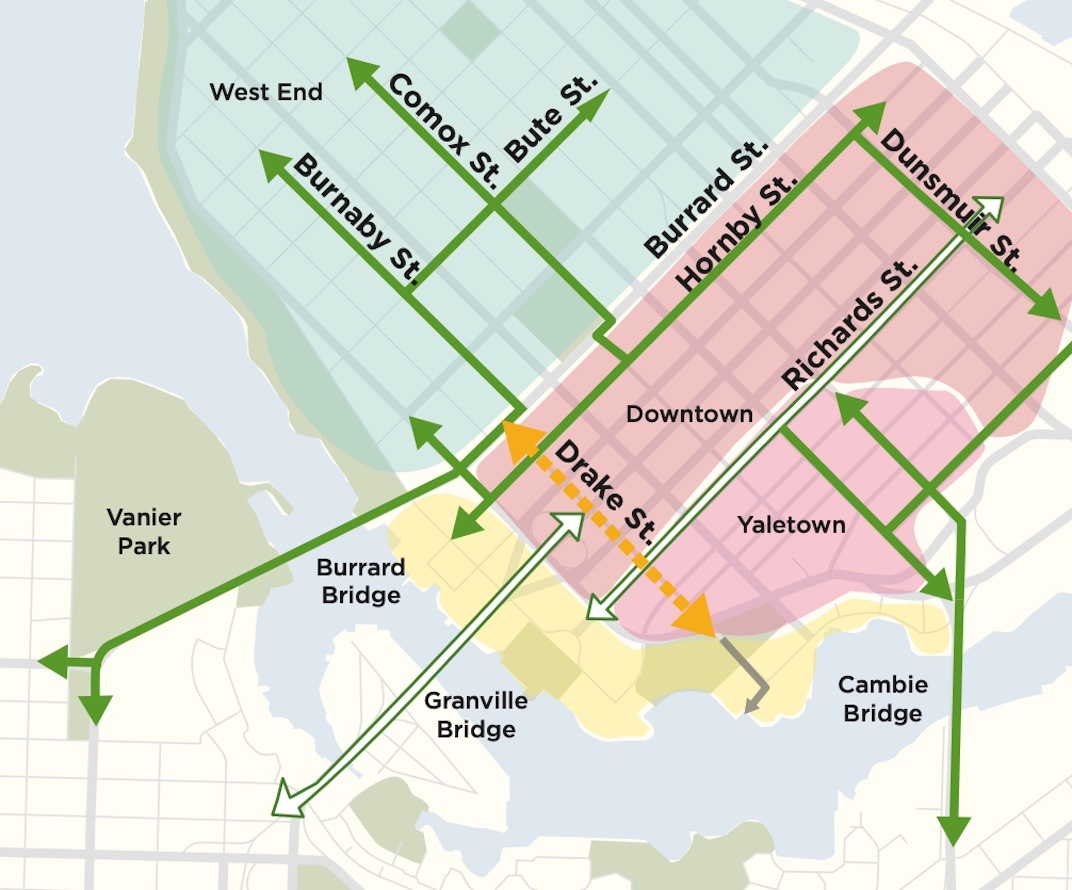 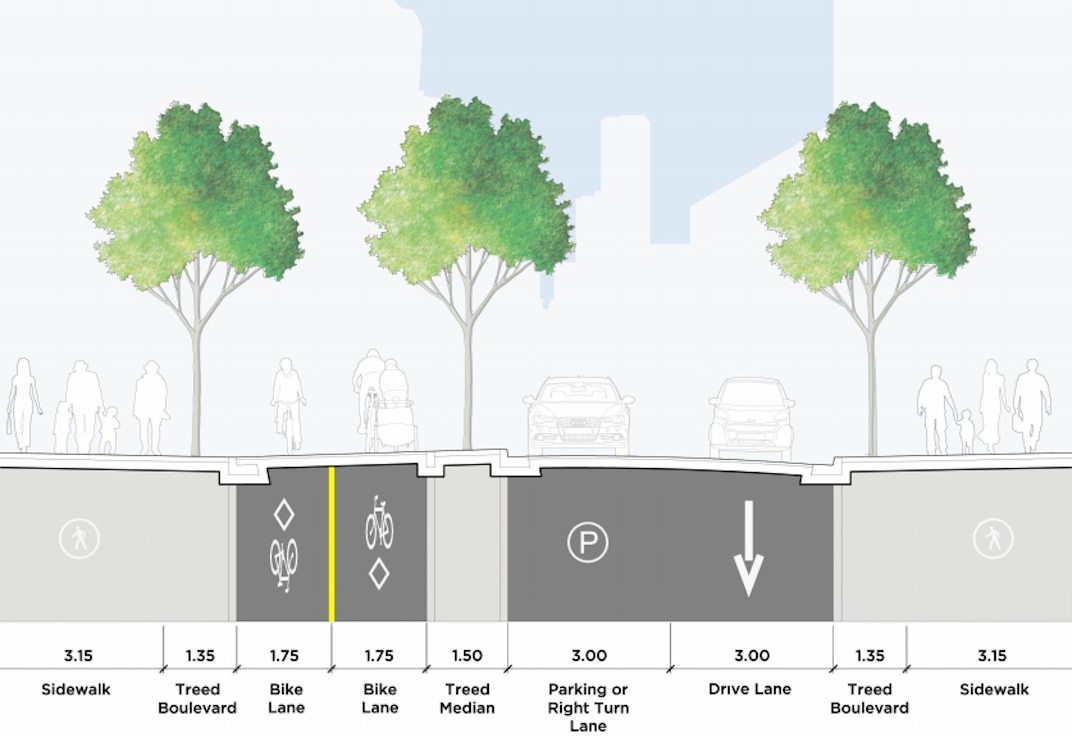 Additionally, both the construction of the interim Granville Bridge Connector and Drake Street changes will be closely coordinated with the demolition of the North Granville Loops on the north end of the bridge.

Both loops — ramps onto and off Pacific Street — will be replaced by an H-shaped street grid that accommodates new development. The city previously budgeted $18 million for the demolition and new streets on the footprint of the loops. 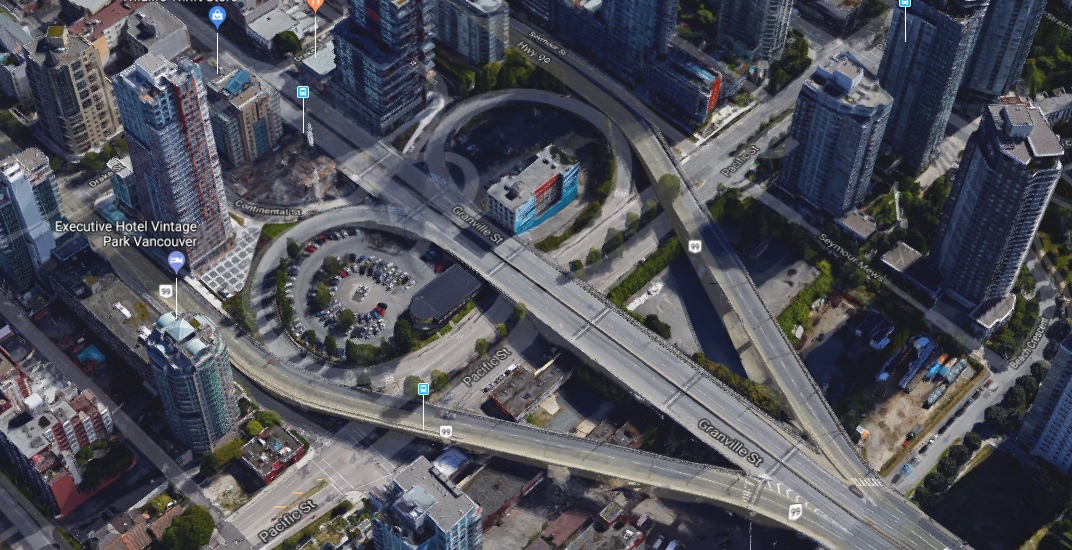 If the projects pass their next stage of approvals, the municipal government will aim to conduct detailed design work on both the Granville Bridge Connector and Drake Street changes through 2021. A contractor will be hired next year for the connector and loop projects, while city crews will be responsible for the Drake Street changes.

Construction will begin on the interim connector, Drake Street, and North Granville Loops replacement projects in 2022 for a completion in 2023.

In July, city staff proposed postponing $300 million worth of capital projects due to the collapse in real estate development revenue previously slated to help cover the cost of such new infrastructure. At the time, it was already noted that the Granville Brdige Connector and Drake Street bike lane would see deferred project scopes.