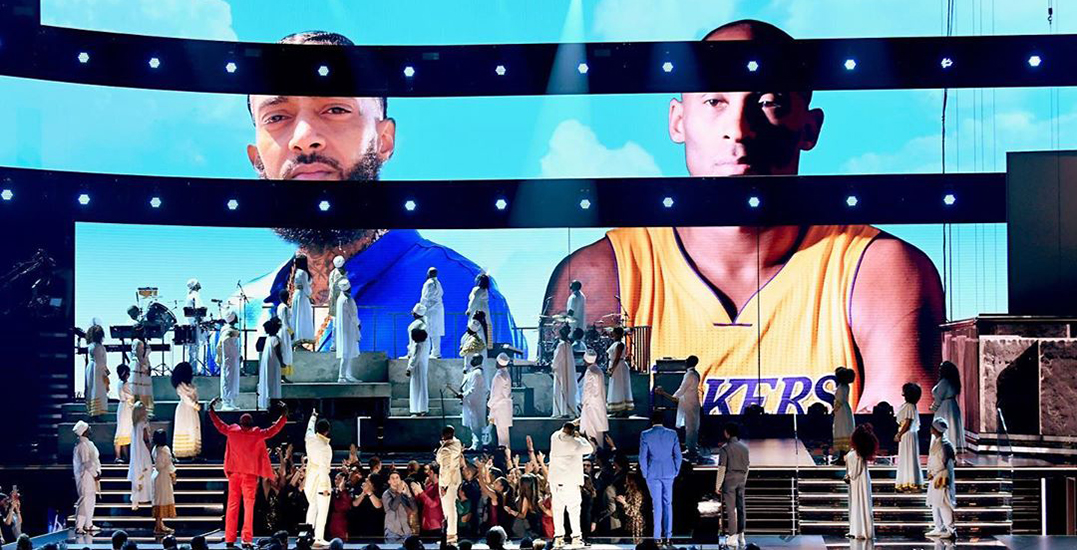 On Sunday morning, news broke that Kobe Bryant, one of the greatest basketball players of all time, passed away in a helicopter crash.

The 41-year-old was travelling in his private helicopter, with three others. LA Country Sheriffs later confirmed that there were five fatalities in the crash, including Gianna Maria Ono, Bryant’s 13-year-old daughter.

Later that night, the biggest names in the music industry took to Los Angeles for the 62nd annual Grammy Awards, which, fittingly enough, was held at Staples Center — the Lakers’ home arena. The evening was filled with tributes from artists and performers who mourned the loss of the basketball star and father.

During the entire night, both Bryant’s retired jerseys, number eight and 24, were raised and lit in the rafters of the Staples Center.

Kobe Bryant’s jerseys are illuminated in the rafters of the Staples Center during the Grammys. pic.twitter.com/Db2Y6u8BT1

Alicia Keys, who hosted the awards ceremony, began the night with a monologue and a performance with Boyz II Men.

“We are literally standing here heartbroken in the house that Kobe Bryant built.” Host @aliciakeys pays tribute to Kobe Bryant, his daughter and their family during her opening monologue at the #Grammys https://t.co/0BNpfw9wWV pic.twitter.com/9VzWZa2M8S

“We love you Kobe.” @aliciakeys and Boyz II Men sing in tribute to Kobe Bryant and his family at the opening of the #Grammys https://t.co/kk0nIau0ee pic.twitter.com/v3KpXSkvyW

“Tonight is for Kobe.” @Lizzo kicks off the #Grammys with a tribute to Kobe Bryant https://t.co/norpH2WJuw pic.twitter.com/iPyBPLmrJ9

A moving tribute to Kobe and Nipsey. #GRAMMYs pic.twitter.com/CbUCpqHVzz

Other celebrities who didn’t perform but were also in attendance at the Grammys, found smaller ways to pay homage to Bryant.

Priyanka Chopra’s tribute to Kobe Bryant: the number 24 on her fingernail. #GRAMMYs pic.twitter.com/dJiTBL0KSr

Outside of the stadium, hundreds of people gathered around to pay their respect, including Quinn Cook, a current Los Angeles Lakers point guard.

Just surreal at Staples Center – Kobe’s face on every screen as hundreds of people seem to just want to be somewhere they can cry together. Also: The Grammys are here tonight so there is the odd person wandering around in a tuxedo.
None of this feels real. pic.twitter.com/esukv1yNZs

He stood amongst the fans outside Staples Center with Kobe’s jersey clenched in his hands. 💔#RIPKobe (via @Skehps) pic.twitter.com/h5CXLh9DHh