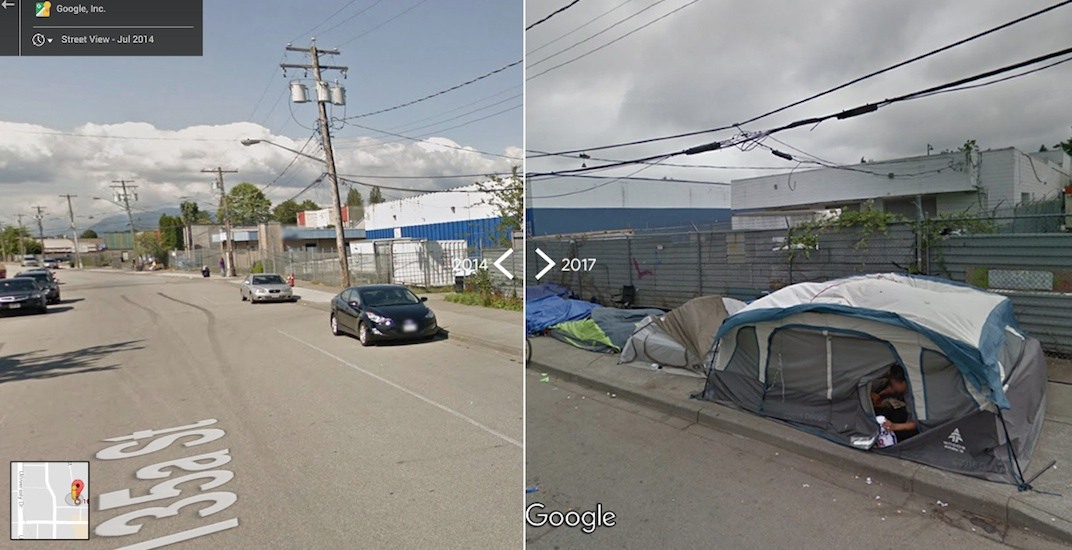 Homelessness comparison on the Whalley Strip in Surrey. (Google Maps)

Based on a count conducted earlier this year, homelessness in the city of Vancouver is up by 2% since last year and 24% since 2014.

But this pattern is also being experienced beyond the city’s boundaries; across Metro Vancouver, homelessness has increased by 30% over the same period, according to a separate count by the Regional District.

In every comparison, the most recent street view shows more clusters of homeless people and homeless encampments compared to the older street views.

“The Google Street View images in our campaign, much like the homeless counts, are just snapshots in time of a much larger issue,” said Aaron Munro, Associate Director of Raincity Housing, in a statement.

“The campaign images show homelessness in the Greater Vancouver Area is changing our cities, but that there is a solution in providing affordable and social housing, and we need to show our support around it. People who are supported in housing by RainCity have access to supports and live in places that are safer and more secure than remaining homeless.”

Street views comparing sites that are now built with social housing developments are also part of the campaign.

The provincial government’s ongoing $291-million initiative of building 2,000 temporary modular social housing units across BC over two years is key for reducing homelessness as the program targets those who are homeless or are at risk of being homeless. The bulk of these units are being built in Metro Vancouver, including $66 million to build 600 units within Vancouver.

As of today in Vancouver, 156 units are already built, 150 units are approved, and 100 units are in the development application stage.

Some of the modular housing projects have had drastic, immediate positive impacts: The tent city along 135a Street in Whalley disappeared within days after a 160-unit modular housing complex opened in Surrey opened earlier this week.

According to Raincity Housing, the actual homelessness number in Vancouver could be up to three times higher than the 24-hour count due to people staying with relatives, couch surfing, or just being really hard to find. The most recent count also found that over half of the city’s homeless population have been homeless for less than a year.