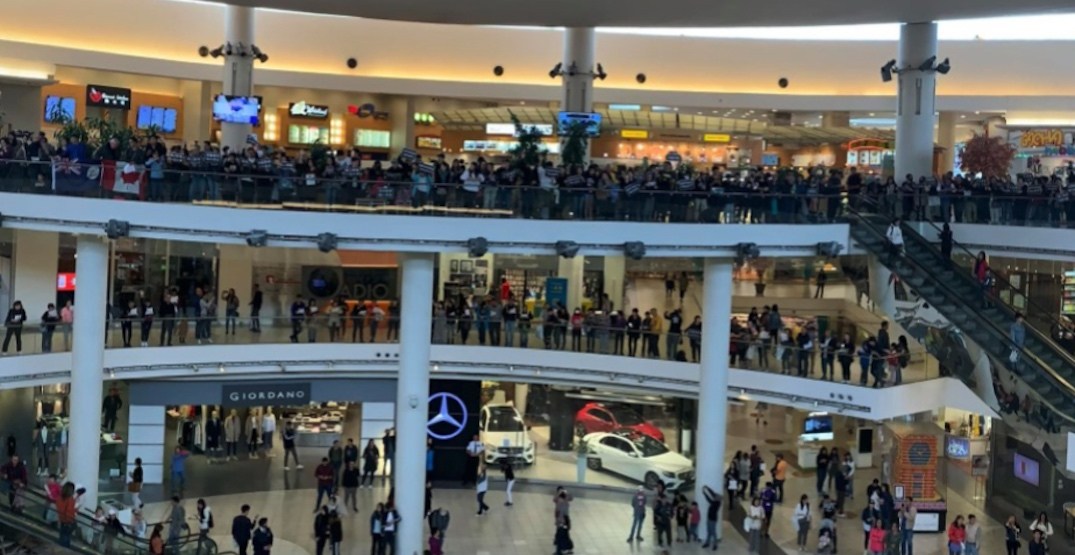 In the latest display of local solidarity, hundreds of Hong Kong pro-democracy supporters on Saturday amassed at the main atrium of Aberdeen Centre in Richmond for a rally in support of the continuing protest movement in the former British colony.

Photos and videos posted onto social media show protesters wore black clothing and sung “Glory to Hong Kong” — a new anonymously-made, viral song that has quickly been adopted by pro-democracy activists as their unofficial anthem. The song has been used in mass singalongs during protests in Hong Kong in recent weeks.

The Asian-oriented mall, comprised mainly of Chinese retailers, is owned by the Fairchild Group.

Another protest is also scheduled for the Vancouver Art Gallery’s North Plaza on Saturday, September 21 from 1 to 5 pm.

Over the weekend, Hong Kong entered its fifteenth consecutive week of protests, with the latest demonstrations — as well as scuffles between protesters and police — becoming increasingly more violent.

CNN reports police continued the use of tear gas and water cannon laced with a blue dye that marks protesters and makes them easier to arrest later. More fires were set and MTR subway stations were vandalized.

A total of 28 people were injured in Sunday’s activities, with several in serious condition.

Hong Kong’s summer of unrest began in early June with widespread calls to abolish the proposed extradition law, which was only recently completely removed from the legislative process by the city’s leadership.

The protest movement was initially over the extradition law, but public distrust with both government and police over their handling of the crisis has turned the movement into a broader outcry over Hong Kong’s social and economic inequalities, and concerns over Beijing’s growing creep into the special administrative region’s special autonomy.

Protesters are also demanding their government to establish an independent inquiry on police brutality, withdraw the characterization of the protests as “riots,” released arrested protesters, and implement universal suffrage in the city.