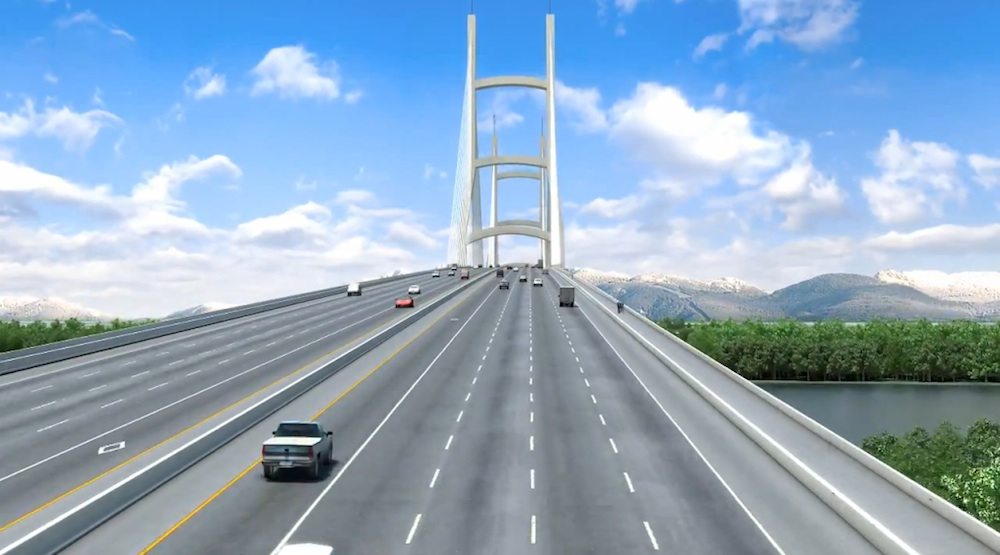 As anticipated, the project to replace the four-lane George Massey Tunnel with a new suspension bridge has received an environmental assessment approval from Environment Minister Mary Polak and Community, Sport and Cultural Development Minister Peter Fassbender.

Plans for the new 10-lane bridge across the south arm of the Fraser River, built right next to the tunnel, which will be demolished, were announced by Premier Christy Clark in 2012.

The $3.5-billion project also includes replacing three Highway 99 interchanges – Westminster Highway, Steveston Highway, and Highway 17 A – along the route to the new bridge. As well, Highway 99 will be widened from the south end of the Oak Street Bridge to Highway 91 in Delta for designated HOV/bus lanes.

“The decision was made after considering a review led by British Columbia’s Environmental Assessment Office,” reads a release. “The ministers have issued the certificate with legally enforceable conditions that have given them the confidence to conclude that the project will be constructed and operated in a way that ensures no significant adverse effects are likely to occur.”

However, the project by the Ministry of Transportation must abide to 33 legally-binding conditions that are part of the granted Environmental Assessment Certificate. This includes considerations for fish and fish habitat by restoring Green Sough and Deas Slough and ensuring marine users and fisheries have access to the channel during the construction process.

There were some concerns from some groups that the decommissioning of the existing tunnel will lead to larger vessels venturing into the Fraser River to access port facilities further upstream, but in the release today the provincial government maintains this is not the case.

The Massey Tunnel is a pre-fabricated tunnel that sits on the bed of the Fraser River and protected from ship collisions by a layer of rocks. The removal of the tunnel could theoretically allow for larger ships.

Last month, to prepare for the expanded shift in traffic from the Massey Tunnel replacement, the Ministry of Transportation announced a $70-million project to add a counterflow-controlled seventh lane onto the Alex Fraser Bridge. The new counterflow lane will be ready by spring 2018.

Today’s environmental assessment approval for the Massey Tunnel replacement project puts the project closer to the construction phase, which is scheduled to begin later this year for a completion in 2022. The project is not subject to a federal-level environmental review.